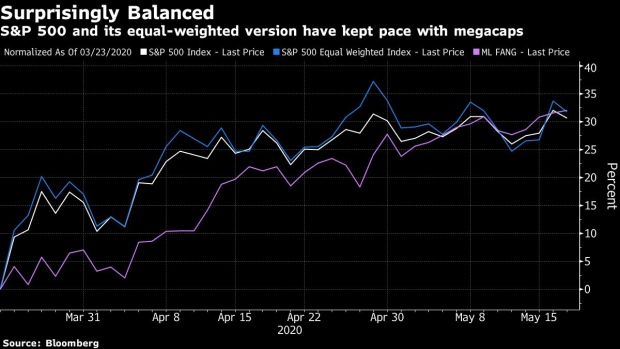 (Bloomberg) -- Quick, which industries have had the biggest gains in stocks since everything crashed in March? What’s that? Technology and health care, you said?

It’s a truism of the market that the only thing rising in equities over the last eight weeks was a tiny cohort of online giants and pandemic drugmakers built to weather a lockdown. On an equal-weight basis, at least, the biggest winners hail from seemingly improbable industries such as automobiles and energy.

True, those rankings are mostly a function of bounces in groups that fell the most during the sell-off, but the data highlight an under-emphasized fact of investor life over the last two months. For all the mud that gets thrown at the rally for its supposed hyper-concentration, at least since the bottom, it has been a story of remarkably balanced participation.

Strength in the Fangs gets all the press, and rightly so since their overwhelming size gives them the most sway, but just as notable has been the retracing of declines that at one point sent stocks like Noble Energy and Halliburton down more than 70%. Focusing solely on tech and health care sells short the role of the central bank in securing the rally and gives a false impression of its vigor.

“When the Fed stepped in, you had all these companies that had their existential risks removed and then sprung back like a rubber band,” said Peter Mallouk, president and co-chief investment officer of Creative Planning. “They’re doing about the same since the recovery.

The reason many investors put the rally down to tech and health-care is captured in what makes them stand out -- strong balance sheets and products useful in the work-from-home world. Any time anxiety hits the stock market, equity money flows to the Fang cohort and companies that might find treatments for the virus. That dynamic played out Tuesday as the Nasdaq 100 outperformed the S&P 500 by 0.7 percentage point.

But Monday was more indicative of the tenor of really big sessions during the eight-week rally -- days when the lion’s share of the rebound has occurred. Small caps surged, cruise ship operators and hotel chains jumped more than 10% while purveyors of toilet paper and soup plunged.

Such big gaps in returns between the days when large-gap growth companies outperformed and those when small-cap value did better have persisted since the S&P 500’s nadir in March.

Specifically, the broad benchmark has climbed an average 1.6% a day when investors broadened their order list and scooped up smaller companies trading at lower valuations. That compares with a paltry 0.1% gain when safety was sought in big firms with faster growth, data compiled by Cornerstone Macro show.

“It’s rational that if people are looking for places to hide that they’re going to go to the areas that are weathering the storm best,” said David Donabedian, chief investment officer of CIBC Private Wealth Management. “And on days when they’re feeling more bullish about the potential for perhaps a quicker-than-expected recovery in the economy, either driven by reopening or hopes for a vaccine, that you’d go to the beaten down stuff.”

While the swift rotation can be frustrating, it helps the market build a sturdier foundation than relying on one or two sectors to shoulder the gains. The equal-weight S&P 500 index that strips out the market cap bias is up 32% from its March 23 low, in line with the traditional version that gives more weight to megacaps like as Microsoft and Apple.

Still, there is room for breadth to improve. Despite the rally, fewer than one fifth of stocks on the New York Stock Exchange managed to trade above their 200-day moving averages. That compared with a five-year average of about 50%.

Meanwhile, few investors are confident that the worst is over. More than 80% of money managers surveyed by Strategas Securities said they expected the next 10% move in stocks will be lower. In the latest poll by Bank of America, 68% of investors called the rebound in equities a bear-market rally, or a short-term and fast bounce before they fall to new lows.

Such mindset has fostered investor love for safety, with tech and growth stocks cited as the most crowded trade in the BofA survey. That may not be good news. According to Cornerstone Macro’s study, the S&P 500 has shown a tendency to post big declines when large-cap growth was favored. Over the past two months, such a preference for safety has accompanied five down days of 2% or more, compared with one when small-cap value outperformed.