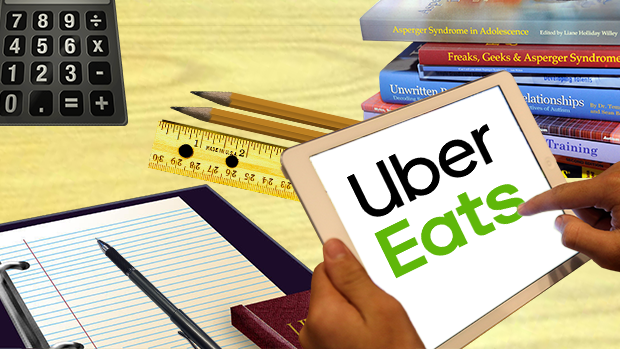 Move over superhero lunchboxes and Kool-Aid pouches, young students are now using food delivery apps like as Uber Eats and Skip the Dishes for their school lunches.

“People Uber Eats McDonald’s to my school all the time, at least a few times a week,” Jamie Bunga, a 16-year-old high school student, told BNN Bloomberg in an interview.

“It’s just easy and it’s there, you don’t have to leave school, and you just have to hit a button on your phone. Most people do it while they’re still in class.”

Food delivery apps are a diverse, fast-growing space in the gig economy with companies offering everything from grocery delivery services with Instacart, to a virtual convenience store with goPuff.

Skip the Dishes, a Canadian delivery network app, says that lunch orders are one of their most popular times, growing over 91 per cent year-over-year on their platform.

“Millennials and university students used to be our biggest demographic but we’ve really expanded to all ages,” said Howard Migdal, managing director of Skip the Dishes, Canada, in a phone interview.

While it's not surprising the first generation growing up with technology from a young age is adopting these food-delivery apps into everyday life, the added spending could become a problem for them – and their parents.

“It’s encouraging irresponsible spending and it really adds up with parents having to pay the bill in the end. Especially when some kids are doing it every day,” said Jamie’s mom, Pam Salley, who is a mother of three.

“It’s almost like a wave of Uber-ization that’s taking place with this generation. Kids are so used to getting anything whenever they want and parents are losing control over what their kids eat and what they spend.”

Although the rising popularity of food delivery apps among youth may create concerns with parents, some personal finance experts are pointing to this as a great opportunity for them to start teaching their kids healthy spending habits.

“This opens up a larger financial conversation here because kids need to realize how everything adds up. There’s a lack of appreciation and it’s taking something that’s supposed to be a treat and turning it into a normal occurrence,” Kelley Keehn, consumer advocate with FP Canada, said in a phone interview.

“You can’t cut these kinds of things out completely because that doesn’t teach them anything. They need to see the tangibility of it, that final price tag, and then think ‘What else could I do with all that money?’”

At the end of the day, Keehn said parents have to be proactive in teaching their kids how to manage these new apps.

“People are super busy and sometimes we resign ourselves to saying we don’t have the time for things like lunches, since our schedules get in the way,” she said.

“Do something simple like menu planning for the week ahead and maybe order in just once. Then you’re teaching your kids an important lesson. You can’t just cut these things out all together because that won’t teach them how to be financially responsible in the long run.”