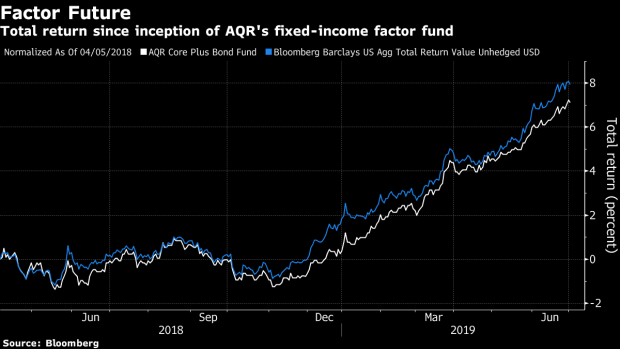 (Bloomberg) -- For all his years preaching to a world of finance where quant investing is a religion, Patrick Houweling inspired few believers. Suddenly, he’s got a flock.

Hedge funds, investment banks and sovereign wealth funds are racing to discover the next big thing in fixed income. In so doing, they’re heeding the counsel of the soft-spoken Robeco manager whose 2014 paper is a touchstone for quants channeling the boom in factor investing that’s taken over stocks.

“It used to be that we’d have to spend most of our time in meetings with prospective clients explaining what fixed-income factor investing is,” said Houweling, whose team oversees around 4 billion euros ($4.5 billion) in such strategies. “Now we don’t need to explain. People just want to know how they can use it.”

By carving up corporate bonds into behavioral traits such as value and momentum in the search for alpha, these math wizes are hoping to disrupt the established giants of the trillion-dollar credit market.

It also offers the prospect of redemption for quants riddled with outflows and existential angst as they underperform in the stock boom. A comedown for AQR Capital Management -- co-founder Cliff Asness has called recent performance “crappy” -- and peers has them scrambling for fresh ways to win over Wall Street.

Houweling at Robeco Institutional Asset Management BV is an unlikely figure to start a revolution, but the thoughts he set out in his 1998 masters thesis as a student of econometrics are taking hold in the real world. Until relatively recently he was one of a small handful shepherding a way to bet on fixed-income factors. Now he criss-crosses the world, extolling the virtues of the high-octane strategy to Australian pension funds and sovereign wealth fund managers in the Middle East and Asia.

Among recent moves in Europe, Northern Trust Asset Management is raising money for a fund based on credit factors, while a group of ex-BlueBay Asset Management executives are starting a London firm centered on the strategy.

Established players include AQR which launched a mutual fund in April 2018 using the same theoretical underpinning in their equity offerings. BlackRock Inc. and Invesco run passive products riding the investing style with more than $500 million in assets combined.

Unlike in stocks, where quant over-crowding may be exhausting the potential for alpha, it’s a nascent industry. On a recent marketing trip to Europe, Michael Hunstad, director of quantitative strategies at Chicago-based Northern Trust, likened the trajectory to the early days of equities.

“It’s an entirely different way of thinking about the world,” he said. “That’s where we were in the equity markets 10 years ago.”

So far, the performance of mainstream fixed-income factor funds hasn’t been electrifying, while the relentless risk rally makes vanilla carry strategies a winning style. But the promise is powerful.

Quants have long believed you can take advantage of behavioral biases by sorting shares according to their characteristics, called factors. Investors overlook boring stocks, for example, so buying companies posting muted volatility will allow you to outperform. There’s big money at stake. Beyond mutual and hedge funds, the factor theory also underpins smart-beta passive products with about $1 trillion in assets, mainly in stocks.

In credit, systematic traders sort corporate obligations into buckets called carry, value, momentum and size to analyze spreads relative to credit risk, leverage, the size of the issuer and ease of trading.

“These strategies are basically a hedge to the overweight cyclical carry strategy that many long-only credit funds use,” said Saul Doctor, a credit strategist at JPMorgan, which is among Wall Street firms proselytizing the newfangled trade in recent papers. “In the next back-up in spreads, their funds should outperform.”

The pitch looks timely. The supercycle is a decade old, and any reversal could hurt traditional investors who’ve largely outperformed by chasing yield.

According to AQR, traditional bond funds have generated alpha in the past two decades simply by virtue of taking bigger risks in speculative-grade companies that pay higher yields, or by putting money on the line for longer and longer.

Spinning bonds into algorithmic gold not only requires human talent, but a robust collection of prices and computing power. Unlike equity, where a company has one stock, there are countless bonds per firm where prices aren’t reported on transparent exchanges. Then you have to trade the things, which requires relationships with brokers, access to the right platforms and flexibility to navigate liquidity issues.

Breeze in a Hurricane

Working with data it first sourced from Lehman going back to the late 1980s, Netherlands-based Robeco built up a library of credit resources to construct automated strategies. For some skeptics, it’s barely enough.

“If it’s less than 30 years, I wouldn’t look at it for factors,” said Riccardo Rebonato, professor of finance at EDHEC Business School, EDHEC-Risk Institute, and a former global head of rates and FX analytics at Pimco. “Identifying a factor is like detecting the direction of a gentle breeze in the middle of a hurricane. You need a lot of observation to tell.”

Certain factors like momentum and value require lots of portfolio churn, a challenging proposition given the trading costs. Still, there are all manner of ways quants trade the credit cycle. AQR’s Core Plus Bond mutual fund with $108 million holds a mixture of government, corporate and mortgage bonds.

Andrew Dassori, co-founder of Wavelength Capital Management LLC, said his firm focuses on “whatever instruments are going to be most efficient.” Its Interest Rate Neutral Fund has a mix of Treasury futures and ETFs. With a 10% return this year, it’s beating 97% of peers.

As for Houweling at Robeco, he still encounters plenty of doubters, but they don’t bother him much.

“Some are outright critical, that this can never work,” he said. “These are people who don’t want to be convinced, so we’ll just talk to somebody else instead.”