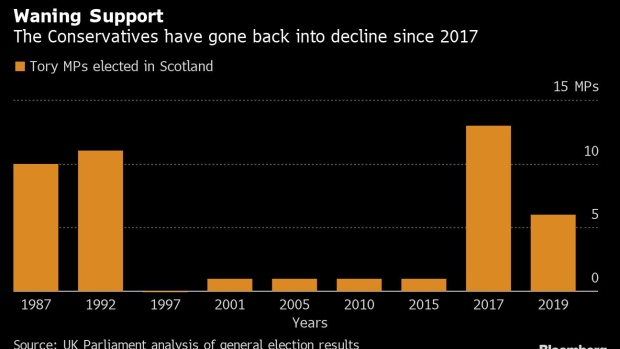 (Bloomberg) -- The cost of living crisis and perilous state of the economy will take a temporary backseat to a more existential challenge in the contest to become the UK’s next prime minister: How to keep the country together.

Liz Truss and Rishi Sunak went to Scotland on Tuesday to pitch themselves to the Scottish Conservatives at a time when tension between the governments in Edinburgh and London has escalated over Scottish First Minister Nicola Sturgeon’s demand for another independence referendum.

Several hundred Scots campaigning for a second vote gathered outside the event late Tuesday -- the biggest protest so far in the leadership campaign. Scottish Secretary Alister Jack was booed walking in and some Tory party members were hit with eggs.

The party faithful heard how both candidates plan to champion the unity of the UK and head off support for her nationalists. Like outgoing Prime Minister Boris Johnson, Truss and Sunak will refuse to grant permission for a referendum, an issue that Sturgeon and her Scottish National Party are pursuing in the courts.

Truss focused the beginning of her speech entirely on the union, vowing to “never ever let our family be split up,” while Sunak promised to take on Sturgeon and beat the SNP.

In addition to the UK’s constitutional future, looming large is the Conservatives’ ability to reverse their renewed decline in Scotland. That could prove crucial for the party at the next election if it continues to lose support elsewhere in the UK. Mishandling the next two years risks providing another boost to the nationalists.

“The big thing for Scottish Tory members is the union,” said Alan Convery, senior lecturer in politics at the University of Edinburgh. “What is helpful for Scottish Conservatives, and what energizes Tory support, is the anti-independence stuff.”

Front-runner Truss has already set the tone, calling Sturgeon an “attention seeker” who’s best to “ignore.” Sturgeon hit back, accusing Truss of vanity, saying that when they met briefly last year, the UK Foreign Secretary “just wanted to know how she could get into Vogue.”

That may play well with their support bases, but it doesn’t bode well for their future relationship. Should she become premier, Truss will clash with a Scottish leader who has vowed to turn the next UK parliamentary election in Scotland into a de facto independence vote should her demand for a legal referendum continue to be rejected.

Complicating matters for the Tories is that the unionist vote in Scotland is split between them, Labour and the Liberal Democrats, while the pro-independence vote is largely concentrated with the SNP.

Ahead of the party gathering in the city of Perth, Truss promised to foster investment in Scotland and boost whisky exports via a trade deal with India. She also plans to give the Scottish Parliament more power to “hold the devolved administration to account.”

For his part, former Chancellor of the Exchequer Sunak has said he also will challenge Sturgeon over such things as health and education, which the Scottish government oversees, while ensuring public services are “better joined up.” Both candidates promised they would protect the UK’s integrity.

Scotland voted to remain in the UK by 55% to 45% in a 2014 independence referendum, but voted against leaving the European Union less than two years later, bucking the national trend. That result, Sturgeon said, means Scots should have the right to again make a choice about the future of the three-centuries-old union with England and Wales. Polls show Scotland is roughly split down the middle on whether to break away.

“The Scottish government is committed to running a campaign in favor of independence,” said John Curtice, professor of politics at the University of Strathclyde and Britain’s most prominent electoral analyst. “It’s not an inevitability, but it’s difficult to see how we would avoid a referendum.”

The Conservatives had been relegated to also-rans in Scotland at the ballot box, famously losing all their Westminster seats in the country in 1997 as the Labour Party won a landslide. But a slow revival saw them claw back support in recent years. As the SNP ate up Labour votes, the Tories become the official opposition to the SNP in the Scottish Parliament.

In 2017, the election of 13 Scottish Tory MPs was integral to Prime Minister Theresa May’s narrow victory. At the 2019 election that saw Johnson win a thumping UK-wide majority, Conservative seats in Scotland dropped to six.

As the candidates tour the UK, vying for support among the estimated 175,000 Conservative Party members whose votes will determine the next premier, it remains unclear as to whether Scottish Tories are leaning towards Truss or Sunak. There’s been no isolated polling in Scotland.

Sunak has secured the backing of 10 Conservative members of the Scottish or UK parliaments. One of them, Andrew Bowie, who was elected in 2017, says the party in Scotland is looking at who is best-placed to stop Sturgeon.

“Ultimately up here the big question is Scotland maintaining its place as part of the UK,” he said. “If Scotland votes to leave the UK, it wouldn’t just be Scotland voting to leave, it would be the end of the UK as we know it as a political entity, so it is vitally important to the future.”

What has been made clear — including by Scottish Conservative leader Douglas Ross — is the opposition to Johnson. Indeed, the challenge for the next UK leader doesn’t just rest on eating into Sturgeon’s popularity, but also moving on from Johnson’s legacy. He was “deeply unpopular” in Scotland, in part because his constant rhetoric about Brexit served to remind the Scottish people that they had voted differently, said Convery.

Ruth Davidson, who had led the party’s revival, resigned shortly after Johnson was elected. Ross, her successor, has also proved to be a thorn in Johnson’s side, having repeatedly called him to resign over the scandals involving parties at Downing Street during the Covid-19 lockdowns.

A poll by Ipsos MORI in May found that 83% of respondents in Scotland were dissatisfied with Johnson’s performance. The key for his replacement, who is set to take office on Sept. 6, is to establish a period of calm, according to Rachel Ormston, a research director at the polling company, and Convery at Edinburgh University.

“It’s hard to see how either of them could be less popular than Johnson, but that said they will be looking for someone that doesn’t cause a stir, which Truss perhaps does,” said Ormston.

Since Brexit, the UK government has talked up investment in Scotland, including the relocation of civil service jobs to a new headquarters in the country. Ross and his Scottish Conservatives have attacked Sturgeon for being focused on independence rather than tackling issues such as record deaths from drug abuse, health service waiting times and education.

For Bowie, the next UK leader has to work constructively with the Scottish government to deliver for the Scottish people, he said. Refusing to engage with Sturgeon might not be the best way. Sunak said ignoring her and the SNP would be “dangerously complacent.”