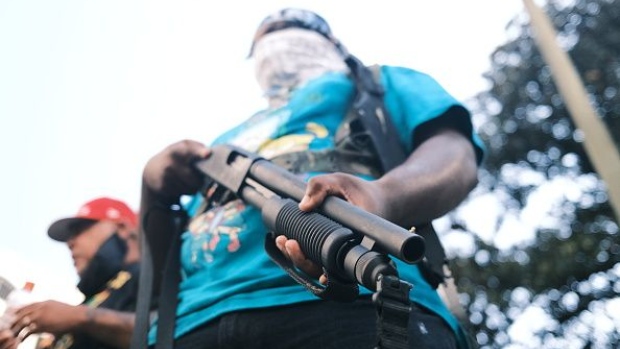 (Bloomberg Opinion) -- New York Attorney General Letitia James today provided evidence of what others had already claimed: that the National Rifle Association is a cornucopia of corruption. In her news conference, James used language familiar to students of swindles and scams. “Fraud.” “Misconduct.” “Illegal.” “Excessive.” “Improper.” It’s a vocabulary routinely applied to Trumpism; indeed, it was previously deployed by this same attorney general when she shut down Donald Trump’s personal foundation.

James portrayed the NRA as a sloppy grift for extracting money from donors and depositing it in the pockets of NRA executives such as Wayne LaPierre, whose seven-figure salary was supplemented by lavish shopping sprees in Beverly Hills and luxury vacations — all paid for by the MAGA-capped suckers who supply annual dues to the NRA.

As Bloomberg News reported, “the state investigation uncovered an array of wrongdoing, including the awarding of lucrative deals to family members and close associates and the awarding of ‘no show’ contracts to former employees to ‘buy their silence and continued loyalty.’” Insert your own Drain the Swamp joke here.

The NRA could now join the Trump Foundation circling the drain. “If the courts find that the NRA violated New York nonprofit law,” writes UCLA law professor Adam Winkler, “the Charities Bureau could obtain damages, as well as the removal of LaPierre and other directors and officers of the organization.”

The NRA is already bleeding money due to mismanagement and legal fees, including a bitter dispute with its former advertising firm, which produced many of the most sensational allegations of financial abuse. But even if the NRA makes it through the legal gauntlet, it will be diminished.

That appears true for the extreme gun movement as a whole. Gun sales have been thriving in the pandemic, due to the intimate relations between fear and firearms. But images of armed white vigilantes menacing Black Lives Matter protesters are not boosting Republicans, the party of guns for all, in suburban battlegrounds. And Trump’s campaign of American carnage is in trouble.

With a pliant president in the White House and a conservative Supreme Court, the gun movement pressed its advantage during the Trump presidency. But it has been unable to solidify the gains of the “guns everywhere” era that accompanied the Supreme Court’s 2008 Heller decision establishing an individual right to bear arms.

The court hasn’t decided a major gun-rights case since 2010, when it said the Second Amendment applies to states and cities. Meanwhile, it keeps rejecting opportunities to expand or clarify gun rights. In June, the court turned away 10 different gun cases, declining to resolve unsettled law about the scope of the Second Amendment.

Nationally, momentum is on the side of regulation. The court’s refusal to act has enabled blue states, including California and New York, to adopt aggressive new regulations on guns and even ammunition. Moms Demand Action for Gun Sense in America is a grassroots juggernaut, pushing through red-flag laws even in red states. The kids who survived the mass shooting at their school in Parkland, Florida, didn’t grow up and go away; they’re still fighting for sane gun laws. Everytown for Gun Safety, which, like Moms Demand, is funded by Bloomberg LP founder Michael Bloomberg, has eclipsed the NRA as the most powerful force in political campaigns with a focus on gun issues.

New funding for gun-violence research increases the likelihood that researchers will be able to make more definitive pronouncements about the efficacy of “guns everywhere for everybody” in the cause of public safety. Perhaps more data will redeem guns in bars and churches and day-care centers. But given how vehemently the gun movement has resisted research, some people obviously believe research is not their friend. Meanwhile, a switch of a single Supreme Court seat could potentially endanger the entire gun-movement project.

I’m probably worse than the average columnist at predictions. But in 2016 I wrote that the NRA had peaked. My reasoning wasn’t complicated. Basically, the NRA, even in its moment of camo-clad Trumpist glory, was running up against the limits of extremism. Now it appears to have hit the limits of corruption, as well.

There may be a lesson here for the entire Trumpist reaction.