Even in a year that has seen widespread selling of technology stocks and long-time market leaders fall into bear territory, the woes of Netflix Inc. stand alone.

The video-streaming company has plummeted 69 per cent this year, abandoned by both investors and analysts as back-to-back disappointing quarterly reports raised concerns about user trends in an industry that’s becoming more competitive and losing its pandemic-related tailwinds. The drop is the most of any Nasdaq 100 or S&P 500 component, and much worse than the former index’s 26 per cent decline.

Shares of Netflix gained 0.6 per cent in early trading on Tuesday.

The growth outlook has weakened to the point that Netflix has cut hundreds of jobs and changed its tune on two longstanding principles: it is cracking down on password sharing, and will introduce an ad-based subscriber tier to the platform. That’s on top of a backdrop where high inflation has pushed the Federal Reserve to hike rates sharply, sparking recession fuels and fueling a rotation out of tech.

The scale of the challenges suggest it will be tough for Netflix to regain a valuation that exceeded that of Walt Disney Co.’s as recently as December. Now, “The Lion King” parent is worth more than twice the home of “Tiger King.” 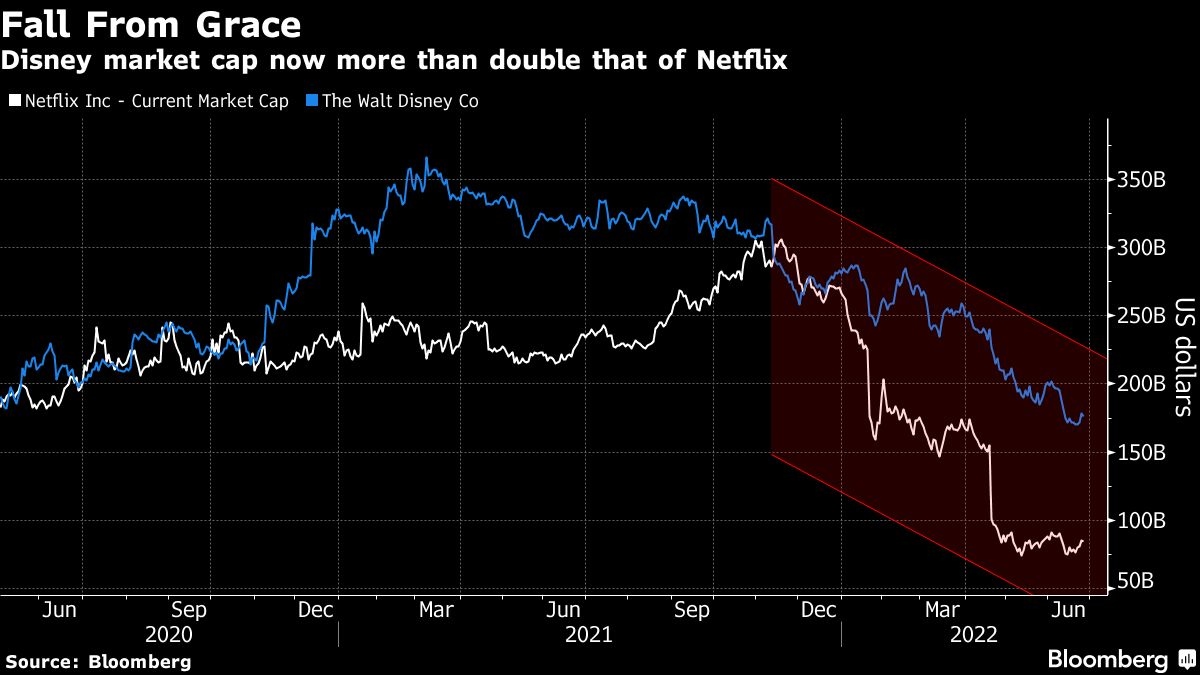 “We’ve seen a lot more competition, and the cost for Netflix to continue competing has gone up, which hurts the expectation that earnings were going to grow at aggressive rates for a long time,” said Jeremiah Buckley, who oversees nearly US$48 billion as a portfolio manager at Janus Henderson Investors.

Estimates for Netflix are moving in the wrong direction. The consensus for this year’s revenue now stands at US$32.4 billion, which although representing year-on-year growth of 9.2 per cent, is down from the US$34.1 billion that was expected at the beginning of the year, according to data compiled by Bloomberg. The consensus for adjusted earnings has declined about 16 per cent over the same period.

The weakening growth outlook has led Wall Street to turn sour. At the start of the year, more than 70 per cent of analysts had Netflix as a buy. Now, just about 30 per cent do, with Goldman Sachs Group Inc. and Benchmark Co. among the firms downgrading their opinions this month. The consensus rating -- a proxy for the ratio of buy, hold, and sell recommendations -- is at 3.35 out of 5, the lowest since 2014.

Yet the stock is getting ever cheaper. Netflix now trades at around 16 times estimated earnings, near the lowest since 2008, and a fraction of a 10-year average exceeding 80. Its drop this year has been steep enough that the shares have joined the Russell 1000 Value Index following a re-balancing. 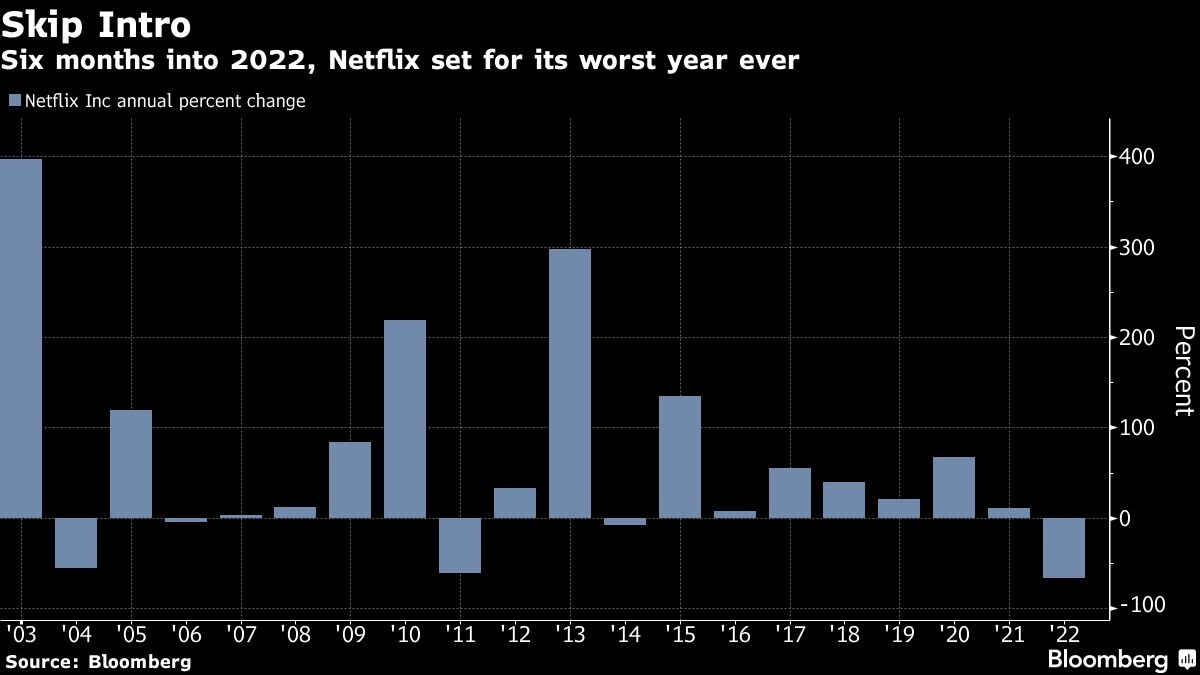 David Katz, chief investment officer at Matrix Asset Advisors, said investors “can at least make a case for Netflix” at current levels, although he remains skeptical about its prospects, given the competitive backdrop.

“That’s why we’re not prepared to buy Netflix yet, even though that’s also considered a value name now,” Katz said. “It is statistically cheap, but we have more questions than answers.” 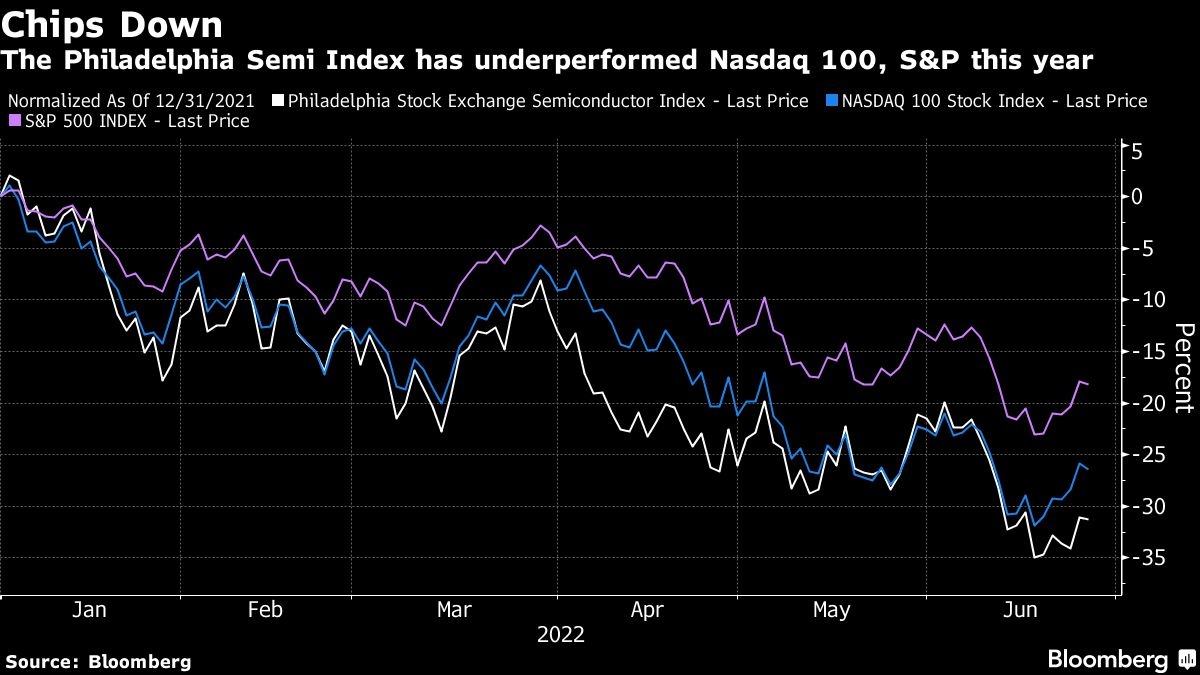 The Philadelphia Stock Exchange Semiconductor Index has fallen 31 per cent this year, with every component down at least 14 per cent. Some of the worst-performing stocks in the gauge include Marvell Technology Inc., Nvidia Inc. and Advanced Micro Devices Inc. While demand has remained strong for chipmakers, the industry has been plagued by constant supply constraints.