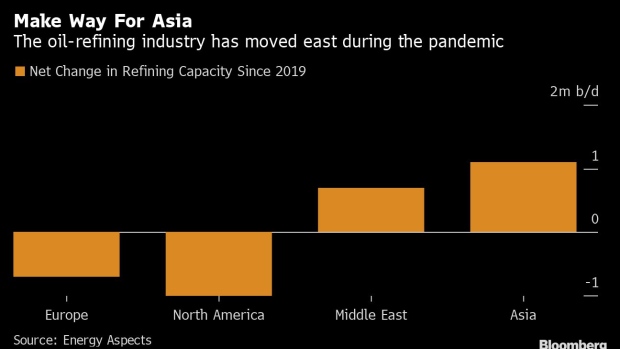 Gasoline drips out of a fuel nozzle at a gas station in San Francisco, California, U.S., on Wednesday, April 27, 2022. California is set for an automatic increase in its fuel tax July 1 after Governors Gavin Newsom failed to convince lawmakers to pause the hike, part of his plan to bring relief to residents in the state with the most expensive gasoline. Photographer: David Paul Morris/Bloomberg , Bloomberg

(Bloomberg) -- The oil market has a problem with its ability to make enough fuels for the world.

Saudi Arabia’s energy minister said earlier this month that there’s a bottleneck in the global system for refining crude, and that’s why fuel prices are breaking records.

In short, Prince Abdulaziz bin Salman said there’s just not enough capacity globally to make products like gasoline and diesel following the closure of refineries. The US is even asking the industry if it can bring idled plants back into service to ease the pressure.

Here’s a look at the numbers and causes behind that refining squeeze, and its consequences.

Some of the refining squeeze, and a big part of the oil price rally, may down to the actions of OPEC+.

Kristine Petrosyan, an oil analyst at the International Energy Agency, says that the increase in oil prices from the second quarter of 2020 -- due to OPEC+ production cuts following a demand slump -- contributed to a period of particularly low margins for refineries in 2020 and 2021.

That, in turn, contributed to refinery capacity shutdowns and steep oil-product inventory declines, she said.

“These, combined with continued demand recovery, are causing the surge in product prices that we observe today,” she said.

The shortfall of capacity globally is not enormous.

The IEA estimates that refinery processing rates this year will be about 1.3 million barrels a day below where they were in 2019, while oil demand will be 1.1 million a day down.

Other things being equal, that’s positive for fuel prices and refinery margins.

Critically, the war also coincided with seasonal refinery maintenance in the second quarter that reduced fuels production just when companies in the west also stopped taking supply from Russia -- a key global exporter.

Global refinery throughput is forecast to rise toward the end of the year.

Prince Abdulaziz also pointed out that the big reductions have been in the US and Europe. Meanwhile, expansions have taken place in Asia and the Middle East.

Right now, that’s important for Europe and the US because those regions are taking far less oil from Russia. That includes both crude and secondary feedstocks to make fuels.

The Biden administration is inquiring about restarting shuttered refineries, as the White House tries to address record gasoline prices that are setting off political alarm bells ahead of the midterm elections.

All this has contributed to fuel-price surges -- as has Russia’s invasion of Ukraine and the threat to supply that it’s caused.

Diesel and gasoline prices are now far above crude oil, creating an enormous incentive for refineries, especially in Europe, to go flat out to find light, low-sulfur crude that’s easy to process into those fuels.

That’s probably not optimal for refineries, many of which get built with specific types of crude in mind -- and switching them is not always easy.

The loss of Russian supply coincided with a sharp drop in shipments from China into early 2022, part of a strategy of progressively limiting overseas sales.

The drop in Chinese exports has exacerbated the tightness in the market at a time when refineries elsewhere were in maintenance, according to George Dix, an analyst at Energy Aspects Ltd.