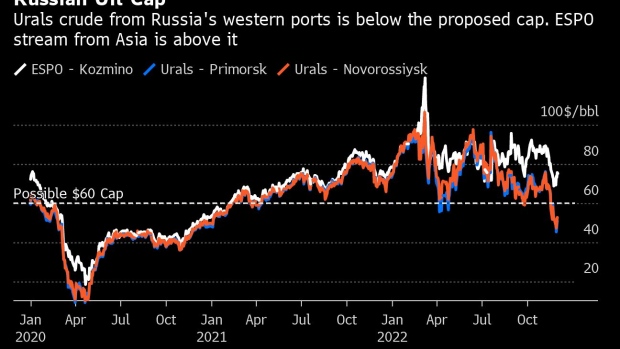 (Bloomberg) -- The Group of Seven is set to impose a price cap on Russian oil that’s well above where it now trades. If there was ever any doubt what the premise of the cap was, it’s now clear: the US and its allies want Russia’s crude to keep flowing.

European Union ambassadors backed limiting the price of Russian oil, a key source of income for President Vladimir Putin’s war machine, at $60 a barrel after fraught talks that dragged into the night more than once. Crucially, that’s above the $50 that Russia’s flagship Urals grade already trades at, according to data from Argus Media.

“The key point in our view is the signal that the G-7 seeks to keep Russian oil on the market,” said Joel Hancock, an analyst at Natixis. “The market has shifted to a view that Russian crude oil exports will remain more resilient than previously expected and largely unaffected by the price cap.”

Now, Moscow’s reaction will be key. Russia has opposed the measure, and threatened to stop production in response. But on Thursday Russian Foreign Minister Sergei Lavrov said the cap was irrelevant, the strongest hint yet of a possible softening. With such a generous cap, buyers and sellers can easily claim it’s just business as usual.

“We don’t care what the price cap will be. We’ll negotiate with our partners directly,” Lavrov said. “And partners who continue working with us won’t look at those caps.”

The G-7 has mostly decided to stop its own imports of Russian crude so the move is aimed squarely at other big buyers such as China, India and Turkey. Those countries have not signed up, but the US hopes they will use the threshold as a bargaining chip. Crucially, if they don’t buy below the threshold, they won’t be able to access European insurance and shipping.

The plan, driven by the G-7, comes at a time when Europe is fighting high inflation and at risk of a recession. Companies and households are reeling from exorbitant energy bills triggered by Russia’s invasion of Ukraine, and the OPEC+ alliance is keeping a tight rein on supply. As governments spend billions to stave off a backlash from voters, increased economic risks are now being taken into account in political decision-making.

“The price cap will encourage the flow of discounted Russian oil onto global markets and is designed to help protect consumers and businesses from global supply disruptions,” US Treasury Secretary Janet Yellen said in a statement Friday, after the G-7 announced its endorsement of the $60 level. She added that even if countries buy outside the cap coalition, it will “enable them to bargain for steeper discounts on Russian oil and benefit from greater stability in global energy markets.”

The EU sanctions agreed earlier this year had initially shocked many in the market for being so strict. The idea was to ban companies from providing insurance to transport Russian oil anywhere in the world. It would have meant even Chinese and Indian customers would have had to find their own insurance from Dec. 5.

The US argued that the sanctions risked provoking a spike in oil prices that would have been ruinous for the world economy, and also potentially end up even benefiting Putin. The price cap was a kind of off-ramp -- those services would be available but only for oil sold under the designated level. The idea was to limit revenues but keep the oil flowing to the global economy.

“We think the number at $60 a barrel is appropriate” to balance limiting Moscow’s ability to profit and ensuring supply meets demand, John Kirby, spokesman for the US National Security Council, said Friday, adding that the cap can be adjusted going forward.

Some in Europe saw the US plan as a way to water down sanctions, and Poland led a group of countries pushing for the cap to be closer to production costs. Shipping nations wanted a more generous level, and the discussions were often fraught as countries’ interests didn’t always align.

For its part, Ukraine said the level should be set as low as $30.

“Given that Urals is currently traded far below the level of the cap, in principle it could be a good deal,” said Jorge Leon at Rystad Energy.

A complicating factor is that oil is priced very differently in Asia. There, the key ESPO grade is trading at over $70 a barrel. It’s not clear if all that crude will end up under the cap or not.

When the price cap was first floated as an idea, many thought it unworkable without key buyers such as India and Turkey on board, or extraterritorial penalties to deter breaches and incentivize adoption.

Now it looks like the US can claim some kind of victory if Russia does sell under the ceiling. Washington also argues that if Russian oil is already trading at a deep discount, the threat of the price cap can take some of the credit. For its part, Poland, after long negotiations, has secured some extra conditions, including a review mechanism going into next year.

Still, there remain questions over enforcement, as the EU has watered down its rules, and there are no secondary sanctions to add teeth. A spat over insurance in Turkey could still pose problems. And the Kremlin’s reaction remains a big unknown.