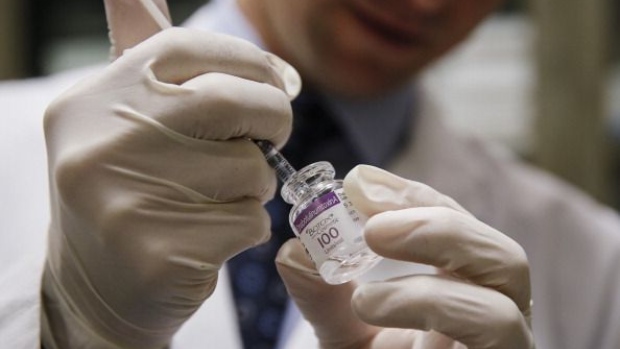 Dr. Keith A. Marcus draws Allergan Inc. Botox into a syringe before administering it to a patient at the offices of Marcus Facial Plastic Surgery in Redondo Beach, California, U.S., on Tuesday, April 22, 2014. Valeant Pharmaceuticals International Inc. offered to buy Allergan Inc., maker of the Botox wrinkle treatment, in a cash-and-stock deal valued at $45.7 billion in the latest step of the Canadian company's plan to become one of the world's largest drugmakers. , Photographer: Bloomberg/Bloomberg

Jocelyn is a 25-year actress in New York. A self-described “petite woman” who’s happy with her body overall, she’d always noticed a few areas that neither diet nor exercise could fix.

Then the pandemic struck, and New York went into lockdown. “I got a little chunky from eating so much, sitting on the couch, and watching Netflix,” says Jocelyn,  who asked us not to use her real name for professional reasons.

Like much of the city, she spent almost three months with life on hold, and afterward found herself not only heavier but flush with cash as the restrictions eased. “I wasn’t able to spend as much money as I would have normally, on eating out or shopping excessively,” she says.

As a result of her unhealthy weight and healthier bank balance, Jocelyn splurged on cosmetic surgery as soon as she was able; in her case, it was an AirSculpt treatment, a body-contouring alternative to liposuction. “I got it done on a Wednesday, filmed a commercial that same Friday, and right after, went on a date, because I looked freaking amazing and I darn sure wasn’t going to be the only person to see it,” she says.

As lockdowns took hold over much of America earlier this year, non-essential services were among the first to shutter—among them, cosmetic surgeons and dermatologists. By mid-March, in such hubs as New York and Los Angeles, procedures from Botox to butt lifts were on hiatus. Three months later, though, those clinics were slowly receiving authorization to reopen, as well as a deluge of enquiries from pent-up patients keen to go under the scalpel as soon as possible.

Dr. Aaron Rollins runs a network of clinics for Jocelyn’s procedure across the U.S. The first to reopen were sites in Atlanta and Texas at the end of April, with the final location, in New York, operating again from June 8.

Rollins says overall demand at his practices was 20 per cent higher in July vs. the same month last year. Rollins has even hired extra administrative staffers to help handle the volume of applications for consultations. “We’re booked for months, and it didn’t peak right when the quarantine stopped; it keeps building up,” he marvels, “July was the busiest month in the history of the company, and that’s the last nine years.”

Dr. Tracy Pfeifer, a surgeon who splits her time between Manhattan and Long Island, N.Y., has seen a particular uptick in breast reductions, especially among younger women. She estimates that her bookings for the operation are 25 per cent higher than they were a year ago.

Such a surge in surgery might seem startling, given the country’s overall economic health as the pandemic continues, with the sharpest contraction in gross domestic product in modern history and a joblessness rate that hovers above 10 per cent. For many high-end surgeons, though, the rest of 2020 looks set to be a blockbuster period for nips and tucks.

Surgeons say several factors have come together to drive the surge. Jocelyn wasn’t alone in gaining what’s been dubbed the “quarantine 15” during lockdown, with gyms closed and Americans eating to comfort themselves. “Everybody is fat, and no one wants to be,” Rollins shrugs, “and it’s the perfect time not to be fat.”

The Zoom of Doom

He also tells the story of a newlywed who lives in the U.S. whose bride was stuck in the U.K. when borders locked down. The couple has relied on video calls every night. “The guy told me, ‘Oh my God, I thought I had a little bit of a double chin, but it’s all I think about.’ So he came to us,” Rollins explains. “The double-chin business has skyrocketed, because any chins you have look 10 times worse on an iPhone.”

Dr. Lara Devgan is a plastic and reconstructive surgeon on New York’s Upper East Side. She has seen a similar uptick in bookings, much of her boom Zoom-related. “There’s something inherently unflattering about a 30-degree, angled-upward, forward-facing camera on a laptop,” Devgan explains. “I had one patient, who was previously just happy with Botox and fillers, proceed with a face and neck lift as a result of being on endless streams of Zoom calls. She saw jowls and neck folds she’d never appreciated before quarantine.”

Devgan has increased her surgical dates by a third and is now booking procedures for the holiday season. Patient, she says, are focused on quality rather than price and are keen to avoid surgical complications and risk admission to a hospital, where they might be exposed to COVID-19.

The ability to recover in private has been the most common explanation for patients turning to procedures at AVA MD, a California clinic with  locations in Beverly Hills and Santa Monica. One of the nurse practitioners there is KarriAnn Khalil, who focuses on such non-surgical procedures as Fraxel laser resurfacing and the Plasma Pen. Khalil says the Plasma Pen has become particularly popular of late. The procedure, often used to erase smoker’s lines around the mouth by creating controlled injuries, results in scabbing that last for 10 days or so. Amid widespread mask-wearing, the scabs need never be seen.

Khalil’s recent patients have included a female chief executive officer, whose lip-plumping can be camouflaged much the same way, and what she calls an “A-list, onscreen celebrity” who had laser treatments, including laser resurfacing, across her face, neck, chest, shoulders, arms, and back. “Studios had to shut down and filming was halted, so we finally had the time to do that without fear of the paparazzi or seeing it on camera.”

Saving Up for Surgery

Not every pandemic-era plastic surgery patient is a putative Oscar winner. Kelly (again, not her real name) is a 42-year-old receptionist from Rockland County, N.Y., who asked to go by a pseudonym in the wake of her divorce. She underwent multiple procedures as soon as clinics opened, including a tummy tuck, skin removal, liposuction, and breast augmentation.

“I did save during the pandemic, because there was no place to go—but mostly, collecting unemployment and the stimulus check is what helped me afford the procedures,” she tells Bloomberg Pursuits, “I had lost 150 pounds, and no amount of exercise would get rid of all my extra skin.” Those surgeries were performed by Dr. Steve Fallek, who has two Beauty Fix Med Spa locations in New York City and intends soon to open one in Westchester, N.Y., to cater to his newly expanded client base near their homes.

Fallek has seen several new patients who were ready to use the reopening after lockdown to reboot their lives. He says he’s even noticed an uptick in bookings from fellow medical professionals, often those on the front lines of the pandemic, who wish to get a nip and tuck tonic. “I had one lab professional who’d been doing COVID testing in one of the New York hospitals, and it was a little wearing, so she needed a boost—something to make herself feel better.”