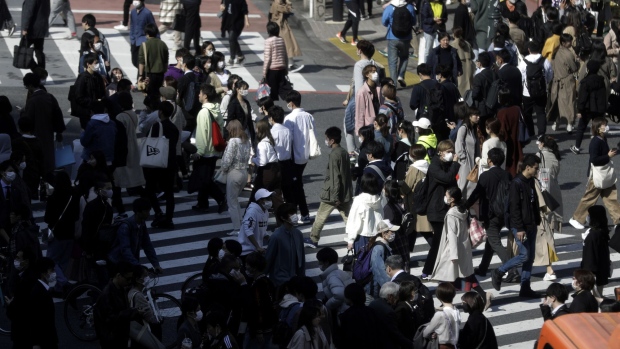 Employees wear protective masks in a conference room at a JLL office in Dallas, Texas, U.S., on Wednesday, Sept. 9, 2020. Constraints such as social distancing and masks mean the precise nature of the future office working environment remains an open question even as some signs of normality return with some workers returning to their desks. Photographer: Dylan Hollingsworth/Bloomberg , Bloomberg

(Bloomberg Markets) -- The coronavirus pandemic has shown that policymakers will sacrifice business activity if it’s necessary for public safety. Climate activists have warned for years that society’s quest for growth threatens our planet, and some economists encourage using different metrics to judge an economy’s success. So we asked an array of economic policy experts whether anything has really changed.

This pandemic forces us to rethink economic growth and, in many respects, the way our economies and societies function. Artificial intelligence and major structural changes have to be taken into account, including working from home and relocalization of activities. Sustainability, mobility, resilience, fairness, and inclusiveness are key policy aims with enormous challenges in the years to come.

But the logic of economic growth cannot simply be dismissed. Debts, public and private, have continued to grow in the past decade. The financial crisis has not reduced the propensity to borrow around the world. The pandemic has forced governments to increase their budget deficits and, consequently, public debts. I would add that the stock of debt will not be less of an obsession. The new context for monetary policy, due to substantially lower natural rates, should not make us complacent about the size of debts. Countries need to manage their debts over the long run. Moreover, markets discriminate among economies. And one cannot take low inflation as a given forever. Especially if monetizing debts will be resorted to, increasingly.

No. If anything, the pandemic will likely intensify our obsession with growth. President Trump definitely wants the economy to rip. [Democratic presidential candidate] Biden’s “Build Back Better” agenda maps out an ambitious spending program that’s explicitly aimed at restoring economic growth. Governments the world over have borrowed and spent trillions in an effort to shore up their ailing economies. Already, many are worried about a debt overhang, and they’re counting on faster GDP growth to help reduce debt ratios in the years ahead. In the short term, policymakers want the labor market to recover, and faster GDP growth is seen as the essential pathway to restoring tens of millions of jobs. Until we embrace an alternative economic paradigm—or perhaps an alternative system—growth will remain an obsession.

I don’t think it’s going to end our obsession with employment. That’s a problem now and in all of our economies a year, two years, three years from now. We’re going to have excess unemployment. Bringing that down will be a major objective that public policy is going to struggle with for years to come. And giving people cash has to some degree helped solve this problem, at least in the short term.

Good economists have always recognized that GDP was not an adequate measure of well-being and that our objective should not be to increase GDP, but societal well-being. U.S. per capita GDP was among the highest in the world, but our living standards aren’t—as reflected, for instance, in life expectancy. The pandemic has gone after those with poor health, and with our nation’s greater health inequalities and poorer average health conditions than in other advanced countries, it’s no surprise that we’ve been so badly afflicted. The pandemic has exposed other fissures in our society: a lack of trust and social solidarity, a lack of competence in the ability of the federal government to respond, a lack of resilience in the private sector.

High prices in the stock market are an even worse indicator of societal well-being. Focusing on the wrong things can lead to taking the wrong actions. There are better gauges of how well we are doing, including assessing how the fruits of our progress are shared and the extent to which our gains are sustainable.

Creating these metrics was the objective of the international Commission on the Measurement of Economic Performance and Social Progress, which I chaired—an initiative whose work has been carried on by the OECD [Organization for Economic Cooperation and Development], implemented through its Better Life Initiative.

A lot depends on the arrival of an effective vaccine. If medical solutions turn out to be elusive, people will be forced to concentrate their efforts on survival, not growth.

Even if a medical solution is found, the present pandemic is likely to have left a lasting impression on households and businesses that having sufficient savings for a rainy day is important. This means some resources will be redirected from pro-growth activities to insuring against both natural and man-made disasters in the future. Such diversion of resources is likely to slow down growth of both businesses and the economy. Such a trend is likely to continue until the present shock is forgotten or when households and businesses feel they have enough resources set aside to weather the next pandemic.

Even with the coronavirus pandemic, we have not ended our obsession with economic growth as the sole North Star of economic health. In the midst of a deadly pandemic, we still heard the false dichotomy positing a trade-off between our public health and our presumed economic viability. Health and mortality have to be paramount indicators of economic well-being, otherwise, what is the point? Fortunately, we did make the moral decision back in March to hibernate our economy to save lives. But unfortunately, with inadequate federal guidance and federal resources to assist depleted state budgets, many states prematurely ended shelter-in-place orders, and now we have an excess of 200,000 deaths and a pandemic that still is not under control.

GDP has several inadequacies. It doesn’t reflect the inequality of a society. In countries that have volatile currencies, it’s hard to calculate the deflator and get a true sense of the real GDP. There’s a need to emphasize the best measures of living standards and rising human well-being. It certainly isn’t nominal GDP growth, we know that. Even real GDP growth doesn’t really capture what’s happening to the people in a country.

Over the years, I’ve wanted us to look at median income as opposed to the average. In fact, you need to look at the real median income: median income relative to the cost structure in a country. Japan in some years has had negative CPI [consumer price index]. Then 0% nominal growth would allow a positive real income change.

The pandemic doesn’t change our aspiration of having people’s living standards go up. I think a relevant measure of that is real median income. Given the complexity of doing that in local currency terms, I think you could think of it in terms of real median income in dollar terms for countries or in euro terms, for example.

If anything, the pandemic requires us to focus even more on economic growth, albeit using this as shorthand for a broader vision of what improves societal well-being. The pandemic has already contributed to a collapse in business investment, labor market scarring, deglobalization, and a step down in productivity growth. A turnaround in these forces is crucial to support vibrant, long-term growth prospects that increase living standards with social equity, that support an effective climate response, and that enable a sustainable sovereign debt trajectory. Without vibrant growth, these objectives are deeply challenged.

In my view, the answer to this is a clear no. However, I do hope it ends the belief that economic growth is our only tool for addressing disparities in our economy.

The pandemic has laid bare the persistent gaps in wealth, earnings, and overall economic security in our economy, particularly those disparities by race. Many will argue that the way to address these problems is through continued growth. I, however, would caution that there are limits to what growth alone can achieve.

There is also mounting evidence that racial disparities in wealth are the result of exclusionary policies deliberately designed to limit opportunities for certain communities. Racially restrictive covenants, for example, limited housing wealth accumulation among Black homeowners.

Even now the wealth gap by race grows wider at higher education levels. Human capital building is strongly related to growth, but at least in the U.S., it may actually widen disparities.

The serious problems the pandemic has highlighted were not all created by limited growth, and growth alone is unlikely to solve them. As we consider what we want our post-pandemic world to look like, it’s a good time to acknowledge these limits.

With Francine Lacqua in London and Andra Timu in Buchares