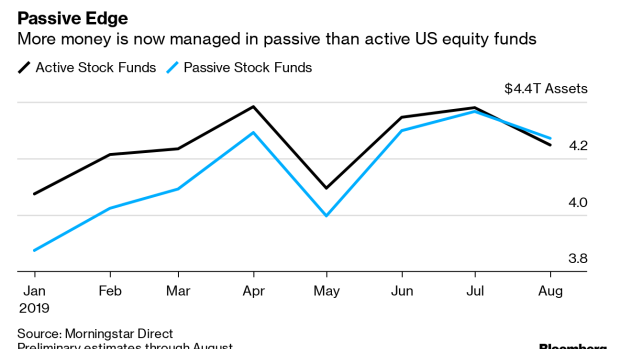 (Bloomberg Opinion) -- The U.K. Local Government Pension Scheme (LGPS) is the nation’s biggest steward of public sector retirement savings by membership, responsible for the nest eggs almost 6 million members worth 275 billion pounds ($342 billion). So the revelation that it’s under pressure from the government to shift more of its money into passive products should be a wake-up call to a stock-picking industry still reeling from the Neil Woodford debacle.

Jeff Houston, secretary to the pension plan’s advisory board, told the Financial Times that “there are elements within government that want the LGPS to be passive” in the wake of Woodford’s move to freeze his fund earlier this year. About 60% of the scheme’s assets are currently with active managers.

Now, no-one should be in favor of government meddling in the investment preferences of an independent body. (As a thought experiment, imagine how odious it would be if the executive suggested that LGPS should switch funds into U.K. gilts and away from equities, effectively pressing it to lend to the government by buying its debt.) And Houston didn’t identify who in government was questioning the LGPS’s strategy.

But the disclosure reflects conversations that are taking place at pension providers, charities and other custodians of other people’s money across Europe. And while the region has been slower than the U.S. to embrace the shift toward lower-cost index trackers, the global trend away from active managers is clearly accelerating.

In the U.S., the revolution has already been televised. Last month, the amount allocated to passively-managed U.S. equities outstripped those in active strategies for the first time ever, according to figures compiled by Morningstar Inc. Index-tracking U.S. equity funds climbed to $4.271 trillion in August, beating the $4.246 overseen by active managers, my Bloomberg News colleague John Gittelsohn reported last week.

U.S. investors have been quicker than their European peers to embrace exchange-traded funds, which is the main product allowing savers access to low-cost products that track benchmark indexes. The U.S. market is worth almost $3.9 trillion, compared with just $890 billion in Europe, according to figures compiled by research firm ETFGI. The U.S. ETF market has more than quadrupled in size this decade, while its European equivalent has only tripled.

But the momentum in Europe is gathering pace. At Amundi SA, Europe’s biggest asset manager, passively-managed funds accounted for 7.7% of the 1.5 trillion euros ($1.7 trillion) of its total assets by the middle of this year, up from 6.6% at the end of 2018 and 5.8% in 2017. Exclude the firm’s substantial Treasury holdings that are mostly held in cash, however, and the passive percentage climbs to 9% this year.

And the ETF market is attracting money even as other parts of the fund management industry suffer outflows. Amundi’s passive business, for example, had net inflows of 7 billion euros in the first half of 2019.

So far this year, the supply of ETFs in Europe has grown by almost 23 percent, handily beating the 16.5 percent expansion in the U.S. In the past three years, the volume of European ETFs has increased by almost eight percentage points more than in the U.S. Even with that growth, the bulk of Europe’s savings are still in active products.

U.S. active managers who have reacted to the threat to their livelihoods by calling index funds a bubble are whistling past the graveyard, as my Bloomberg Opinion colleague Nir Kaissar argued earlier this week. The overseers of European portfolios should brace for the day when passively-managed money overtakes its active counterpart – a day which is probably coming sooner rather than later.