Stock in the spotlight: Peloton president says treadmill market is 'even bigger' than bikes

Peloton Interactive Inc. was a Wall Street darling a year ago, with analysts almost universally recommending buying the home-fitness company’s shares after they had soared 434 per cent in 2020.

BMO Capital Markets’ Simeon Siegel was the first bear to predict the stock’s subsequent crash, and he says the pain isn’t over.

“From the beginning, our concern was that COVID was going to prove a pull forward of demand rather than an expansion of it,” he said by phone. “That’s what we’re seeing right now -- the faltering of demand. The problem was when 80 per cent of the company’s business is driven by equipment sales and equipment sales are generally a one time thing.” 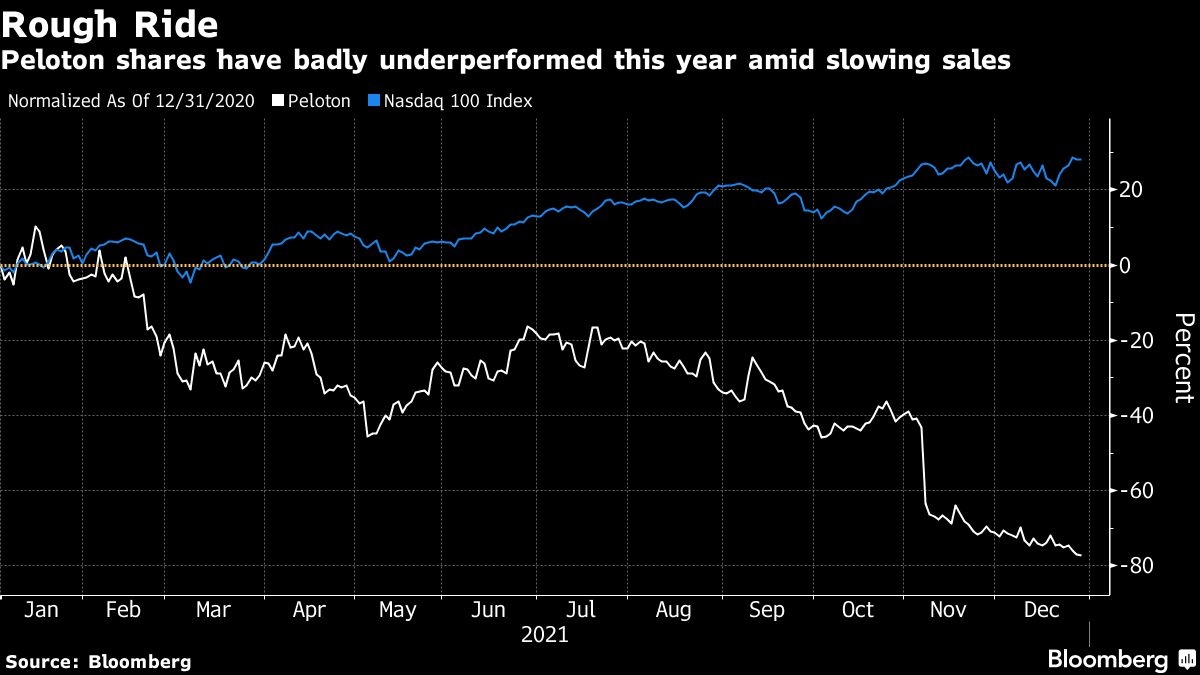 He warned investors about this last year, expecting that revenues would likely see pressure after that quarterly holiday season. At that time, Siegel had a share price target of US$33 and the first sell-equivalent rating on the stock.

Since then, Siegel -- who is also a Peloton user -- has maintained his underperform rating but raised his price target to US$45. In a Dec. 9 report, he questioned whether Peloton was losing control over its brand image when the company was forced to do some damage control after an iconic television character in the new “Sex and the City” show, “And Just Like That...”, died after using a Peloton bike.

“To all of their credit, Peloton’s marketing team is one of the best in the industry,” Siegel said. “And they did a fantastic job in telling that story and having people feel a part of something bigger. The problem was the story became louder than the numbers.”

Analyst recommendations have become less bullish as the company’s woes have mounted. Peloton’s ratio of buy ratings, holds and sells is at the lowest level since analysts started coverage after its 2019 debut. Sales have slowed as the world returns to a semblance of normalcy, and everything from product recalls to the unfavorable cameo in the “Sex and the City” reboot has hit its reputation. 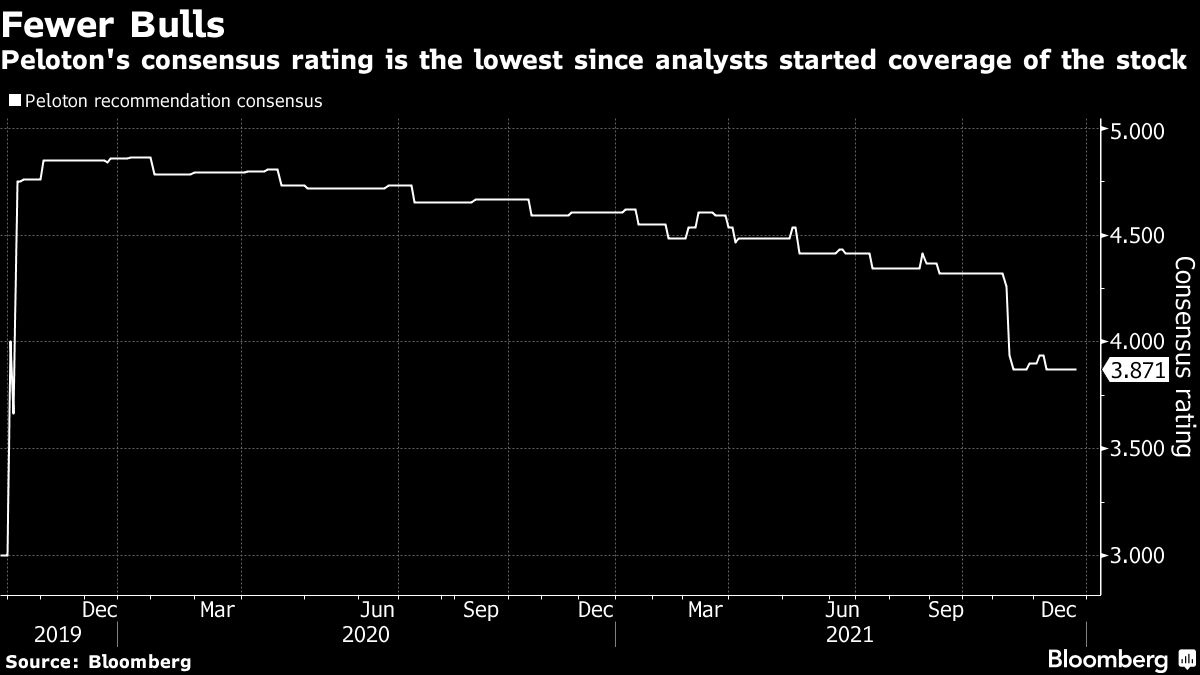 The stock currently has 16 buys, 13 holds and two sells among analysts tracked by Bloomberg. At the start of the year roughly 90 per cent of analysts recommended buying Peloton shares, even as they struggled to extend their meteoric rally from 2020.

The majority of analyst downgrades this year were prompted by Peloton’s disappointing quarterly results in November, when management slashed its annual sales forecast by as much as US$1 billion.

At least five analysts lowered their ratings following the guidance cut, which came just 10 weeks after the company first provided a fiscal-year outlook.

“It raises the bigger question around whether the company has a clear ability to forecast their revenues and profits,” said Rohit Kulkarni of MKM Partners, who reduced his rating from buy to neutral.

A Peloton spokesperson declined to comment on the stock price or analyst reports.

During the November earnings call, management said the company is taking “significant corrective actions” to improve its profitability outlook, which will impact the back half of fiscal 2022 and part of fiscal 2023.

Peloton shares have dropped in six of the seven weeks since the company’s quarterly update. The stock is down about 76 per cent in 2021, making it the worst performer in the Nasdaq 100 Index, which is up 28 per cent this year. Peloton closed at the lowest level since May 2020 on Wednesday.

Kulkarni expects the shares to remain under pressure until Peloton shows it can meet expectations and deliver a few consistent quarters. And the company may be several quarters away from that.

Google Search Trends data, which has been historically correlated with Peloton hardware sales, suggests demand has continued to soften in the December quarter, Raymond James analyst Aaron Kessler wrote in a research note earlier this week.

“Significant demand was pulled forward during the pandemic and as such sales are not seeing the typical seasonality that we would expect,” Kessler wrote. He anticipates guidance for the December quarter and fiscal 2022 will prove “aggressive.”

That said, plenty of Peloton bulls remain on Wall Street. The average analyst 12-month price target is US$74, which is more than twice the stock’s trading level of around US$35 but still a far cry from the all-time high of US$167.42 reached in January.

“2020 really accelerated that secular change,” Yruma said. “2021 was a leveling off period, but we think that that trend will continue over the longer term.”

For BMO’s Siegel, it will come down to demand.

“We’ve seen a company that was propelled to the big stage probably earlier than they should have been. Because if not for the pandemic, they would have just continued pushing along, growing at a very aggressive clip. But I think that they mistook the heightened demand during the pandemic for sustainable demand.”