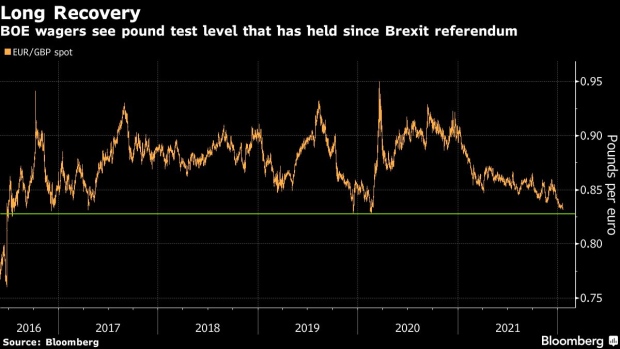 (Bloomberg) -- The pound is closing in on its strongest level against the euro since 2016, looking past political turbulence to focus on an anticipated Bank of England tightening cycle.

Sterling rallied 0.2% to 83.14 pence per euro on Wednesday, its strongest level since February 2020, even as speculation mounts that U.K. Prime Minister Boris Johnson could face a leadership challenge. The pound’s next big test is 83 pence, a level it has only briefly dipped below since the 2016 Brexit referendum and what Societe Generale SA strategists see as a “line in the sand” for the currency that it could struggle to overcome.

While the pound frequently reflected the political twists and turns of Brexit negotiations, the U.K. currency’s recent gains are all about BOE hikes to counter surging inflation, which are fueling a rates divergence between it and the European Central Bank. Threats to Johnson’s premiership are mostly seen as having little impact on sterling’s trajectory.

“With inflation set to be a drag on growth, action by the BOE on Feb. 3 should help to support the pound,” said Derek Halpenny, head of research for global markets, EMEA at MUFG. He doesn’t see much impact on sterling from political developments, with potential successors to Johnson likely offering “limited change to broader economic policy.”

Money markets have almost fully priced a BOE hike to 0.5% next month, with over 100 basis points of cumulative tightening wagered for 2022. A no-confidence vote in Johnson would be triggered if 54 Conservative lawmakers send letters calling for him to resign.