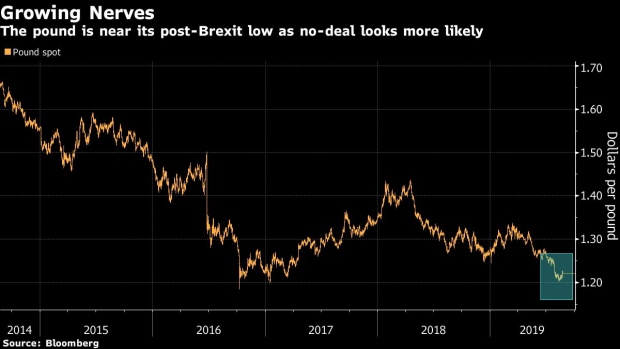 A pedestrian holds an umbrella, featuring the design of the European Union (EU) flag, as he shelters from the rain in City of London financial district in London, U.K., on Monday, Aug. 19, 2019. The European Central Bank blasted banks for slow-walking their Brexit preparations, telling them to move additional staff and resources to the European Union in case Britain leaves without a deal on Oct. 31. Photographer: Hollie Adams/Bloomberg , Bloomberg

(Bloomberg) -- As markets bet on a no-deal Brexit, the real shock for pound traders could be Prime Minister Boris Johnson clinching a sudden deal.

Sterling has tumbled in recent weeks as Johnson’s “do or die” stance has led traders to increase bets against the currency on the prospects of a no-deal Brexit on Oct. 31. Yet a surge of nearly 1% in a minute on Thursday, on a bare glimmer of flexibility from European leaders, gave a taste of how investors might be caught out by an agreement.

A no-deal Brexit is now the base-case scenario for Barclays Plc economists who see it as “increasingly inevitable,” while there’s only a 15% chance of a deal according to a recent Bloomberg survey. Johnson is hoping for a deal at the “final furlong” -- a sudden accord forged at a traditional late-night EU summit.

“If Johnson pulls off a deal -- which currently almost nobody is expecting, it isn’t even our base case -- that will really be a strong bull case for sterling,” said Daniel Trum, a strategist at UBS Global Wealth Management.

UBS Global Wealth is one of the few already betting on sterling’s recovery -- it forecasts an advance of more than 5% to $1.29 in three months -- based on an extension to the October deadline. Trum said there was a risk those betting on sterling’s decline could be “squeezed out of the position” by a deal.

The pound has been the worst-performing Group-of-10 currency in the past three months, losing 3% against the dollar to trade around $1.22. Hedge funds have amassed the biggest bets against the pound since April 2017, according to data earlier this month from the Commodity Futures Trading Commission.

The stretched positioning is leading the market to grab onto anything even remotely sterling positive, according to Jane Foley, Rabobank’s head of currency strategy. Johnson is set to meet European Council President Donald Tusk Sunday at the Group-of-Seven gathering, after German Chancellor Angela Merkel suggested Johnson needs to find a solution within the next month.

“There is this risk that if we did get some good news like a reduced risk of a no-deal Brexit, sterling will certainly react and it could react really quite violently,” Foley said. “We would see a massive spike higher in sterling if in the next 30 days Macron, Merkel and Johnson put together a plan and a compromise and push through Brexit with a deal.”

As the clock ticks toward the October deadline, the worry for some in the market is that a deal could come late at night, taking any announcement into the so-called witching hour between New York and Tokyo trading. Sterling crashed 6% in two minutes in October 2016, taking it to a 31-year low, at a time when London dealers were sleeping and those in New York were finishing up their day.

“If a deal were to be agreed outside of normal trading hours at a time of day when there tends not to be a lot of liquidity in the market, sterling would reprice higher,” said Richard Oliver, head of cash currency trading for EMEA at HSBC Holdings Plc. “Such a scenario would create market risk for investors, given they seem to be presently short in sterling as a way to hedge their Brexit risk.”

To contact the editors responsible for this story: Ven Ram at vram1@bloomberg.net, Neil Chatterjee, William Shaw