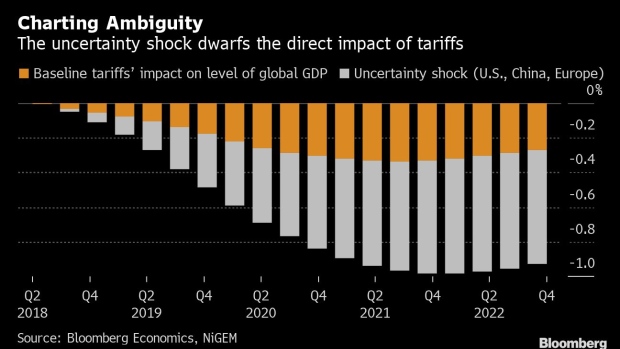 (Bloomberg) -- President Donald Trump’s tariffs on Chinese imports are getting a lot of blame for slowing the global economy, but it’s his Twitter habit that could be even more harmful.

According to a report by Bloomberg Economics’ Dan Hanson, Jamie Rush and Tom Orlik, uncertainty over trade could lower world gross domestic product by 0.6% in 2021, relative to a scenario with no trade war. That’s double the direct impact of the tariffs themselves and the equivalent of $585 billion off the International Monetary Fund’s estimated world GDP of $97 trillion in 2021.

China would be hit harder by the uncertainty factor, with its GDP lower by 1% compared with a 0.6% chunk taken out of America’s economic output, the analysis showed.

“The tweet is mightier than the tariff,” the Bloomberg economists wrote in their report.

The U.S. president’s social media posts on trade, many of which are about China, sometimes appear several times a day and other times not at all. His contradictory takes on the progress of negotiations with Beijing send a chill through businesses that are making decisions about investing and hiring.

A survey released last week by the Federal Reserve Bank of New York found a growing conviction among businesses that tariffs were hitting their bottom line.

The Fed responded to economic headwinds with a rate cut of 0.25% last month. The Bloomberg Economics report said that while monetary policy can be used to mitigate uncertainty shocks, it cannot prevent the damage entirely. If central banks respond to demand weakness, world GDP will be 0.3% lower in 2021 than it would be in a no-trade-war scenario.

To contact the reporter on this story: Eddie Spence in London at espence11@bloomberg.net

To contact the editors responsible for this story: Fergal O'Brien at fobrien@bloomberg.net, Brendan Murray, Brian Swint