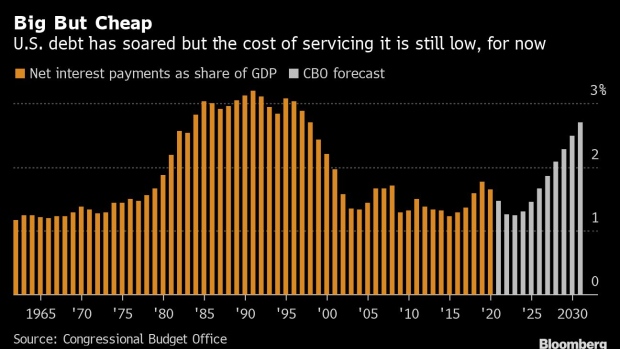 (Bloomberg) -- U.S. politicians are locked in a huge fight over something that more and more people in the financial world view as irrelevant.

Brinkmanship in Washington over whether to raise the debt ceiling or risk a default has become a 21st-century staple. But since the last major standoffs a decade or so ago, there’s been a sea change in the way investors, economists and officials think about public borrowing. They’ve become less interested in the debt’s size, and more focused on what it costs. Nowadays, that isn’t much -- and the Federal Reserve is helping make sure it stays that way, effectively keeping the $22 trillion Treasury market on a short leash.

The U.S. government’s interest payments over the next three years will be as low as any time since the 1960s, measured against the size of the economy, according to the Congressional Budget Office. That’s because the long decline in borrowing costs more than outweighs the extra debt taken on by the government to prop up the economy in the 2008 financial crisis and the pandemic.

It would take Treasury yields averaging about 2.5% across all maturities to turn that trend around, according to Bloomberg Intelligence. The average was below 1.6% in August, the lowest in more than two decades. Even after the past month’s surge, 10-year Treasuries are trading at yields of around 1.5% that are rock-bottom by historical standards.  What’s more, many investors say the Fed -– which on paper only controls short-term interest rates -- is the main driver of rates on longer-run government debt too, taking one sort of risk off the table.

“People assume now that if there’s any big troublesome jump in Treasury yields, then the Fed would have to go and do something to bring those rates back to earth,” says Felipe Villarroel, a portfolio manager at TwentyFour Asset Management.

The Fed has a mandate for stable prices and maximum employment, with no mention of debt. Still, there’s more than one reason why analysts think the Fed is now in the business of helping to manage the government’s debt costs. First, the surge in borrowing during the pandemic may weigh on central bankers as they prepare to reduce bond purchases and ultimately raise interest rates. Move too fast and they could suffocate the economy by making debt burdens more expensive.  It’s something Fed Chairman Jerome Powell “will need to balance,” says Sean Simko, global head of fixed-income portfolio management at SEI Investments Co. “Tapering, and trying to keep yields in check to contain the debt-servicing costs.”

Then there’s the fact that the Fed itself has been buying Treasuries and owns some $5.4 trillion of them. Even when it stops adding new ones, likely in mid-2022, that portfolio will loom large in the market. “The amount of Fed holdings -- just the stock effect, even when they begin to reduce the new purchases -- will help keep yields relatively lower for long,” says Subadra Rajappa, head of U.S. rates strategy at Societe Generale. Central banks like the Fed pay interest on the reserves they issue when purchasing sovereign debt. That ends up tying government borrowing costs even more closely to policy rates, according to Scott Fullwiler, an economics professor at the University of Missouri-Kansas City. Put simply, the Fed gets paid interest by the Treasury on the bonds it holds, makes its own payments on reserves, and sends the balance of profit back to the Treasury -– one arm of government to another. The upshot is that the chunk of public debt held at the central bank “has effectively become debt that’s serviced at the Fed’s target rate, quite explicitly,” says Fullwiler.

Across the developed world, rates on government debt are increasingly steered by policy makers rather than set by the market.

In Japan, sovereign bond yields have been an explicit target for years. Europe’s central bankers have been managing the spread of borrowing costs between stronger and weaker economies, to ensure there’s no repeat of last decade’s euro crisis.

None of this means that the evolving new regime has permanently solved the problems of public finance -- or that it doesn’t carry risks of its own.   Politics can trigger a developed-country debt crisis even when there’s no economic reason for one, as the current standoff in Washington shows. Europe could suffer its own version when the pandemic waiver for caps on government borrowing runs out.

Governments could also take low borrowing costs as an invitation to spend on a scale that causes persistently higher inflation. That risk appears remote in Europe and Japan, which have been stuck in deflationary traps for more than a decade. It may be more acute in the U.S., where pandemic stimulus was bigger and Congress is debating another $3.5 trillion spending program. Inflation, and not the size of the debt or even the cost of servicing it, is the issue that U.S. fiscal-policy makers should be thinking about in the near term, according to Mark Zandi, chief economist at Moody’s Analytics. “It will probably be 10 or 15 years down the road until interest expense as a share of GDP is ringing off alarm bells,” he says. But meanwhile, “if you run large deficits in a full-employment economy, you run the risk of overheating -– specifically, inflation.” In the country where ultra-low rates and becalmed bond markets arrived first, the opposite scenario has prevailed.

Japan’s government owes more than twice as much as America’s (relative to GDP), and pays even less to service it. The challenge for policy makers hasn’t been to put a ceiling on the debt -- but to put a floor under economic growth, in the face of long-term drags from demographics to private-debt overhangs.

Ultimately, that’s a more likely outcome -- in the U.S. and elsewhere -- than a bond-vigilante revival, according to Steven Major, head of fixed-income at HSBC. “Developed bond markets have not all arrived at full Japanification yet,” he wrote in a report. “But they are on the way.”