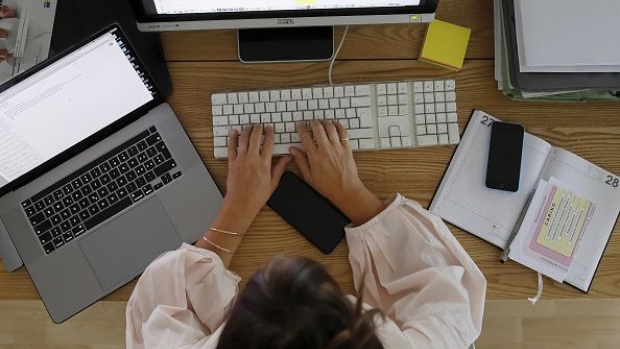 Does her dog have a hackable collar? , Photographer: Bloomberg/Bloomberg

(Bloomberg Opinion) -- South Korea is in something of a sweet spot for the Covid-19 era. Neighboring China, its biggest trading partner, is driving the global rebound and the world increasingly wants the technology that Korea sells.

Gross domestic product figures are encouraging. The economy expanded 1.9% in the third quarter from the prior three months,  the government reported Tuesday, exceeding forecasts and the first positive reading this year. Growth retreated 1.3% on an annual basis, a milder decline than projected. The numbers are the second upbeat installment from North Asia in little more than a week. Recent figures indicate China is likely to be the only commercial power to show any growth this year. South Korea may come close, as could Taiwan.

South Korea's bounce is built on what leaves the country. Exports account for about 40% of the economy. Memory chips and electronics have benefited from a shift to work-and study-from-home during the pandemic. Other things shipped by Korea, like chemicals and metal products, haven't done so well. While this mix means Korea is vulnerable to an eventual rebellion against the kitchen-table conference room, that prospect doesn't appear imminent. Even hubs for global finance with strong executive government, such as Singapore, are slow-walking the return to downtown. WFH remains the default for much of the world.

Seoul's willingness to cast off decades of budget prudence, too. No matter how many container ships or cargo planes dot the horizon, there's little substitute for cranking up the printing press in fallow times. President Moon Jae-in has rolled out four stimulus packages as part of a fiscal onslaught equivalent to about 14% of GDP. While the government is anxious to repair the books once the recovery is assured, it would be premature to ease up now. Moon has space to do even more. South Korea's debt levels, relative to the economy, are among the lowest in the Organization for Economic Cooperation and Development.

Muscular fiscal policy means more borrowing. Moon has been aided by a central bank that's prepared to buy bonds on a fairly regular basis in the name of market stability. While the Bank of Korea shies from the term “quantitative easing,” it is keeping a lid on the price the government pays for money.

Perhaps the real achievement is that the country kept coronavirus infections in check and returned to growth without a comprehensive lockdown or equally forced rapid reopening. China is aided by an authoritarian political system that can turn the key in either direction without dissent. South Korea is a democracy. Social distancing, contact tracing and dialing up (or down) other curbs on a localized basis worked pretty well.

Lots could still go wrong. The global economy might take a turn for the worse, given the recent jump in U.S. and European infections. And at home in Korea, the natural boost an economy gets after exiting recession will eventually wear off. The country was posting fairly sluggish growth numbers before the pandemic. Unemployment is rising. And while it’s a relief to see growth return, the second-quarter contraction was the worst in decades.

For now, though, let's acknowledge a job that's been relatively well done.