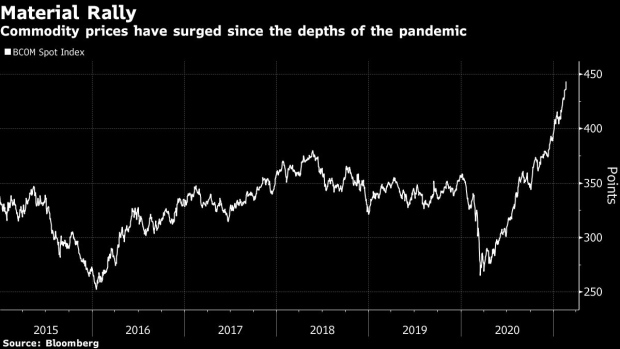 (Bloomberg) -- Commodities markets are booming. Oil is up about 30% this year, copper just hit a nine-year high and grains markets are experiencing shortages.

But there’s a subtler factor helping propel the value of the world’s raw materials ever higher: yield.

At a time when interest rates are feeble and bond yields remain historically depressed, rolling positions along the commodities futures curve offers passive investors tempting returns. It’s a proposition that has gotten some of the biggest research departments on Wall Street, from Goldman Sachs Group Inc. to Citigroup Inc. talking up commodities returns this year.

The logic is simple. When markets are tight, nearby futures contracts are more expensive than later ones. That means investors can buy contracts today, and when they have to roll them to later months, they get the same exposure at a cheaper price, even if headline values don’t move. Over 12 months that process -- known as positive carry -- currently returns 9% in oil and about 3% in copper. It’s one of the key reasons money is now flowing back into the sector.

“If you’re in a positive carry market, it’s really a good thing,” said Greg Sharenow, a portfolio manager focused on energy and commodities at Pacific Investment Management Co. “It could be a really significant driver of returns and a really important component of how an investor performs in the next year.”

The fundamental reasons behind the rally in commodities markets vary. In oil and copper markets, there’s an expectation that demand will begin to eclipse supply amid the roll-out of vaccines and loosening of movement restrictions, coupled with economic stimulus measures.

Other markets are seeing more particular factors. Sugar, for example, is benefiting from port delays and a shortage of containers to ship the sweetener, as well as smaller crops in some regions.

In the broadest terms, though, one thread links the multibillion dollar markets for raw materials: the desire of investors to profit from a rebound in the global economy and inflation.

“Part of what you’re seeing pushing these markets higher right now is that hedging demand to deal with inflation,” Jeff Currie, head of commodities research at Goldman Sachs said in an interview with Bloomberg Television. “The demand to hedge that risk through commodities is quite high.”

And that’s where the tantalizing yields come into play. In a basket of 20 commodities, net-bullish positions have risen 16% this year alone. They’re up more than sixfold since the middle of last year.

There may be more to come. Citigroup Inc. says surging demand will see copper prices hit $10,000 a metric ton in the coming months. Last week, Deere & Co. boosted its profit outlook, with the tractor giant seeing the early days of a demand pick-up in the farming economy. Over the last 10 years, when oil yielded this much, prices were at least $10 higher, and sometimes nearer $100 a barrel.

It’s how the cycle continues. As prices rise, so-called backwardation -- in which nearer-term contracts are costlier than those for later dates -- is steadily amplified. That in turn helps attract new investment, and means prices keep on rising.

“I suspect backwardation can go higher,” Ben Luckock, co-head of oil trading at Trafigura Group said in a Bloomberg TV interview, referring to the crude oil markets. “We are very bullish what the market looks like going forward and that means backwardation is here for the foreseeable future.”