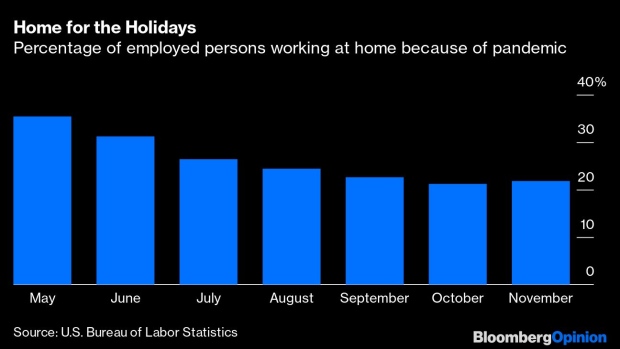 (Bloomberg Opinion) -- The slow return to the office of summer and early fall appears to be over, for now. Office occupancy in the 10 big metropolitan areas tracked by Kastle Systems,(1) which manages security access for commercial real estate owners, has been declining since late October and hit 24.78% last week. This did amount to a slight bounce-back from Thanksgiving week, but the trend is clearly downward.

Last week’s jobs report contained similar news. The share of employed Americans working at home because of the pandemic rose from 21.2% in October to 21.8% in November, the first monthly increase since government survey-takers started asking about this in May. (This figure does not include those already working at home before the pandemic — who make up somewhere between 5.7% and 14.6% of the workforce, depending how you measure it.)(2)

To some extent this is as it should be. Amid a deadly pandemic, the ability of tens of millions of Americans to do their jobs remotely has slowed the spread of disease while enabling economic activity to continue in ways that would have been unimaginable a few decades ago. With the end of the pandemic now (probably) in sight, it’s surely not the worst thing to put off the return to the office for a couple more months.

But most Americans can’t do their jobs from home. According to the BLS, only about one-third of U.S. workers before 2020 held jobs that could feasibly be performed remotely. For the two-thirds who didn’t, the pandemic has meant higher job losses and higher risk of disease and death for those who kept their jobs. Here are the occupational categories with the lowest percentage of workers reporting they worked at home because of the pandemic in November.

“Production,” in case you were wondering, is mostly manufacturing jobs, but also includes laundry and dry-cleaning workers, upholsterers and dental laboratory technicians, among others. This is blue-collar work, mostly. The occupational categories with the highest work-at-home percentages in November were, not surprisingly, overwhelmingly white-collar and professional.

The ability to work from home is also very much determined by educational attainment.

It is of course not news that people’s ability to navigate safely through this pandemic has varied greatly by socioeconomic class, but the work-at-home data really make the point starkly. If you’re interested in more information on it, I explored some other aspects in a column in October — or you can just download the spreadsheets straight from the BLS.

The Kastle Systems data, meanwhile, allow for a view of some of the regional differences in working at home this year.(3)

New York and San Francisco have had very different pandemic experiences, with the former among the hardest-hit places on the planet last March and April and the latter quite successful in keeping Covid-19 at bay. But both have lots of highly educated, highly paid workers in tech, finance and other fields conducive to remote work, and as a result their business districts remain mostly deserted. Working from home can save lives, but it can also kill downtowns.

More generally, the success of the Great Work-at-Home Experiment of 2020 seems like one of the key reasons why the U.S. economy has weathered the pandemic better than almost anyone expected last spring, and is poised to take off next year. But it has left a lot of people, businesses and places behind. For a few more months, at least, they’re going to need help.

(1) They're available on the Bloomberg Terminal at {ALLX KASL }.

(2) The former percentage comes from the Census Bureau's 2019 American Community Survey question about how people get to work, the latter from a private survey conducted in April, when pandemic job losses drove down the denominator.

(3) At the time of writing there were some modest discrepancies between the numbers Kastle Systems provides to Bloomberg and those on the company's website, so I went with the former.