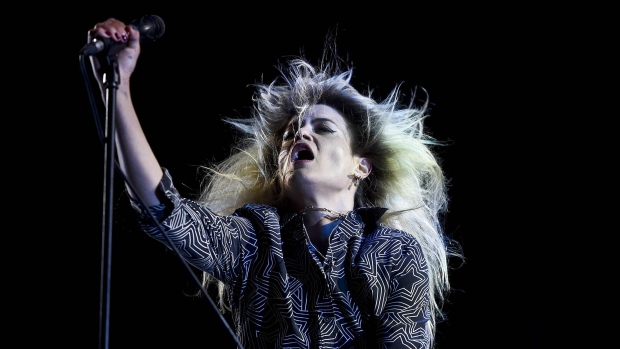 U.S. Lead singer Alison Mosshart of the North American band The Kills performs on stage during the 11th edition of the Alive Festival in Oeiras, near Lisbon on July 7, 2017. , AFP PHOTO / PATRICIA DE MEL

One woman who knows all about finales is this week’s guest. Alison Mosshart is a member of not one but two rock bands: The Kills, which she co-founded with Jamie Hince, and the supergroup Dead Weather, where her bandmates include Jack White. She’s been playing out since her teens, and often logs more than 500,000 miles in the air every year. So it’s obvious Mosshart’s a guru of good travel advice.

She tips off co-hosts Nikki Ekstein and Mark Ellwood to her favorite hangover cure from Switzerland, plus the unlikely European city she thinks everyone should visit. As for the souvenir Mosshart picks up on every stopover? It involves a kitschy ritual she started back in her earliest days as a touring musician—and is a nod to her second career as a multimedia artist.

The ultimate topic Mark and Nikki tackle is the ultimate frontier: space. After several years of prep and test flights, Richard Branson’s Virgin Galactic is primed to take off this year with paying passengers. Every seat costs a cool $750,000 (no wonder Angelina Jolie is among those reported to have signed up). But Branson isn’t the only human aiming to become a real-life Star Trek commander: his fellow billionaires, Jeff Bezos and Elon Musk, have their own rival operations.

While we’re on hiatus, please keep those voicemails coming. We’ve pulled together some great tips so far, and are priming a killer listener week for season 3—but we still need more. Call the Travel Genius hotline at 646 324 3490 anytime, and leave us a voicemail (which we may just play on an upcoming episode). Otherwise, hit Nikki and Mark up on Twitter or Instagram with your hacks and ideas.