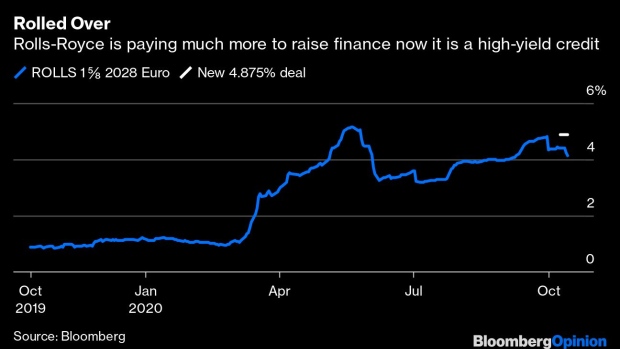 (Bloomberg Opinion) -- Rolls-Royce Holdings Plc, the famous old British jet-engine manufacturer, is paying the price for its recent troubles. A two billion-pound ($2.6 billion) bond sale on Wednesday — in dollars, euros and sterling — comes with much higher coupons than its previous debt issues. It will regret losing its investment-grade status earlier this year.

The company still has debt-market appeal, however. This is the third-biggest junk bond sale this year, and demand has been high. Back in June, we had Fiat Chrysler Automobiles NV’s 3.5 billion-euro ($4.1 billion) issue and a 2.25 billion-euro bond to finance the private equity buyout of ThyssenKrupp Elevators.

A high-profile name like Rolls-Royce might have fared even better by ditching its credit ratings and relying on its brand recognition to attract investors with a less juicy coupon. That’s a fairly common option for bond issuers who aren’t happy with their ratings and feel they could argue a better case directly with the market — especially as a “fallen angel” that’s being unduly punished because of the pandemic.

Despite still having BB-rated credit, toward the upper end of junk ratings, S&P Global has placed Rolls-Royce on negative watch for another downgrade. That means it has to offer a substantial premium to its existing debt to attract new high-yield investors.

In fairness to the ratings companies, the British manufacturer’s problems predate the catastrophic impact of Covid-19 on aviation. My colleague Chris Bryant has detailed how Rolls-Royce was stumbling beforehand. This bond offering is the last step in its refinancing plans after a two billion-pound equity raise, and up to five billion pounds of government and bank-loan facilities are already in place. After doubling the amount it wanted to raise from the bond markets, the company had to offer a bigger return.

Rolls-Royce’s last big bond issue, a 10-year maturity in euros sold in 2018, had a coupon of just 1.625%, although the yield on that has risen above 4% during the pandemic. This week’s new euro issue was offered initially at 5.25%, but it’s expected to price at 4.875%. Similar strong demand also let the lead managers “walk in” the final coupons on the new dollar and sterling notes by 25 basis points to 6%.

While this could have been even worse, it’s still painful for one of Britain’s last blue-chip industrial names. Rolls-Royce needs as big a liquidity buffer as possible to get through this crisis, but having to pay a coupon that’s three times higher than what it secured just two years ago will make its climb back up harder.

Rolls-Royce has paid a stiff price to ensure capital markets access. Its interest costs have just soared but at least it’s buying itself some breathing space.