Canada’s housing market is running hotter than just about anywhere else in the world.

But despite the anxiety about irrational bidding wars and fears of the bubble bursting, what's fundamentally driving it is a worsening imbalance between supply and demand: Buyers want large homes but increasingly can’t have them because there isn’t enough space in and around the major cities where people work.

The world's second biggest country by landmass is effectively running out of space, and that has Canada on course for a reckoning. The dream of a detached home and a piece of land, which generations of Canadians have taken for granted, and which continues to entice new immigrants, may soon be out of reach in the places where people want to live. That could force an expansion of the idea of home to include condos and rentals, potentially transforming how the middle class does everything from raising families to saving for retirement.

“Running out of land in Canada is a relatively recent phenomenon compared to Europe, or Japan, or other parts of the world,” said Robert Hogue, an economist at Royal Bank of Canada. “I think that for future generations, homeownership is going to look a lot more European, for example, than it does today.”

In Canada, buying a home has long been seen as the surest path to middle class security. Canadians on average live in some of the biggest houses in the world, and post higher rates of homeownership than in the U.K., or France, or even the U.S. The pandemic has put an even bigger premium on backyards and extra space.

Nearly 60 per cent of home sales last year in 18 communities in and around Toronto, Montreal, Vancouver and Ottawa were for single-family detached houses, according to data compiled from local real estate boards by Bloomberg News. Only about a quarter of the sales in these places were for apartments.

But when you look at what has been built in these same cities and their nearby bedroom communities over the last decade, the percentages are exactly reversed: 60 per cent of new housing stock is apartments, and just 25 per cent detached houses, according to government data compiled by Bloomberg. That mismatch has forced desperate bidders to vie for an increasingly constrained supply of single-family homes. In 2020, Canada’s benchmark home prices gained almost 15 per cent, with only Luxemburg posting a bigger increase, according to a data from the Dallas Fed. 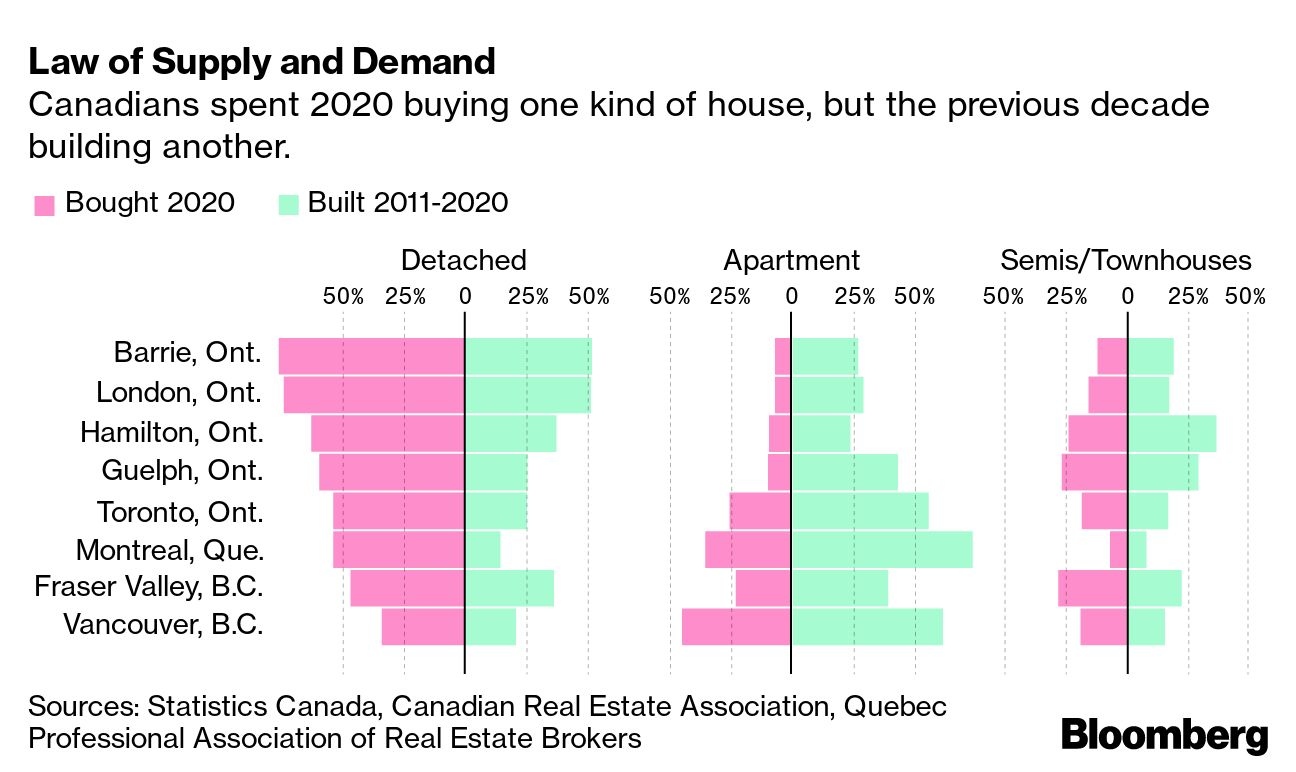 Still, developers don’t seem to be responding. Though construction started on a record number of new homes in Canada’s metro areas in March, the percentage that were single family-detached actually fell to 19 per cent from 24 per cent the previous year, according to government data. While this ratio improved in April, new home starts slowed that month overall.

“If there is a problem it’s in the composition of the new supply,” said Robert Kavcic, an economist with the Bank of Montreal. “We don’t build single detached homes anymore. And it just so happens from a demographic perspective that’s what the market demands. So we’re kind of stuck on that front.”

It comes down to land. While Canada boasts a total area of about 10 million square kilometers (3.9 million square miles), roughly 40 times the area of the U.K., most Canadians are clustered in a handful of major cities not far from the U.S. border. That’s where the jobs are. And while the work-from-home era has expanded that radius for some, turning quiet farming communities and weekend-getaway spots into the hottest real estate markets in the country, the possibility of returning to the office even a few days a week has kept most workers from striking out too far afield. 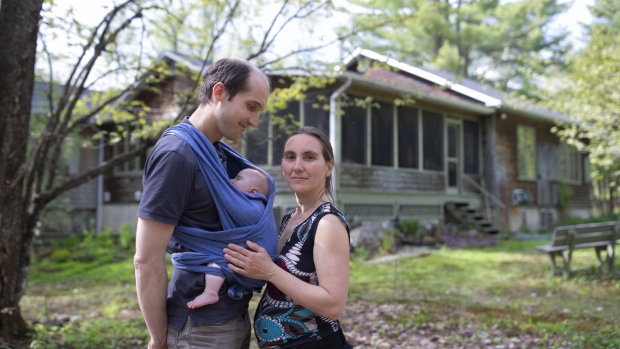 City-specific factors have constrained land use even more. Vancouver is squeezed between the Pacific Ocean and the mountains; provincial regulations against urban sprawl have effectively turned Toronto and Ottawa into islands for the purposes of development; and Montreal actually is an island.

“If we think of first-time home buyers, a young couple starting out, it’s much more realistic for them to be considering a condo apartment as a starter home from an affordability standpoint,” said Royal Bank of Canada’s Hogue. “This is the norm for large global cities. I’m hard pressed to think of any major global city where a single-detached home near the core urban area is affordable.”

Canada is going to need more apartments too, especially as Prime Minister Justin Trudeau moves to boost immigration to historic records to make up for the pandemic lull. The country has a shortage of homes generally, posting the lowest number of housing units per 1,000 people among Group of Seven countries, according to a recent report from the Bank of Nova Scotia.

That pressure means the slack that’s appeared in urban condo and rental markets over the last year is expected to be short-lived, going a long way to explaining developers’ focus on density. Rather than land constraints, the main obstacle to building more apartments in Canada’s cities is local zoning regulations.

But even if more apartments get built, Canadians will have to get used to living in them. Giulia Zaccagnini, a 42-year-old massage therapist, has always lived in apartments, from her childhood in the suburbs of Paris, France, to her time in  Montreal after immigrating to Canada. But when the pandemic made remote work possible, she and her husband bought a detached property in a town about an hour outside the city to raise their three kids.

Still, with home prices forecast to keep rising, future Canadians may have an experience more like what Zaccagnini remembers of Paris.

“I didn’t know anyone who was living in a house,” she said. “That was for really rich people, I suppose.”