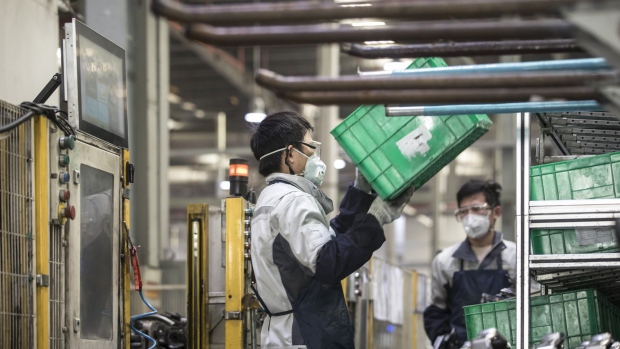 Employees wearing protective face masks work on a production line during a media tour at a Yanfeng Adient Seating Co. factory in Shanghai, China, on Monday, Feb. 24, 2020. Central and local governments are loosening the criteria for factories to resume operations as they walk a tightrope between containing a virus that has killed almost 2,600 people and preventing a slump in the world’s second-largest economy. Photographer: Qilai Shen/Bloomberg , Bloomberg

​Since last week, emails from foreign clients have been flooding into export manager Grace Gao’s in-box, asking to delay orders already made, putting goods ready to be shipped on hold until further notice, or asking for payment grace periods of up to two months.

Gao’s firm, Shandong Pangu Industrial Co., makes tools like hammers and axes, 60 per cent of which go to the European market. As the virus ravages the continent from Spain to Italy, the shutdowns there are cutting off orders to Chinese factories just as they were beginning to get back on their feet. It’s a story playing out across the country.

“It’s a complete, dramatic turnaround,” lamented Gao, estimating sales in April to May will plunge as much as 40 per cent from last year. “Last month, it was our customers who chased after us checking if we could still deliver goods as planned. Now it’s become us chasing after them asking if we should still deliver products as they ordered.”

This emerging pattern poses a grave risk to the chances the world’s second-largest economy can repair the damage from the closures in February to curb the virus. Even as policy makers including Premier Li Keqiang talk up a recovery and roll out support measures, economists continue to cut their growth forecasts.

“It is definitely the second shock-wave for the Chinese economy,” said Xing Zhaopeng, an economist at Australia & New Zealand Banking Group. The global spread of the virus “will affect China manufacturing through two channels: disrupted supply chains and declining external demand.”

The earliest insight from official data into the emerging pain for industry will come on March 31, when the purchasing managers’ indexes for the month are released. But unless there is a strong rebound, the record slump in profits seen in the first two months of the year is likely to continue.

In the meantime, firms are saying that canceled orders, uncertain logistics and delayed payment have become their latest headaches.

“Manufacturers are seeing many cases where overseas clients regretted their orders or where goods can’t be delivered due to customs closures in other countries,” said Dong Liu, vice president of Fujian Strait Textile Technology Co. in southeastern China. His factory was about to resume full capacity, after the return of workers who had been stranded in Hubei province, the center of the original outbreak. “The dent on export orders is rather serious.”

China is already facing its first quarterly contraction in decades and the weakest year since 1976. In a worst-case-scenario laid out by Bloomberg Economics, recessions in the U.S., the euro-area and Japan will chop some US$2.7 trillion off of global output.

The cancellation or postponement of big sporting events, from the National Basketball Association season to the Summer Olympics, has also hit Chinese factories.

”A week or two after returning from Chinese New Year -- starting from mid February -- we started to feel our orders began to disappear one after another,” said Alice Zeng, whose company AQ Pins and Gifts Co. sells metal souvenirs. “First it was some marathons in Japan that were pulled. And then orders in Europe, and then the U.S.”

The firm exports 100 per cent of its products and had been expecting a contract to supply Euro 2020, the now-canceled European football tournament. Her suppliers’ factories in Dongguan, near Hong Kong, are still busy now, but there’s not likely to be many new orders from April, Zeng said.

A nascent stabilization had been underway this month, aided by the government’s relative success in limiting the disease outbreak. Confidence at small and medium-sized companies rose in March, though it remained at a level indicating contraction. Bloomberg’s suite of early indicators also showed activity rising from the unprecedented lows seen in February.

In Keqiao, Shaoxing, a district on China’s east coast that’s famed for textiles, factories are hurting amid record cancellations of orders. Since factories there re-opened this month, some 78 per cent of companies have seen reduced orders and 65 per cent have had some existing orders canceled, according to a local industry survey.

The lockdown spreading to many countries is also making delivery uncertain and delaying payments -- another nerve-wracking situation for small enterprises with thin cash flows.

“We have to keep the products even after we ready them,” said Janny Zhou, an export manager at an auto-engine parts maker with 200 employees in the eastern city of Taizhou. “Overall our clients can’t pay us in time because banks are closed and they themselves are asked to stay at home.”

The government is responding to the emerging crisis by focusing on keeping workers in jobs even if their income is cut. Policies including delayed social security payments have been floated in some places, but as yet no blanket measures to keep firms operating through the downturn have been unveiled.

The Ministry of Commerce acknowledged that some export orders have been canceled amid rising external uncertainty, and promised to help exporters with tax rebates, insurance and credit. The government will support companies to build warehouses in some key trading nations and streamline customs clearance, among other actions.

“The worst is yet to come for exports and supply chain,” said Larry Hu, Chief China Economist at Macquarie Group Ltd. “For the whole year, China’s exports could easily fall 10 per cent or probably more.”