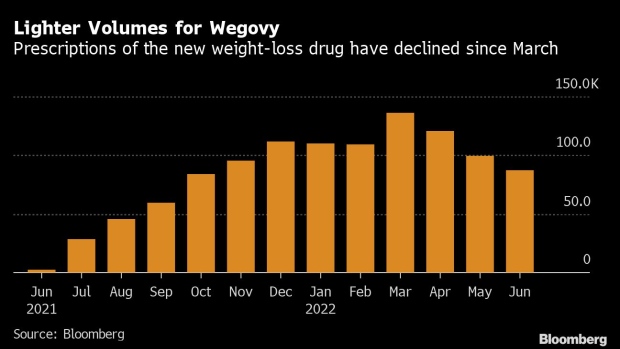 (Bloomberg) -- The weight-loss startup Calibrate Health Inc. attracted thousands of customers with an enticing pitch: It could get them low-cost access to obesity drugs like Wegovy, a breakthrough, $1,350-a-month medication that helps people lose 15% of their excess weight.

For some of those patients, that deal turned out to be temporary. Calibrate told people it would work with their health insurance providers to get drugs covered. But US insurance coverage for Wegovy is sparse, and about a fifth of the startup’s customers were instead enrolled in a generous coupon program from the drug’s maker, Novo Nordisk A/S, that ran out after six months.

When those coupons expired, some Calibrate customers were shifted from Wegovy to other products, many of which haven’t been explicitly approved for weight loss. Other patients faced a choice between paying the full cost of the drug or stopping therapy, though the company said it worked with insurers to try and get medications covered. Five current and former patients told Bloomberg they weren’t informed about the use of a coupon, finding out in some cases only after their supply ran out, or when they were told an expensive bill was coming.

Calibrate said the issue only affected 20% of its customers as of March. Pharmacies it works with “are responsible for notifying patients if they use a coupon,” but it could have done a better job communicating with its customers, the company said.

Isabelle Kenyon founded in Calibrate in 2019. The University of Pennsylvania graduate, Forbes “30 Under 30” honoree and investment banker-turned-entrepreneur took an interest in medications like Wegovy after a relative’s medical experience led her to learn about weight-loss medications. The company — which says it now has more than 20,000 customers — is part of a new generation of health startups that have tried to meet real medical needs. The startups serve patients seeking help with weight loss, mental health or other conditions and who are frustrated by the traditional health system. But as Bloomberg has reported, some of those companies have run into challenges when facing the realities of complex medical conditions, strict regulations and entrenched competitors.

In a statement sent to Bloomberg, Kenyon said that “when a Wegovy patient access program abruptly ended after six months, we were responsive and accountable to our members. We found alternative clinically appropriate medication coverage or offered a refund to affected members. More than half chose to stay in our program without medication, and we refunded the remaining group.”

Calibrate has raised about $130 million to date and is valued at nearly $400 million, according to PitchBook. The company declined to comment on those financials.

Calibrate charges its customers around $1,650 for a “one-year metabolic reset” of virtual meetings with doctors and health coaches. And it has tied itself closely to weight loss drugs: A Google search for “Wegovy,” Novo Nordisk’s drug, as well as related terms, lists an ad for Calibrate ahead of a Novo-sponsored website for the drug itself.

Wegovy belongs to a powerful class of drugs called GLP-1s. Novo’s product was approved in the US in mid-2021 after helping patients lose about 15% of their body weight. But the injections are expensive, and aren’t included in Calibrate’s membership price. While access to weight-loss drugs is part of the company’s pitch to customers, the company said it does not make money on pharmaceutical sales.

Across the US, patients often have to pay out of pocket for the $1,350-a-month drug. Of the 109 million Americans with obesity who could be eligible, only about 30% have insurance that covers it, Novo Nordisk CEO Lars Fruergaard Jørgensen said in an interview with Bloomberg, speaking about the total market for the therapy. Novo has also faced supply issues with the drug, and earlier this month its shares fell 9.4% after reporting sales below stock analysts’ projections.

Novo’s coupon offered patients six months of Wegovy for about $25 a month. The drug became the first medication Calibrate would consider for its weight-loss patients, and the startup also asked patients on other drugs if they wanted to switch to Wegovy, said a former employee, who spoke to Bloomberg on condition of anonymity because of their severance agreement. It also began to use Novo’s coupon program to make sure they got the drug at little cost.

Then, in December, Novo stopped new enrollment in the coupon program, meaning that for the last people to sign up with Calibrate and be prescribed Wegovy, the low-cost deal ran out in June.

As the Wegovy copay program began to wind down new access, Calibrate ramped up efforts to enroll customers in it, starting patients on Wegovy without checking to see if their insurance would cover other medications, the former employee said.

A Calibrate spokeswoman disputed the former employee’s characterization that the company favored Wegovy over other drugs, and said that the company currently prescribes six different GLP-1 medications.

“Which GLP-1 medication Calibrate doctors prescribe is at the doctor’s discretion based on what is clinically appropriate for the member, which medication is covered at an affordable monthly cost by a member’s insurance plan, and what medications are in stock, in that order,” the spokeswoman said.

One of the patients who joined Calibrate at the end of last year was Alicia Hunt, a 41-year-old teacher in Allen, Texas. Hunt said she lost about 25 pounds taking Wegovy and another medication.

“I felt like Calibrate was a godsend,” Hunt said. “And then the rug was pulled out from underneath me.”

Hunt said that while she knew a coupon was a possibility, she wasn’t told it had been used. Her coupon ran out in May, and she was able to obtain a partial refund from Calibrate for the membership.

The company declined to comment on Hunt’s case, citing member privacy. It said a pharmacy it had worked with was likely to blame for some patient confusion, and that it had stopped working with the vendor.

Currently, Calibrate’s website does mention its use of manufacturer discount programs to lower costs. But previously, the company didn’t always disclose its use of such programs, according to captures from late last year by the Wayback Machine, an online archive of old web page versions.

“We updated all of our member-facing language to ensure more consistency and clarity around how members were accessing their medication,” Calibrate said in a statement provided to Bloomberg.

The 20% of patients who had been on Wegovy coupons is comprised of 14% who were moved to an alternate GLP-1 drug, 3% who stayed with Calibrate without a drug and 3% who left the program and received refunds, Calibrate said.

“In the real world, most patients do not have access to GLP-1 medications,” a spokeswoman for the startup said. “Calibrate is working to create a new model of care for obesity and cardiometabolic disease, and this means navigating a system that is currently obstructing access.”

Research suggests that people taking other GLP-1 drugs can lose weight, but only some of the medications prescribed by Calibrate have been approved by the US Food and Drug Administration for obesity. Doctors have said Wegovy is a game-changer because it has been able to achieve double-digit reductions in weight, unlike other drugs.

“Calibrate only treats people who meet the FDA’s criteria for obesity treatment with GLP-1 medications,” a Calibrate spokeswoman said. “This includes the use of brand name medications labeled for both diabetes and obesity treatment with the same underlying molecules” such as Novo’s Ozempic. The company said it has seen similar weight-loss results using alternative products.

Toni Valenti, a 63-year-old director of marketing in Delray Beach, Florida, lost nearly 30 pounds on medication before the coupon ran out. Valenti, who got a partial refund from Calibrate, called the experience a “bait and switch.” The company declined to comment on her case, citing patient privacy.

“The whole point is the medication,” Valenti said. “I don’t think they really thought it through. What’s the plan when no one can buy the medication?”

Novo’s coupons were a great deal for Calibrate’s customers, but also posed the problem of what to do when they ran out. Early this year Calibrate created an internal group of about 10 to 15 employees called the “End of Wegovy” team. As patients lost access, the team would determine if they were eligible for insurance coverage of another GLP-1 drug and work to switch them, according to two former employees, both of whom asked not to be named while talking about internal matters.

Calibrate has acknowledged that its patients weren’t always informed about the coupons. According to communications seen by Bloomberg News, the startup emailed customers in the Spring and said that “we did not always communicate to members that their pharmacy was using a Wegovy patient access program,” and apologized for not always communicating that low-cost access to the drug could run out. It also offered to refund customers.

“We know that uncertainty around medication is worrisome and frustrating,” the company said in the email.

While Calibrate has embraced Wegovy, Wegovy’s maker hasn’t necessarily embraced Calibrate. A Novo spokeswoman said that the company doesn’t have a relationship with Calibrate. She also said the drugmaker had previously asked Calibrate to take down website mentions of Rybelsus and Ozempic, two other Novo diabetes medications that use the same molecule. Calibrate declined to comment to Bloomberg about Novo Nordisk’s request, though Calibrate’s website still has pages mentioning both products as weight-loss treatments, though the FDA has not officially approved them for that use. Calibrate also continues to advertise the availability of Wegovy through its platform.

On July 8, after Calibrate had grown to 652 employees, the start-up laid off 156 people, about a quarter of its workforce. On that day, Kenyon addressed Calibrate employees and said she was restructuring the business to respond to economic changes, as the market was now valuing profitability instead of growth, and that layoffs were needed “to set Calibrate up for long-term sustainability.”

“We will focus on three critical priorities going forward: serving our current members, driving operating efficiency and launching our enterprise business this summer with employers,” she said, according to a recording seen by Bloomberg.

(This story has been corrected and clarified to add more information about what percentage of the company’s patients sought refunds, to remove an ambiguity about the origin of the coupon program, and to correct the attribution of statement in the 25th paragraph to note that the comment came from Calibrate.)