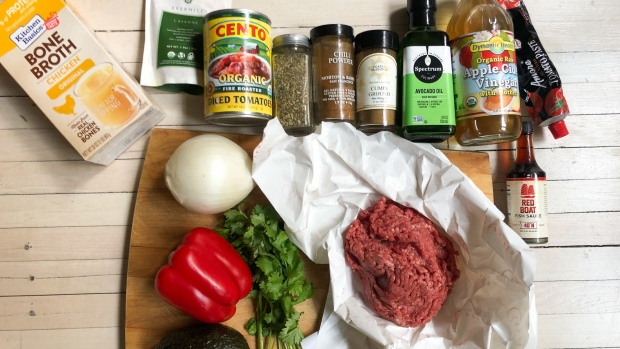 Food is meant to be one thing that brings people together. But a pot of chili provokes strong conversations.

In Texas, where it’s the official state dish, locals believe that beans are off the table, as are tomatoes. In Oklahoma and much of the Midwest, they’re happy to add both.

Michelle Tam is aware of the debate. The beloved creator of the Nom Nom paleo-eating empire, dubbed the Martha Stewart of the caveman diet crowd, features a chili recipe in her upcoming book Nom Nom Paleo: Let’s Go! Simple Feasts and Healthy Eats, with Henry Fong (Andrews McMeel Publishing, $35; Jan. 18). Her dish contains tomatoes but no beans as well as an ingredient that few people will associate with the dish: fish sauce.

“I’m sure I’ll hear from hardcore chili aficionados about what belongs in a bowl of chili… and what doesn’t,” she writes in the book. If you’re a chili snob who turns up your nose at a dish that that includes a controversial ingredient, “feel free to call this something else,” she writes.

Tam launched Nom Nom Paleo, which has grown into a popular website, app, and condiment line, about a decade ago, when she was working as a nightshift pharmacist. “I started it because I found paleo made me feel better and gave me energy to keep going with two young kids,” she said in a phone interview.

Her engaging cookbook plays out recipes in the style of a comic strip. Each has multiple how-to photographs taken by her husband, Fong, with speech bubble-style captions. The pages are dotted with avatars of the couple and their two children. The 140 recipes run the gamut from vegan-friendly green soup with tangy cashew cream to chicken karaage (Japanese fried chicken) and hash brown fish. Several of the recipes, like the chili below, have Instant Pot directions; over 100 are Whole30 compatible.

The book’s chili recipe is a combination of several Tam has cooked in the past, but with no paleo-unfriendly beans, and the addition of her secret ingredient. “People see fish sauce, and they say, ‘Oh, gross.’ But it adds umami and no fishiness,” she says.

Tam’s recipe reminds you of the powerful appeal of chili, both for ease of preparation and bang-for-your-buck satisfaction when it’s done. It’s a mix of straightforward ingredients (everyone should have fish sauce in their pantry): ground beef, onion, cumin, chili powder, check, check, check. The fish sauce combines with the tomato paste to make the chili’s flavor rounder and richer and a little more pungent.

The chili doesn’t need the beans. But, if like me, you’re not ride or die on the paleo diet, you can go ahead and add them. The author doesn’t mind. “I’m paleo-ish,” says Tam. “I don’t care what you do with this book. You can serve beans with the chili, serve other dishes with pasta.” The point of the cookbook, she says, “is to recognize how food affects you,”

In fact, Tam made this chili for her family’s New Years Eve dinner. It’s adaptability makes it a good option for upcoming Super Bowl parties, too. “What great about it, is that if you have people over, you can include an assortment of toppings, paleo or not: sour cream, cheese, beans. Everyone can dress up their chili the way they want to.”

In a large cast-iron casserole or Dutch oven, heat the oil over moderate heat to simmering. Add the onion, pepper, and a sprinkle of salt. Cook, stirring, until the vegetables soften, about 5 minutes. Stir in the tomato paste and garlic and cook until fragrant, about 30 seconds. Stir in the ground beef, and 1 tsp of the salt. Cook, breaking up with a spatula, until browned, 5-7 minutes. Stir in the chili powder, oregano, cumin, and cayenne.

Add the drained tomatoes, bone broth and fish sauce and stir well, so the liquid is on the bottom of the pot. Reduce the heat to medium low, cover partially and cook, stirring occasionally until the flavors are melded, about 1 hour.

Taste the chili and season to taste. Add the apple cider, if using and taste again. Serve with desired toppings.