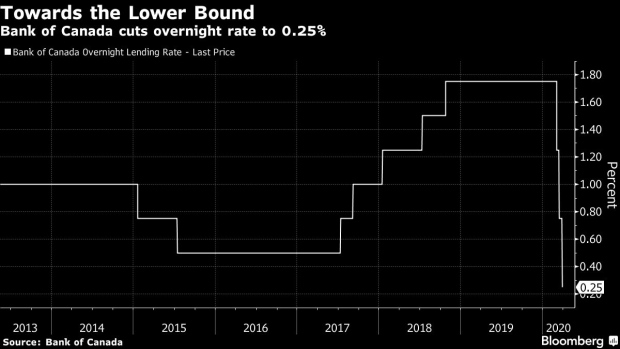 (Bloomberg) -- Canada’s policy makers unleashed the full power of the state on Friday, pledging open-ended support that could result in the largest government intervention in the economy since World War II.

In a coordinated response to an increasingly bleak outlook, Prime Minister Justin Trudeau’s government doubled its existing stimulus package, while the Bank of Canada cut interest rates to a record low and began a massive asset purchase program to flood markets with cash.

More significantly, authorities committed to providing limitless aid if needed to revive an economy that could be on track for the sharpest one-year contraction since the Great Depression. It was a dramatic escalation after weeks of incremental steps that could take the total size of new stimulus and liquidity measures to near C$1 trillion ($715 billion) by the time the crisis is over.

Canada’s economy is suffering twin shocks. The unemployment rate likely doubled in the past two weeks after the pandemic forced widespread business closures. And tanking oil prices are devastating an energy sector that once accounted for about a 10th of output, with crude so cheap companies are virtually giving it away.

Bank of Nova Scotia estimates gross domestic product will contract by 4.1% in 2020. That would be the biggest one-year contraction since 1933.

Until last week, Trudeau and Bank of Canada Governor Stephen Poloz had taken a more cautious approach than elsewhere, focusing less on massive stimulus and more on designing policies that could be scaled up if needed.

But a surge in jobless claims jolted policy makers into more forceful action.

The government’s fiscal stimulus package now totals C$202 billion, and includes direct spending to individuals along with tax deferrals, government-backed credit and wage subsidies for business. More is coming, with the next move likely to be relief measures for the oil sector and airlines.

“There’s not a cap” to stimulus measures, Finance Minister Bill Morneau told reporters at a press conference Friday. “We’re going to do whatever it takes to support people.”

The government also intends to buy as much as C$150 billion worth of mortgages, while the country’s banking regulator is loosening capital requirements to free up at least C$300 billion of lending capacity.

The Bank of Canada, which had been the only Group of Seven central bank to avoid quantitative easing after the financial crisis, has seen its balance sheet jump by C$90 billion as it cranks up asset purchases, and some economists predict that amount could triple.

“Some may suggest this is using a lot of firepower,” Poloz said Friday at a press conference in Ottawa. “But I think a firefighter has never been criticized for using too much water.”