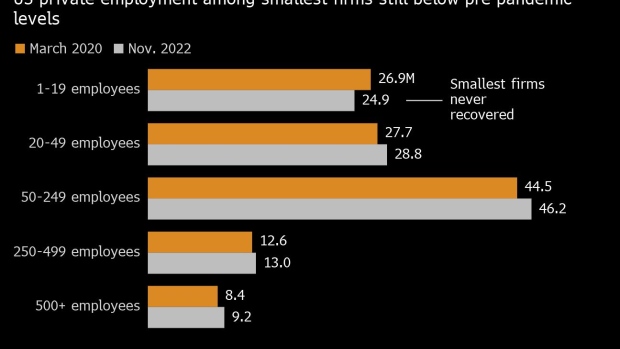 HOUSTON, TEXAS - AUGUST 16: Lynn Gooden, 44, updates inventory in her business, Mother's Hair Beauty Supply, on August 16, 2022 in Houston, Texas. "It's always talk, and the money don't never reach us. A lot of the funding from the government and organizations gets allocated to staff, it doesn't necessarily reach us. They always say they got a good message but don't market it effectively, so it's really just ear-candy. In the past, the government has said that they put out different funds for programs to help small businesses, but it was hard to find where those programs were and actually apply for them. They may have put funding out, but for us, where do we go to receive the money? Many people don't have the education and the resources to dig through and truly figure out how at access government funding. When reaching out, we get automated systems and corporations not calling you back," said Gooden. The Houston Equity Fund has established a new program that will assist minority-owned businesses with funding after it received a $20 million Wells Fargo donation to help combat racial and economic injustice. The fund was set up in response to the murder of George Floyd in 2020, and is set to allocate funds to small, minority businesses to assist with the physical and financial effects of the COVID-19 pandemic. (Photo by Brandon Bell/Getty Images) , Photographer: Brandon Bell/Getty Images North America

(Bloomberg) -- Layoffs and discharges are starting to pile up at America’s smallest firms.

Some 305,000 workers lost their jobs in October at businesses with less than 10 employees, according to data released Wednesday by the Bureau of Labor Statistics. That’s up by 137,000 from the previous month. It was the biggest change in any of the firm-size categories broken out by the BLS.

The job cuts at the smallest US businesses were the most since May 2020 when the pandemic was forcing many of them to shut down.

Now, amid signs the economy is slowing, many firms are expected to try to hold onto their workers -- since it’s been struggle to find talent since the pandemic hit. But that’s harder for the smallest firms, which lack the financial buffers to absorb blows such as weaker consumer demand or higher borrowing costs.

The total workforce employed by America’s smallest businesses has shrunk during the Covid era, according to data from ADP Research Institute in collaboration with Stanford Digital Economy Lab that was also released Wednesday.

Before the pandemic, more than 27.5 million people worked for firms with less than 20 employees. That number is now below 25 million, the latest ADP data shows. By contrast, every other category of firm by staff size has seen employment increase.