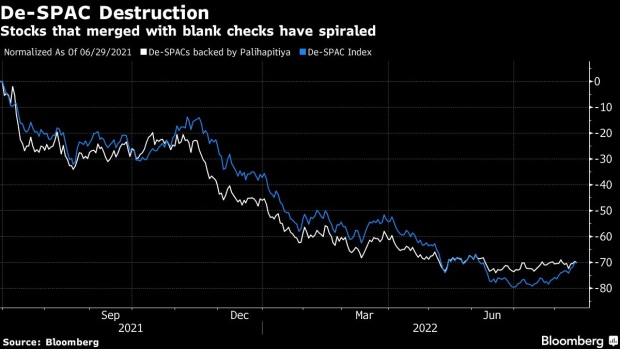 (Bloomberg) -- The news came with little fanfare. It was late on a sleepy summer afternoon last week, and few on Wall Street even seemed to notice the pair of filings when they hit the SEC website.

In terse, boilerplate language, the documents stated that two SPACs launched by Chamath Palihapitiya needed to push back the deadlines they had set to make acquisitions.

Palihapitiya was in no mood to trumpet the news. There were no tweets, no interviews, none of the braggadocio that came with so many of his big SPAC deals, back when the market was the hot new thing in finance, a sure-fire, money-minting machine, and Palihapitiya was its undisputed king.

But if those euphoric moments two years ago represented the peak of SPAC frenzy -- a phenomenon created out of the same ingredients (unprecedented monetary and fiscal stimulus) that gave us meme stocks and Dogecoin millionaires -- then these SEC filings represented something of an unofficial end to this chapter of financial mania.

One of the two blank-check companies is Palihapitiya’s biggest ever, a $1.15 billion behemoth, and pushing back its October deadline -- to some unspecified time next year -- is a major setback. Inking a deal will likely be no easier in 2023, assuming that investors in the SPAC even opt to stick around. The only bigger SPAC that had a looming deadline this year  -- Bill Ackman’s $4 billion Pershing Square Tontine Holdings -- had just pulled the plug entirely and handed the cash back to investors three weeks earlier.

SPACs, though, were only a sideshow for Ackman. For Palihapitiya, a man who has taken to calling himself the heir apparent to Warren Buffett, they represent a big chunk of his portfolio. And the collapse in their value over the past year and a half -- and, for that matter, of the value of the entire industry -- has put a dent in his net worth.

All five of his SPACs that merged with acquisition targets are now trading well below their starting price of $10. Some, like Virgin Galactic Holdings Inc., are down more than 25%. Taken from its peak price, back in February 2021, when Palihapitiya was tweeting things like “trust the process” with a screenshot of his SPAC returns, the stock is down 88%.

“The broader market obviously hasn’t been conducive to anything he’s doing,” said Matthew Tuttle, chief investment officer of Tuttle Capital Management, a Greenwich-based firm that focuses primarily on ETFs. “But I also think you’ve gotta be real careful when you’re going out and hyping stuff.”

A representative for Palihapitiya and Social Capital declined to comment.

In a post-mania world, SPACs will most likely live on as an asset class in some form or another. But a return to those go-go days seems improbable. Some SPAC watchers even argue that the market could potentially disappear entirely if the SEC moves forward with rule changes it proposed earlier this year.

The proposals would prohibit executives from making the kinds of wild claims about revenue and profit growth that have become a hallmark of the SPAC boom. And they’d effectively make going public via a SPAC as difficult as going via a traditional IPO.

“If the SEC’s rules go forward and aren’t challenged,” says Usha Rodrigues, a professor of securities law at the University of Georgia, “I don’t know if there will be future iterations of SPACs.”

Palihapitiya has plenty of company as he searches for acquisition targets. Managers of more than 600 blank-check companies that collectively hold some $174 billion in cash are facing deadlines to close deals over the next 17 months, according to data compiled by SPAC Research.

That includes SPACs launched by KKR, Bill Foley and Michael Klein. Each of them raised $1.38 billion -- the three SPACs that are bigger than Palihapitiya’s -- and each has a deadline in the first half of next year.

It’s a rough environment for closing deals. Not only has the SPAC fever broken but the economy is slowing and CEOs of private companies are cooling in general to the idea of going public. (Conventional IPOs are holding up better than SPAC-style debuts, known as de-SPACs, but they’re still down more than 50% from their peak.)

Two SPACs backed by Palihapitiya and his partner Suvretta Capital have managed carry on business in recent months. ProKidney Corp., a medical technology company, debuted in the market last month. Its shares have sunk more than 20%, though, in just a matter of weeks and more than 90% of investors opted to redeem their shares for cash. On Thursday, SPAC investors are set to vote on a pact to take public Akili Interactive, the maker of a video game that seeks to treat kids with attention-deficit disorder.

Palihapitiya has had little to say publicly about either deal. The last time, in fact, he tweeted about the SPAC industry at all was in April, when he posted a chart comparing a de-SPAC index to a basket of companies that went public through IPOs -- as a way of showing the market sell-off was broader than just the SPAC collapse.

Back at the height of the boom in early 2021, he’d fire off bursts of tweets, one after the other, about his latest SPAC exploits. Like in January, when he re-tweeted a post of the performance of the SPACs he invested in and tacked on a Jay-Z lyric for emphasis.

Only one of the six stocks mentioned in the thread is trading higher today than it did at the time.