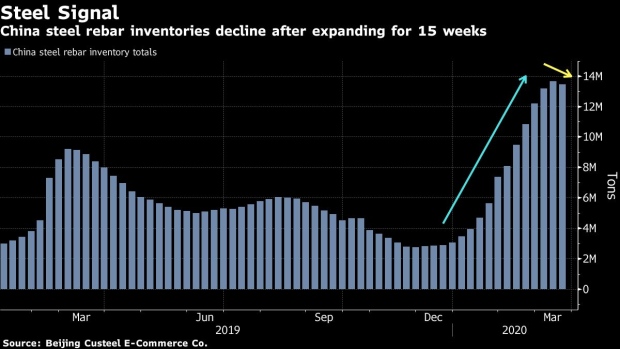 From oil to copper to coal, China’s gigantic commodities industry is signaling that the first economy to be flattened by the coronavirus is getting closer to a return to normality.

Bloomberg Economics estimates that most of China was 90%-95% back to work at the end of last week, noting pick-ups in the steel market, construction activity and crude processing. Those oil refineries, as well as coal-fired power plants, are nearing last year’s operating rates, while metals stockpiles have shrunk from record or near-record levels. It’s a three-month cycle of collapse and recovery marked by perhaps the most heartening milestone for those nations still fending off the worst of the virus: China has now reported zero new Covid-19 deaths for the first time since January.

Here’s a rundown of some key indicators of China’s commodity demand:

State-owned giants such as Sinopec are preparing to restore more capacity as the central government pushes for a recovery in industrial activity to shore up economic growth, while some idled private oil refiners, known as teapots, will resume processing in April.

China’s drivers have returned to the roads in greater numbers than this time last year as social distancing encourages more people to use their own cars instead of public transportation, according to BloombergNEF.

An exception is that drivers appear to be avoiding non-essential journeys. That’s evidenced by TomTom Traffic Index congestion data, which show a precipitous drop outside rush hour, and by highway traffic during this past weekend’s tomb-sweeping holiday. Vehicles were way down compared to last year as the government advised people to stay away from ancestral burial sites.

The daily coal burn at select coastal plants has doubled from early February and the height of the country’s lockdown to arrest the spread of Covid-19. The plants are responding to resurgent electricity demand as factories restart in the world’s second-largest economy.

At the same time, China’s buyers of liquefied natural gas have become some of the most active in the market, signaling a turnaround from February, when the country’s top importers sought to delay or cancel shipments due to demand and logistical constraints caused by the outbreak.

The increase is mainly from smaller utilities, which are trying to take advantage of cheap gas while their bigger counterparts struggle to consume all of their contracted supply, said BNEF analyst Lujia Cao. Asia’s benchmark LNG price, the Japan/Korea Marker, fell last week to a record as the impact of the coronavirus worsened demand in other parts of the world.

The Chinese copper market is showing signs of recovery, which is a helpful indicator for the broader economy thanks to its usage in construction and power transmission. Stockpiles monitored by the Shanghai Futures Exchange have fallen for a third week from a near-record, while London Metal Exchange inventories have eased, too.

Zinc and aluminum holdings have also receded. Still, base metals prices face an escalating threat from the worldwide collapse in demand as the virus outbreak forces global manufacturing into shutdown.

China’s inventory of steel reinforcement bar is also in decline after ballooning to an all-time high due to the prolonged hiatus in construction activity.

Stockpiles had surged as steel mills struggled to dispatch their products amid logistical and transport constraints. Still, analysts warn that, despite the drop, inventories are still at elevated levels and steelmakers are facing tight margins.

Soybean processors in China have been running up against supply constraints since March due to virus-related disruptions to imports, with weekly crushing volumes at 1.4 million to 1.5 million tons, according to traders. That should rebound to about 1.8 million tons in the second half of this month as more beans arrive from overseas, the traders said, declining to be named because they aren’t authorized to speak publicly.