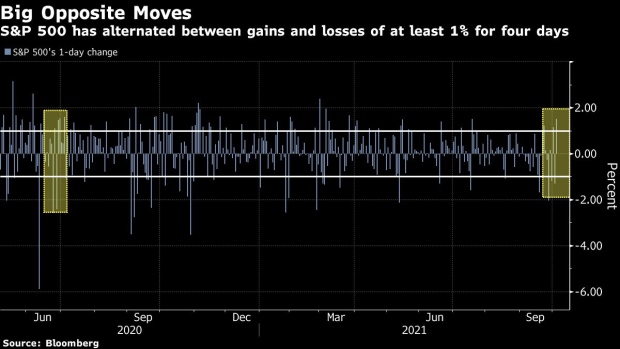 Pedestrians are reflected in a window of the Nasdaq MarketSite in the Times Square neighborhood of New York, U.S., on Monday, April 8, 2019. U.S. stocks pared losses as investors awaited signs of progress in the trade war with China ahead of the latest corporate earnings season. Photographer: Michael Nagle/Bloomberg , Bloomberg

(Bloomberg) -- Pick a direction, and don’t go with it.

That’s the story in stocks of late, with the S&P 500 alternating between gains and losses of at least 1% for four straight sessions -- the longest stretch since June 2020. It’s the same in fixed income, with 10-year Treasury yields swinging wildly around 1.5%.

The harrowing reversals reflect a particularly stark divide between bull and bear cases in markets right now. On one side, risk appetites are being constricted by lingering uncertainty over the government debt ceiling, tightening Federal Reserve policy and disrupted supply chains. At the same time, sentiment is being buttressed by improving Covid trends, an economy that keeps chugging along and forecasts for more double-digit earnings growth from corporate America.

“The story line has become mixed,” said Bob Doll, chief investment officer at Crossmark Global Investments. “When you get legitimate lists on both sides of the ledger, you tend to get more volatility.”

Stocks advanced Tuesday, with the S&P 500 climbing 1.1%, as a gauge of the U.S. services sector activity beat economists’ forecast before a key payroll report Friday. The equity gain came one day after a tech selloff sparked a drop of similar magnitude in the index.

The pickup in volatility in both directions marked a departure from the third quarter, when the market mostly stayed eerily clam. The S&P 500 spent 42 days through mid-September without gains of more than 1%, the longest drought of big up days since January 2020.

While wild price swings may offer better opportunities for stock pickers, the resolve of dip buyers is facing the biggest test in a year after the S&P 500’s worst monthly drop since the pandemic bottom in March 2020. For now, investors of exchange-traded funds have not come back in any big way and retail traders have stayed leery.

“I wouldn’t buy here. I think there’s still more downside, especially to these very expensive parts of the market,” said Megan Horneman, director of portfolio strategy at Verdence Capital Advisors. “I don’t think these expensive growth sectors are pricing in higher interest rates or inflation sticking around for longer than anticipated, as well as the potential for corporate tax hikes.”

Despite Tuesday’s bounce, the S&P 500 stayed below its 100-day average, a key support during this bull market. It also has yet to clear the resistance point near 4,385, which rejected the index’s breakout attempts last week and back in July.

With the market stuck with heightened volatility, options traders appeared to be reluctant to pay up for downside protection on the S&P 500, a sign that according to RBC Capital Markets the worst of the rout may be over.

Similarly, while the Nasdaq 100 made a fresh low this week, the Cboe NDX Volatility Index -- a gauge that tracks the cost of options tied to the tech-heavy gauge -- produced a lower high. That bullish divergence, along with a slide in the Nasdaq 100’s relative strength index, suggests the monthlong rout is due for a pause, according to Jonathan Krinsky, chief market technician at Bay Crest Partners.

“Even if we don’t get back to new highs, the next meaningful move looks to be higher to us,” Krinsky wrote in a client note.

To Wells Fargo & Co. strategist Chris Harvey, the current bout of market volatility was partly driven by investors reallocating assets in anticipation of a potential shift in the monetary policy and global growth outlook.

“We’re in a period of transition. Some of things that worked in the last several months are no longer working,” Harvey said. “Earnings are going to start in earnest relatively shortly, but until then the macro takes over.”