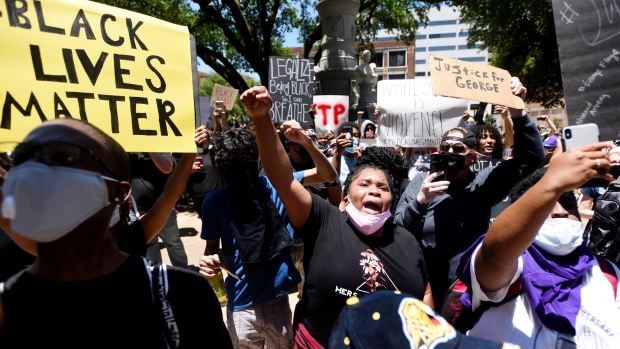 One way that activists in the Black Lives Matter demonstrations have encouraged their fellow Americans to educate themselves and their children about the Black experience is to purchase books from these Black-focused and -owned bookstores.

They remain a crucial presence in the communities they serve, as well as a lifeline for the authors they support. Though many have been closed due to the coronavirus, their books remain available for purchase online.

“At a time like this,” says Mijha Godfrey, co-owner of Jambo Books, “it’s especially vital for everyone to support these bookstores because relationships are going to be essential for bridging the gaps in communication and understanding between people of different racial backgrounds. Great relationships can be fomented in bookstores through clubs and spontaneous conversations with people connecting over a shared love of reading.”

For the past three weeks, Bloomberg has been reaching out to Black-owned independent bookstore owners across the United States to ask their owners if they would provide a recommendation for one (relatively) new book that excites them and for a favorite classic title. Here’s their list.

Jeannine Cook, owner of Harriett’s Bookshop in Philadelphia, recommends Such A Fun Age by Kiley Reid.

The story of a 25-year-old Black babysitter for a White family “addresses the intersections of race and class, motherhood, activism, racial profiling, labor, and law,” says Cook. “And it was written by a Black woman from Fishtown, where our bookshop is located.”

Her personal favorite is Beloved by Toni Morrison. “I read it at 19. I was a young pregnant sophomore in college, and the idea of a mother choosing to kill her child rather than have it experience slavery was jarring and scary and powerful. It was written by a literary genius who reminds us that ‘We are our own best thing.’”

DeShanta Hairston, the owner of Books and Crannies in Martinsville, Va., says The Children of Blood and Bone by Toni Adeyemi is “like Harry Potter in Africa, which is amazing in itself. It focuses on racial divide and how history shapes our beliefs and continues to repeat itself throughout generations.

The second in the series, Children of Virtue and Vengeance, was released in December.”

Her own favorite is Their Eyes Were Watching God by Zora Neale Hurston. “Having read this book at a young age, it was beautiful witnessing this strong, independent, unapologetic Black woman in a time where it was meant for us to present ourselves a certain way,” she says. “Janie Crawford was everything Black women are not supposed to be.”

Mijha Godfrey is the co-owner of Jambo Books, a subscription service that, every month, sends two books that feature a child of color as the star. For those in the 5- to 9-year-old range, she recommends Rocket Says Look Up! by Nathan Bryon and Dapo Adeola. “A meteor shower is coming,” she says of the book’s plot, “and Rocket wages a one-girl war against a world with its nose stuck in its phones, so her family and neighbors can witness a meteor shower and experience the thrill of watching the heavens put on a display.” It allows her, Godfrey says, “to be transported from the minutiae of our daily existence into something transcendental.”

Instead of focusing on just one author, Godfrey recommends the classic collection Black Voices: An Anthology of African American Literature. She describes it as “a broad overview of Black American literature that provides a window into the souls of the people who struggled for freedom, from America’s inception through the Civil Rights Movement.”

Janifer Wilson, the founder and president of Sister’s Uptown Bookstore in Manhattan, suggests Conversations in Black: On Power, Politics, and Leadership, which features contributions from the likes of Stacey Abrams and Harry Belafonte, Eric Holder and Michael “Killer Mike” Render.

“Conversations in Black brings together prominent voices in Black America to address many of the topics we face today,” says Wilson, “including one central question: What should the future of black leadership look like? And just as important, it offers a compelling road map for the future of Black excellence.”

DuBois’ concepts of life behind ‘the invisible veil of race’ and the result of ‘double-consciousness’—the sense of always ‘looking at oneself through the eyes of others’—are still pertinent today—and, we believe, essential to understanding the plights of the Black community.”

A new release that Monique S. Hall, co-owner of Book Boutique in Lithonia, Ga., recommends is dear to her heart for a good reason: She wrote it. Blind Justice, she says, “is a book relevant for this time period and concentrates on racial tension.

By the end of the novel, I am hoping that it answers some of the questions I find myself asking, ‘Why do we hate each other so much?’ and ‘What really is blind justice?’”

Her ultimate favorite is Coldest Winter Ever, by Sister Souljah. “It is a timeless piece in the urban genre that keeps you on your toes.”

Willa Robinson, owner of Willa’s Books & Vinyl Galore in Kansas City, gave succinct reasons for her choices. In Between the World and Me, by Ta-Nehisi Coates, she says, “I learned that fear keeps our boys from being all they could be.”

Barely a dozen years old, Slavery by Another Name by Douglas Blackmon is already a modern-day classic. “This book answered a question I had for a long time,” Robinson says.

Lorielle J. Hollaway, owner of Cultured Books in St. Petersburg, Fla., gives a shout-out to The Last, Last Day of Summer by Lamar Giles. “It’s such a fun read,” Hollaway says. “It’s been requested for the second summer in a row. There’s action, adventure, and a time machine. Otto and Sheed’s adventures take the reader inside a journey that they’ll wish would never end.”

For her classic pick, Hollaway recommends You Matter by Christian Robinson. “It’s a great book for bonding and nurturing inclusion. With all the chaos going on in the world—from pandemic to civil unrest—it’s important to make time and show the little people in your life: They matter.”