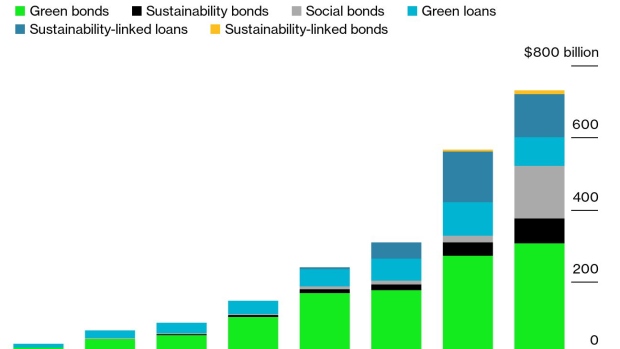 Wind turbines at a wind farm during sunset in Nauen Brandenburg, Germany, on Wednesday, Dec. 30, 2020. It was a pivotal year in the transition toward renewable energy, underpinned by massive government spending pledges and corporations working to burnish their environmental, social and governance credentials. Photographer: Liesa Johannssen-Koppitz/Bloomberg , Bloomberg

Another year, another record for the sustainable debt market. Companies and governments raised nearly three-quarters of a trillion dollars of sustainable debt in 2020, beating the previous record, set a year earlier, by more than $160 billion.

A half-decade ago, the notion of sustainable debt hardly existed, in the sense that investor focus was almost entirely on one instrument: activity-based green bonds. An activity-based bond is what a company or government sells to raise funds for a specific project, mostly building renewable energy assets. This is only useful for the small number of entities that would need to fund such a project, however, meaning the market was inherently limited.

By 2020,  sustainable debt was a much broader asset class, with an entire set of new bonds and loans based on behavior, i.e. those used to finance the pursuit of broad sustainability goals. (For more on this distinction, see this piece I wrote last year.)

As ever, a topline growth rate—especially the eight-year 61% compound growth rate that sustainable debt boasts—can obscure trends in sub-sectors, so let’s unpack those a bit. The sustainable bond market, on the one hand, was an unadulterated growth machine; on the other hand, sustainable loans were a mixed bag.

Last year, more than $300 billion of green bonds were issued. That’s only a 13% increase from 2019, but green bonds are a relatively mature market, and this (relatively) mature growth rate isn’t surprising. Sustainability-linked bonds, the smallest subset of last year’s issuance, grew 100%, to $11 billion. That leaves sustainability bonds, which nearly doubled to $69 billion.

Social bonds can thank Covid-19, if anything, for their exceptional year. Governments and supranational bodies such as the European Union and the African Development Bank issued almost all of 2020’s social bonds to fund pandemic healthcare and relief efforts. These were attractive not only because of the way the proceeds were going to be used, but also for their high credit ratings. The EU’s first social bond, issued in October, was 14 times oversubscribed. As I argued at the time, though, that level of sustainable debt enthusiasm probably isn’t sustainable for a number of reasons.

What’s next? Probably more issuance of everything thanks to continued pandemic relief efforts, new commitments to emissions reductions and environmental preservation, and continued demand. As last year showed, this rising debt tide may not raise every boat equally, but that’s not a bad thing. A healthy and sustainable debt market should see investors differentiating their enthusiasm for different instruments, different markets, different creditworthiness, and different use of proceeds.

Another thing to expect, as the market matures, is more scrutiny of the specific sustainable credentials of each debt product, along with greater transparency from issuers. This, again, is a good thing and a sign of maturity.

In its look-ahead this time last year, BNEF predicted that total cumulative debt issuance since the market’s inception would pass $2 trillion in 2020, and perhaps hit $3 trillion by the end of 2021. After totting all of last year’s activity, we start 2021 already a third of the way to a third trillion. Watch closely to see how quickly that next trillion approaches, where, and with what types of sustainable debt favored.