The Tesla of plant-based meal boxes has arrived - BNN Bloomberg
{{ currentBoardShortName }}
Markets
As of: {{timeStamp.date}}
{{timeStamp.time}} 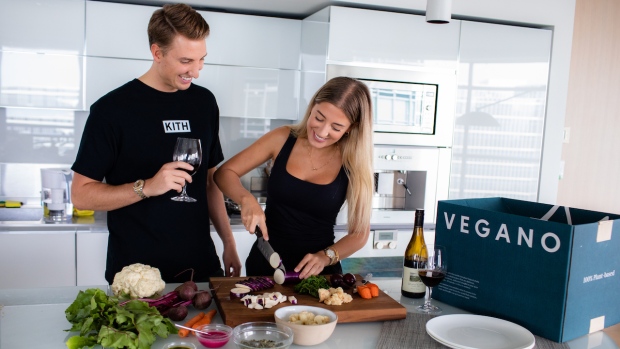 Vegano makes it easy to prepare for your upcoming week with perfectly portioned weekly deliveries.

The popularity of plant-based foods is at an all-time high worldwide and, for that, you can at least partially credit — surprise — the COVID-19 pandemic.

With more time to cook and to research healthier diet options because we’ve spent less time commuting or socializing in groups due to safety concerns, people started expanding their culinary horizons beyond meat and potatoes.

One survey of 2,000 Americans, for instance, found that more than half of respondents started eating more vegetables and fruit during the pandemic; more than 40 per cent ate less meat; and about a quarter either reduced or cut down their dairy intake. Another survey estimated about 12 per cent of Canadians classify their diet as either vegan or vegetarian.

“We took a lot of the thinking out of cooking plant-based meals and made it a fun exercise.” — Conor Power, CEO, Vegano Foods Inc.

Meanwhile, an increasing number of people around the world are not abandoning meat altogether but are looking for ways to eat less meat and more plant-based foods for reasons related to personal health and the impact of animal farming on the environment.

And these “flexitarians” have discovered what both vegans and vegetarians have long known: you don’t have to sacrifice flavour when you go plant-based.

For Vancouver, B.C.-based Vegano Foods (CSE: VAGN), all these trends — coupled with the boom in demand for meal delivery services such as HelloFresh both before and during the pandemic — are pointing in the right direction.

Vegano is a new kid on the block and growing rapidly. Headed by CEO, Conor Power, and launched in March 2020 just as the widespread effects of COVID-19 were hitting North American shores, the company set out to provide Canada’s first 100 per cent plant-based meal-kit delivery service.

That soft launch was a sort of crowdfunding endeavour to test the demand in the market for such products, Power says, and results were phenomenal: in May 2020, in the first eight days and with a menu of 12 meals — boxes were delivered weekly and there were one-, two- and three-month options — Vegano had sold $271,000 worth of product.

In July 2020, just two months later, Vegano leased a 5,000-square foot facility in Richmond, B.C. in which to produce its kits. So far, it has delivered more than 7,000 kits and is well-positioned in the industry, which is expected to hit $20 billion by 2027.

In response to the tremendous feedback from its customers, the company revamped its meal kits and turned them into meal boxes. This shift in their business model results in less waste in its facilities, further supporting the company’s zero-waste initiative. It also eliminates the entire process of cooking – that’s right, no cooking, cutting, or cleaning is required.

“We were blown away with the reception and the market,” he says, noting the feedback from consumers looking for vegan options was that they wanted “the Tesla of meal-boxes” and Vegano was the one to deliver on this demand.

The consumer goes to Vegano’s menu and chooses a meal — options at the time of this writing included the Creamy Coconut Green Curry, Vietnamese Zoodle Salad, Squash Masala Bowl (one of several gluten-free options) and the Jalapeno Guacamole Rice Bowl.

They can then choose their meal plan for two or four people, with each box providing three meals per week.

These meals are packaged in insulated boxes and are delivered either Sunday or Monday, depending on where the purchaser lives. (Vegano currently delivers throughout Metro Vancouver as well as the Sea-to-Sky corridor and Vancouver Island, with plans to expand services to Toronto, Montreal and Los Angeles within this year).

Upon delivery, this vegan, gourmet meal box will be available for consumption at any time. The best part of this is that all the thinking has been done for the customer, they just need to heat, eat, and enjoy the delicious food.

In addition to introducing new eating styles to its flexitarian customers, the company allows experienced plant-based eaters to get inspired by new meal ideas by taking most of the guesswork out of meal planning.

Vegano is not stopping with plant-based meal boxes. It has already expanded by launching in May 2021 an online marketplace selling hundreds of products, from Made Good’s crispy light granola, Loop’s fresh fruit and vegetable drinks to Gusta’s brand of vegan sausages. This marketplace features over 500 products from notable plant-based brands such as Bob’s Red Mill, Earth’s Own and the Very Good Butchers.

Since its launch in January 2021, the company experienced a 150 per cent growth in sales and has delivered nearly 5,000 meals across Metro Vancouver, Squamish, and Whistler within the same summer.

The Vegano marketplace combines the product selection of a boutique vegan grocer with a seamless e-commerce shopping experience, and the company is looking to expand its selection with the aim of hitting 2,000 SKUs.

“Numerous companies reach out to us to have us host their products on our marketplace,” Power says, noting that for marketplace products, Vegano uses outside logistics companies and just-in-time delivery, so it doesn’t hold inventory.

Future growth plans as early as August 2021 include additions to Vegano’s product line such as soups, sauces, and greens mixes. The company also increased the number of products in its marketplace to 10,000 by the end of last year, allowing customers to discover even more exciting vegan food options.

Vegano is rapidly expanding its horizons

Just as Power has big plans for Vegano’s product offerings, the company has big goals for its future, which could include acquiring other plant-based food businesses. Among these was the plan to take Vegano public on the Canadian Securities Exchange, which was executed on February 15, 2022.

The company has already enjoyed substantial backing, including $4.2 million in a Series A funding round in March 2021 that was more than double its target. The funds are being used to scale the company, with a focus on marketing strategy, growing its marketplace and CPG offering, and accelerating product development.

Power says, “My hope is that we’re able to offer a strong investment vehicle for people who believe in the plant-based sector, who want to come along for the journey. And we’re looking to grow.”

"The financial support will help us scale and execute our vision rapidly. We’re excited for what’s to come."

Vegano’s vision, in an organic nutshell, is to make vegan food more accessible to everyday consumers, whether they are vegan, vegetarian, or meat-eating flexitarians, and to help every Canadian adopt a plant-based lifestyle, even if it’s just one day a week.

To learn more about Vegano, visit their website here.

Follow Vegano on social media for the latest news: