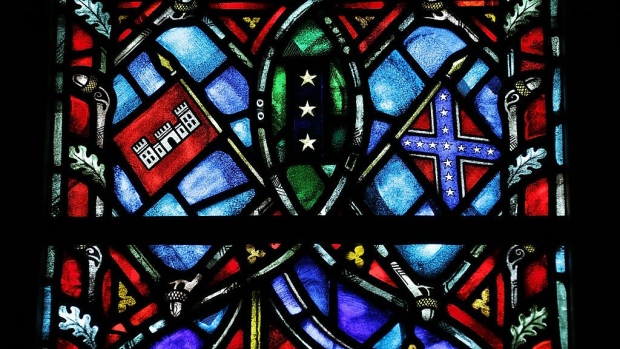 WASHINGTON, DC - JUNE 29: A stained-glass window honoring Robert E. Lee, commander of the Confederate Army of Northern Virginia in the American Civil War, installed at the Washington Cathedral is seen June 29, 2015 in Washington, DC. The dean of the National Cathedral has called to remove the two windows with images of the Confederate flag in the Cathedral. (Photo by Alex Wong/Getty Images) , Photographer: Alex Wong/Getty Images North America

(Bloomberg Opinion) -- Robert P. Jones is founder and CEO of the Public Religion Research Institute and author of the new book, “White Too Long: The Legacy of White Supremacy in American Christianity.” Jones, who was raised a Southern Baptist in Mississippi, has a divinity degree from Southwestern Baptist Theological Seminary and a doctorate in religion from Emory University. His book is a powerfully detailed history, not a polemic. I interviewed him, via email, last week. A lightly edited transcript follows.

Wilkinson: “Racism” is a popular subject right now. You use a term — in the book’s title and throughout the text — that has sharper edges and fewer ambiguities: “white supremacy.” That’s a phrase Americans typically associate with the Ku Klux Klan or other fringe groups. Yet how “fringe” is white supremacy to American culture?

Jones: Properly understood, white supremacy is not fringe at all but actually has framed the entire American story. For most white Americans, the term primarily evokes white sheets and burning crosses — extremist images, mostly from a bygone era. But white supremacy is not just, or even fundamentally, about individual acts of racial terrorism. Its more powerful expressions are built, over generations, into the way society is organized: which neighborhoods were open, which jobs were available, what political power was allowed, and what laws were applied to whom.

If we reexamine the plain meaning of the phrase, its continued relevance comes into view. Even rearranging the words — from “white supremacy” to “supremacy of whites” — gets us to a clearer meaning: the belief that white people’s superior nature and divinely favored status entitles them to hold positions of power over Black and other nonwhite people.

A dizzying array of resources across multiple fields of human inquiry has been deployed to defend this belief. By far, the strongest were theological arguments that presented white supremacy as divine mandate. Particular readings of the Bible provided the scaffolding for these arguments. Black Americans, for example, were cast as descendants of Cain, whom the book of Genesis describes as physically marked by God after killing his brother, Abel, and then lying to God about the crime. In the white Christian version of this narrative, the original ancestor was a Black criminal, and modern-day dark-skinned people continue to bear the physical mark of this ancient transgression. This story implied that Blacks likely inherited both their purported ancestor’s physical distinctiveness and his inferior moral character. These teachings persisted in many white Christian circles well into the 20th century.

Wilkinson: White supremacy is pervasive in U.S. history, politics and culture. Why did you focus on its dominion in American Christianity?

Jones: Even amid our current moment of reckoning and enlivened consciences around issues of racial justice, the role that white Christianity has played in granting moral legitimacy to white supremacy has largely escaped scrutiny. Much of the recorded history of slavery, segregation, and racism gives scant treatment to the integral, active role that white Christian leaders, institutions, and laypeople played in constructing, maintaining and protecting white supremacy in their communities. Even historians critical of racism and segregation often depicted white Christians as being merely complacent. They were guilty of committing sins of omission by ignoring the post-Civil War turmoil of Reconstruction, Redemption, Jim Crow and the civil rights struggles of the 1950s and beyond. Even those who went further accused white churches only of complicity, of being unwitting captives of the prevailing segregationist culture.

Both treatments are essentially protectionist, depicting the struggle over Black equality as external to churches and Christian theology. But many white church members and leaders aggressively defended segregation both inside and outside of their sanctuaries.

At a pragmatic level, white churches served as connective tissue that brought together leaders from other social realms to coordinate a campaign of massive resistance to Black demands for equality. At a deeper level, white churches were the institutions of ultimate legitimization, where white supremacy was divinely justified via a carefully cultivated Christian theology. White Christian churches composed the cultural score that made white supremacy sing.

Wilkinson: One thing I learned from your book is how deeply the “Confederate Trinity” of Jefferson Davis, Stonewall Jackson and Robert E. Lee pervaded white Christianity. How did the Lost Cause become an explicitly white Christian cause?

Jones: The Confederacy was, from the beginning, a cause tied up with white Christianity, which conferred on it divine blessing and moral legitimacy. For example, Rev. Basil Manly Sr., a prominent Baptist leader, served as chaplain to the Alabama secessionist convention and offered the public prayer at Jefferson Davis’ inauguration as president of the Confederacy. Standing next to Davis, Manly implored God to “let thy special blessing rest on the engagements and issues of this day.” He asked for special blessings on the Congress of the Confederate States and especially on Davis as a divine servant whose acts might be “done in thy fear, under thy guidance, with a single eye to thy glory; and crown them all with thy approbation and blessing.”

After the Civil War, Manly and others shifted tactics to promote a “Lost Cause” theology, which held that, despite military defeat, the divine vision of a white supremacist society would be restored. Over time, Davis, Jackson and Lee evolved into Confederate Christian saints who were treated as religious icons. In addition to creating public monuments glorifying them, groups such as the United Daughters of the Confederacy, and many upper-class southern whites, incorporated images of this Confederate trinity into sacred spaces, principally through stained glass installations in churches and other public buildings. (Until 2017, there were stained-glass panels depicting Jackson and Lee in Washington’s National Cathedral. The Cathedral removed two images of Confederate battle flags only the year before.)

Davis functioned as a Christian martyr, whose treatment, especially his imprisonment, after the war symbolized the South’s broader mistreatment and humiliation. Stonewall Jackson represented a stern Old Testament prophet-warrior. In the face of an emasculating defeat, Jackson’s image evoked courage, valor and an unflinching sense of the righteousness of the cause. These images were installed in numerous churches and depicted on massive monuments like the frieze carved into Georgia’s Stone Mountain, which is larger than Mount Rushmore.

Through the medium of sacred art, displaying their images alongside — or even as — Jesus, the New Testament apostles, and the Old Testament biblical patriarchs, Lost Cause supporters elevated Davis, Jackson and Lee above history into Christian sainthood. At the same time, they cast the white South as God’s chosen people.

Wilkinson: Yet your book shows that white supremacy is not exclusive to the South or to white Protestants.

Jones:  That’s correct, and this insight is critical for understanding our current situation. In addition to the historical material in the book and my own personal story as a white Christian who grew up as a Southern Baptist in Mississippi, the book draws on a range of contemporary public opinion data. In question after question, survey after survey, white Christians of all kinds — not just evangelicals in the South but also mainline Protestants in the Midwest and Catholics in the Northeast — are significantly more likely than religiously unaffiliated whites to hold racist attitudes. For example, white Christians are nearly twice as likely as religiously unaffiliated whites to say killings of unarmed black men by police are isolated incidents rather than part of a pattern of how police treat African Americans. And white Christians are at least 30 percentage points more likely than religiously unaffiliated whites to say the Confederate flag is more a symbol of southern pride than a symbol of racism.

Overall, even when controlling for a range of demographic characteristics, public opinion data reveal a positive, independent relationship between holding racist attitudes and white Christian identity. Looked at from the other direction, being affiliated with a white Christian group — whether evangelical Protestant, mainline Protestant, or Catholic — is independently associated with an approximately 10% increase in racist attitudes. By contrast, there is no significant relationship between white religiously unaffiliated identity and holding racist attitudes.

Wilkinson: As you said, this story is personal for you, as well. You were raised a devout Southern Baptist and attended seminary. Our politics suggest that millions of white Christians are a long way from making the kind of intellectual and moral journey you made to write this book. At the same time, we see widespread protest while Confederate iconography is being discarded everywhere. Something is stirring. Is white supremacy’s long reign threatened?

Jones: The conscience of the country is stirring. When I walked the 14 blocks of Richmond’s Monument Avenue last July while conducting research for the book, I passed no fewer than five massive monuments to Confederate leaders. Erected between 1890 and 1919, they were placed within large traffic circles that periodically slow and bend the flow of traffic around these saints of southern secession.

Remarkably, after standing for more than a century, the bronze statues at the center of four of the five monuments were taken down over the course of four weeks. The fifth and earliest monument, dedicated to Robert E. Lee, is slated for removal. In my home state of Mississippi, the Mississippi Baptist Convention (the state organization connected with the Southern Baptist Convention) proactively called on the governor and the state legislature to remove the Confederate battle flag from the state banner. NASCAR, Walmart, and SEC football have banned the display of the Confederate flag on their properties and at events. I did not imagine that such events would occur between last fall when I completed the book manuscript and last week when it was published. So I’m hopeful that the current context will provide an opportunity for soul-searching among white Christians. But to be authentic, we’ll need to move beyond the removal of monuments to white supremacy to dismantling the theology and the worldview that supported their installation in the first place.