Canada’s stock market is on pace for its biggest gain in a decade. But 2020 may be the year it stands above the pack.

Despite an 18 per cent climb so far in 2019 with 15 fresh records and US$408 billion in market value added, the S&P/TSX Composite Index is in the middle of the pack compared with top-performing stock markets. Its American counterpart, the S&P 500, has risen 25 per cent in a bull market that everyone thought was living on borrowed time. Even stocks in resource-heavy Australia and New Zealand have done better.

Strategists are now calling for a stronger move up north in 2020 compared with its southern neighbor. The Canadian benchmark will end 2020 at around 18,100, according to the average of estimates compiled by Bloomberg. That’s 6.8 per cent ahead of the close Wednesday but still better than the 4.7 per cent increase analysts are predicting for the S&P 500 Index next year.

“It has been years since the S&P/TSX has beaten its peer to the south,” said Ian de Verteuil, an analyst at CIBC. “We forecast better returns for Canada in 2020 - granted modestly better but better nonetheless,” he said in a report published Tuesday, citing cheaper valuations and bigger buybacks among reasons. 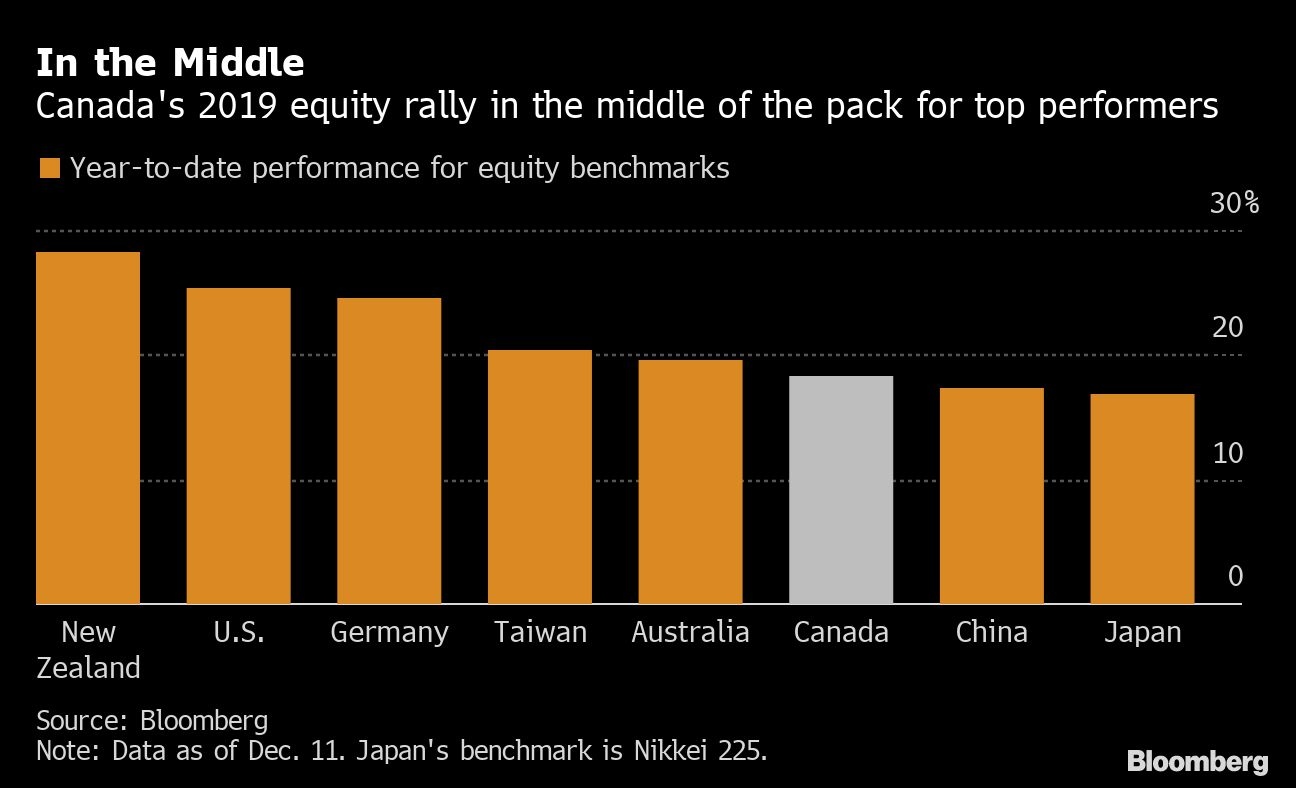 With only a small weighting of tech firms on the S&P/TSX, Canada’s surge was held back as investors spent most of this year focused on momentum trades that zeroed in on growth stocks. But, with central banks around the world cutting interest rates, fiscal stimulus in other countries could make for a revival of value stocks in the coming year.

Energy, materials and financials make up about 60 per cent of the key stock gauge. Traders are also expecting about a one-third chance of a 25 basis point cut from the Bank of Canada in first half of the year, according to swaps trading.

For Hugo Ste-Marie, analyst at Bank of Nova Scotia, the broad monetary policy easing experienced globally in 2019 will bear fruit in 2020 as it works with a lag. Expect to see healthier purchasing manager indexes around the world, he said his year-ahead report.

It’s “time for resources to rebound” in Canada, Canaccord Genuity strategist Martin Roberge said, citing the TSX as a laggard to the S&P 500 Index amid a tech stock rally. Should visibility on global growth improve, investors will return to resource equities, he said.

Bank of Montreal’s Brian Belski is cautiously optimistic. “We continue to believe energy is the most likely area to experience its traditional ‘ebbs and flows’ in 2020,” he said in a report published Wednesday. The sector has “historically has produced solid rebounds after three years of underperformance.”

Fiera Capital portfolio manager Candice Bangsund is bullish. “We’re overweight Canadian stocks going into the new year,” she said in an interview on BNN Bloomberg. “The global economy is becoming increasingly self sustaining. This should bode well for a rotation from the growth sectors of the market that have run the leader board for the last several years towards more underappreciated value sectors, which is inherently positive for the TSX.”

Financials, which make up a third of the index and have underperformed the broader index this year, could also make a comeback after a tough quarter that saw three of Canada’s six-biggest banks miss expectations.

“Perpetual pessimism” has kept valuations attractive, BMO’s Belski said. Dividend growth is expected to slow but earnings growth remains stable and in a “healthy 5-10 per cent range,” he said.

“The financial story is a big part of our preference for Canada over the U.S. as well. The earnings results were fairly uninspiring to say the least,” Bangsund said. “Going forward we expect yield curves to steepen so this should improve the profitability of the banks.”

The biggest wildcard to a continued equity rally is the U.S.-China trade war. While tensions have eased, all eyes will be on whether actual progress will be made.

“Admittedly, the trade situation is highly unpredictable. However, we believe the most likely scenario is for some sort of de-escalation,” Ste-Marie said.

--With assistance from Aury Cifuentes, Aoyon Ashraf and Kristine Owram.