Realtor Adil Dinani has a front-row seat to the cracks starting to show in one of the world’s hottest markets. A month ago, bidding wars between as many as 20 potential buyers were common for his listings in Vancouver. Now, occasionally only a single offer turns up — some people are even feeling bold enough to haggle.

“The top is off,” Dinani said of Canada’s record housing boom. He estimates the frenzy hit its peak sometime in February.

Realtors and economists alike see a shifting tide after Canada’s home prices surged by more than 50 per cent over the past two years. Higher mortgage rates are pulling down purchasing power just as politicians are piling on measures to rein in the market. Although these changes have yet to show up in aggregate price data, which continue to rise, industry veterans are saying things may have finally reached a tipping point.

“We could see some outright price declines,” said Robert Hogue, a senior economist at Royal Bank of Canada. He says markets like Toronto and Vancouver, the country's two most-expensive cities, could post “single-digit declines” in the second half of the year.

While forecasting a crash in the Canadian real estate market has been a futile game for much of the last three decades, there is precedent for at least a temporary dip. About five years ago, prices in both Toronto and Vancouver declined when government policies to slow the market coincided with the central bank raising interest rates. That mirrors what’s happening now and could point to another potential slowdown.

Canada may also be offering a glimpse of the future to the rest of the world.

The same forces that fueled the nation’s pandemic housing boom — record low interest rates and a demand for larger living spaces — have done the same thing in the U.S. and many developed countries. What makes Canada unique is the ratio of home prices to incomes is stretched, after rising at a quicker pace than other markets. That may make it the first place where the global shift towards higher interest rates starts to bite.

With inflation running at a 30-year high, Canada’s central bank is expected to raise its benchmark interest rate from 0.5 per cent to 1 per cent at its policy meeting Wednesday. And the market is expecting as many as six more hikes this year. 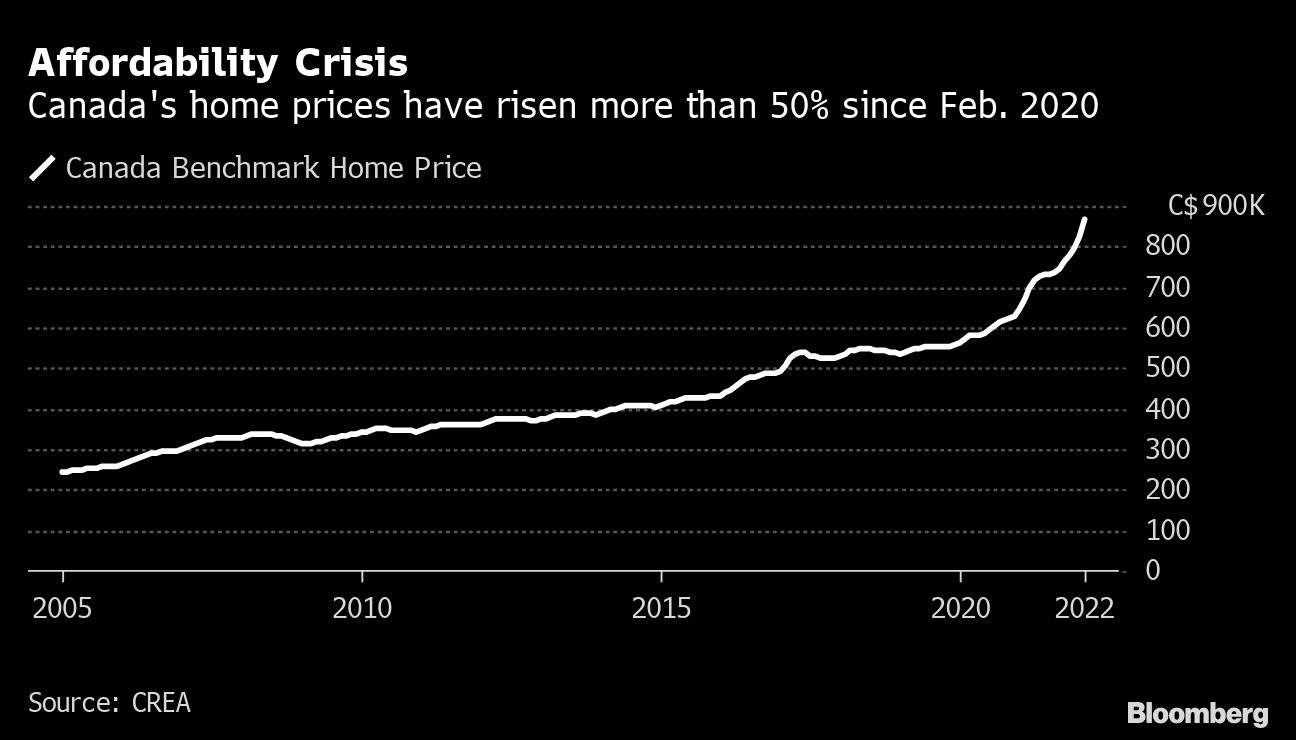 Rate increases of that magnitude would cut buyers’ purchasing power by as much as a quarter, said Stephen Brown, an economist with Capital Economics. There simply may not be enough people who can afford the current prices at a higher cost of financing, he said.

When interest rates rise, “the price to clear the market suddenly needs to drop back to what a median household can afford,” he said. “That’s where we have potential for what I’d describe as almost like an air pocket — where prices have surged so much, there’s potential for them to gap down to find where buyers are able to come in.”

For now, instances of outright price declines haven’t been common enough yet to slow the market’s overall momentum. The benchmark home price in Toronto still rose in March, albeit at its slowest pace in six months. And the same went for Vancouver and Montreal.

That may not last much longer. The Montreal real estate association titled its latest release of monthly sales and price data: “The Final Surge.” And the shifting balance of market power is starting to show up in more subtle indicators, like the ratio of sales to new listings. While the measure is still in sellers’ favor, it’s starting to inch the other way. That’s all coming before the country’s traditional spring home-buying season, the typical peak.

The government is putting on pressure of its own. Prime Minister Justin Trudeau made housing affordability the centerpiece of his government’s budget last week. He’s promising various measures to squeeze out the investors that have come to account for about a fifth of the market, along with longer-term efforts to double the rate of home construction.

“The spring market happened in February this year,” said Tom Storey, a broker who works in Toronto. “You’re not seeing every house that sells on the street, or every condo that sells in a building, sell for more than the last comparable. You’re starting to see some sell under.”

Reza Sabour, a mortgage broker in Vancouver, says buyers have already seen their purchasing power drop about 10 per cent over the past month or so.

“There’s definitely going to be shock waves if rates continue like this,” he said.