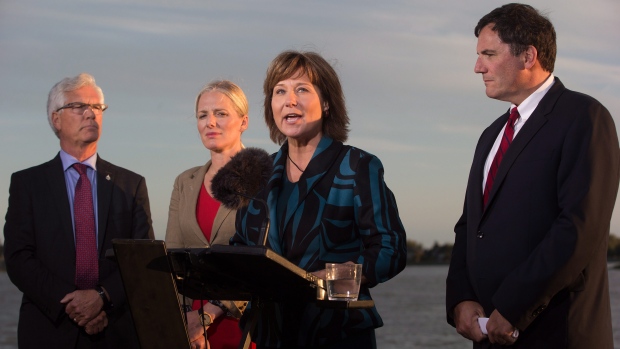 ANALYSIS: For a premier who has rarely missed an opportunity to rally against neighbouring Alberta for failing to diversify its economy, British Columbia’s Christy Clark seems entirely unaware of a nearly identical risk facing her own province.

“British Columbia has as much natural gas, as much energy, stored under the earth in the northeast as Alberta does in its oil fields,” the B.C. Premier boasted in comments late Tuesday evening alongside three federal cabinet ministers.

Clark and her Ottawa-based colleagues were on hand to announce conditional federal government approval of the Pacific Northwest LNG project; a massive $11.4-billion facility that, if built, would create thousands of well-paying jobs and provide an export outlet for as much as three billion cubic feet of daily Canadian natural gas production. That represents roughly one fifth of all the natural gas produced in this country.

In stating her support for the project, Clark happened to utter a phrase remarkably similar to one made countless times by pretty much every political leader in neighbouring Alberta.

“We want to make sure we can get these goods… to market,” she said.

Many were likely unamused by the irony of that statement, and with good reason. It was Clark’s government that responded to various calls from Alberta to get its own goods to market by imposing strict conditions on Alberta’s attempts to reach those markets.

Clark’s resistance emboldened opponents to new oil sands pipelines in her province, contributing to the economic challenges Alberta now faces as its oil sands industry continues to sell its output at a substantial discount due largely to a lack of market access new pipelines would have created. The B.C. Premier acknowledged those challenges in her comments.

“We see how Alberta is struggling mightily right now, huge unemployment numbers; an economy that’s really, really, really struggling,” she said. “And, you know, in British Columbia we’ve managed to sustain the strongest economy in the country without LNG.”

While it is true B.C. has by far the strongest provincial economy in the country, Clark failed to mention a huge proportion of that growth has been borne on the back of what most economists consider unsustainable gains in the Vancouver real estate market. According to the Business Council of British Columbia, roughly 40 per cent of economic growth in that province is directly related to housing.

B.C. has taken shots at Alberta’s overreliance on energy before. In its February speech from the throne, the provincial government set its legislative agenda for the year by warning it must “stay vigilant” to avoid the mistakes its neighbour to the east has made when “over the decades, Alberta lost its focus.”

Despite that cautionary tale, B.C. appears no more focused today on avoiding a very similar fate to the one Alberta is now facing.

Add to that the plethora of ways in which the Pacific Northwest LNG project might still never get built and it seems clear that much of the criticism Clark has levelled against Alberta could easily apply to her as well.