The 90-day cease-fire in the U.S.-China trade war added about US$520 billion of market value back to Asia’s equity markets on Monday. Now, it looks like the party is over.

Here is where we are: Asian shares took a breather Tuesday, with the MSCI Asia Pacific Index coming off from an almost two-month high. Japan’s Topix closed 2.4 per cent lower, ending its seven-day rising streak as investors took profits and the yen strengthened. Chinese shares fluctuated between gains and losses, and Hong Kong’s Hang Seng Index ended up rebounding after falling 0.7 per cent.

The theories swirling around the short-lived rally in Asian stock markets include:

A lot could happen in 90 days and there hasn’t been much clarity past that. Pictet Wealth Management wrote in a Dec. 3 report that “the devil will be in the negotiation details.” Some say investors are seeing a “sell the rally” strategy play out. There was also the fact that Trump left his advisers scrambling on Monday to explain a trade deal he claimed he’d struck with China to reduce tariffs on U.S. car exports. This agreement doesn’t exist on paper and hasn’t been confirmed by Beijing, which has thrown some shade on the optimism. We had an analysis piece about Chinese firms that are worried the U.S. trade-war truce could be short-lived.

This brings us to: what happens now? Without slanting the discussion one way or another, there are several things to watch our for. First, market turbulence is here to stay. In a research report published Monday, Societe Generale strategist Frank Benzimra said the trade truce is a positive development for risky assets, but future talks may not be smooth and that “opens the door for more volatility during the next three months.” That should be good news for traders.

Aberdeen Standard Investments fund manager Bharat Joshi is more skeptical. He recommends riding the wave available from this run-up in stocks, but that this won’t last long. “The recent gain from the truce between U.S. and China is more like a knee-jerk reaction, and I don’t expect that to help the overall global fundamentals going forward,” he said. “I would prepare myself to cash in in six months or so.”

Credit Suisse published a note where it upgraded South Korean stocks to a buy rating and Taiwan to a hold. In that report, the firm’s analysts also said emerging-market stocks will have a more favorable climate next year on a flat to marginally weak U.S. dollar, while it double-downgraded Indian equities to sell and dropped Malaysia one notch to a hold rating.

For the optimists out there, perhaps historical data can help: December hasn’t traditionally been a bad month. In the past 30 years, the MSCI Asia Pacific Index had positive December returns almost 70 per cent of the time. While the first day of that month hasn’t anticipated the gauge’s monthly direction in the past two years, it did between 2011 and 2015.

One bright spot in Asia has been the Philippine market -- the country’s benchmark gauge kept its momentum, taking its two-day rally to 4.6 percent and going past a key level of 7,700. “There are no sellers right now, so stocks are rising sharply and rapidly,” said Manuel Cruz, a strategist at Papa Securities. 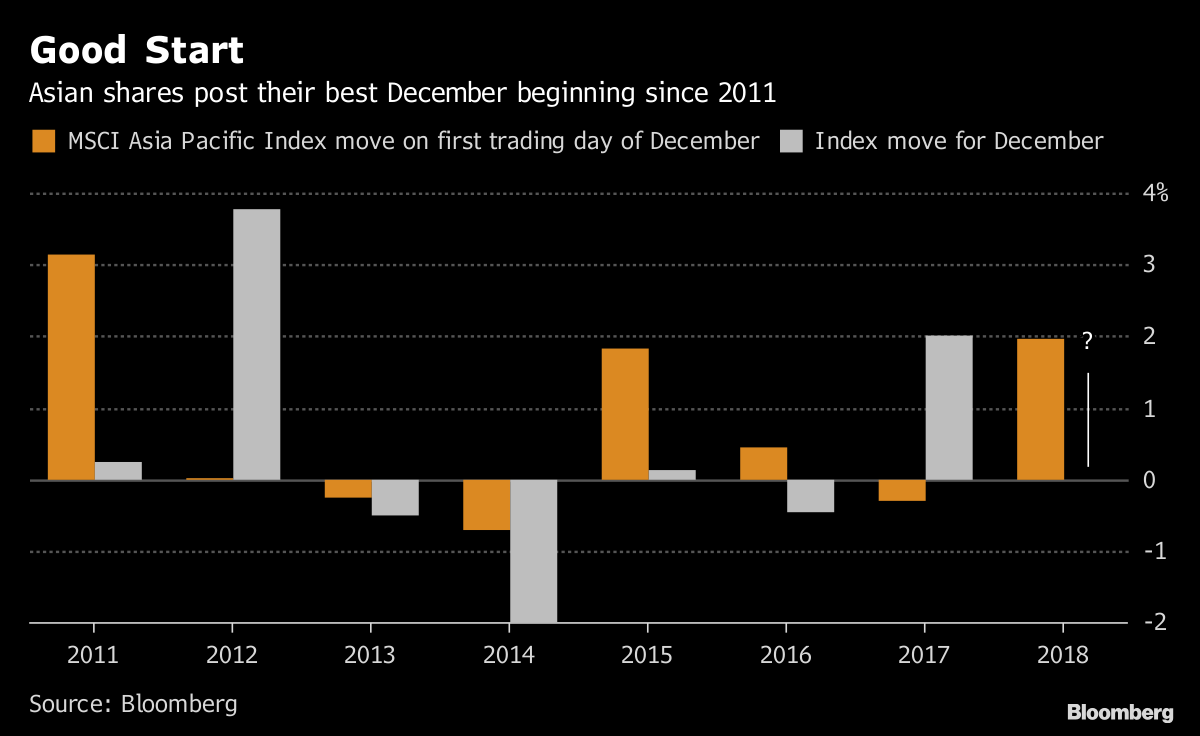 Here are some notable movers in the region: