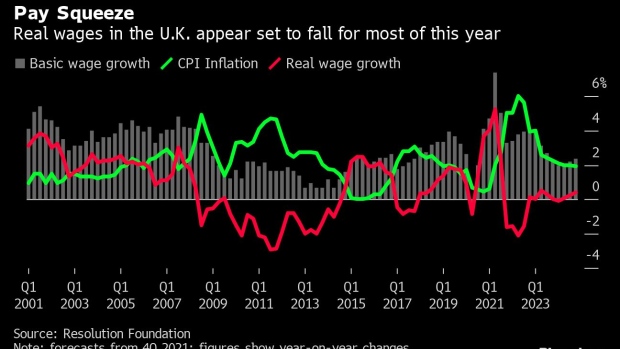 (Bloomberg) -- Soaring energy prices and rising inflation are causing policy headaches around the world. In the U.K., though, the government is raising taxes at the same time, kicking off an economic experiment in one of the countries worst-hit by the pandemic.

Britain’s acute cost-of-living crunch will hit in April, instantly stretching household and company budgets and penalizing the poorest households, many of which have already been most impacted by Covid-19.

The squeeze is coming from all sides. U.K. consumer price-growth hit a 30-year high of 5.4% in December, and is wiping out wage gains. The Bank of England is jacking up interest rates faster than the Federal Reserve. A cap on domestic energy costs is expected to rise by 50% in April, just as taxes increase in a bid to repair the U.K. public finances. Brexit hasn’t come cheap, either.

The Resolution Foundation think tank says the outcome will be a “living standards catastrophe,” and the Centre for Economics and Business Research reckons annual living costs for a typical U.K. household will rise by 1,980 pounds ($2,700) — even before taxes go up.

While lawmakers in Westminster debate whether Prime Minister Boris Johnson should resign over whether he broke lockdown rules, the cost of living is fast becoming the country’s key political battleground, and a real danger for him — or for his successor.

Calls to mitigate the very worst impacts are already growing. Meanwhile, the looming crunch also serves as a test-case for other nations attempting to chart an economic course away from the pandemic.

“We are watching the U.K. for many reasons,” said Holger Schmieding, chief economist at Berenberg Bank. “The U.K. has more need to put its fiscal house in order as its initial response was bigger.”

For many this new challenge is equally as serious as the furloughs, homeschooling and health fears they endured during the worst of the pandemic.

Lowri Williams, 51, who lives in Blackpool in the northwest of England, used to run a company with her ex-partner before an acrimonious separation left her in financial difficulty. As a self-employed company director she was ineligible for government support during the pandemic. She is now struggling to make ends meet, even before April comes around.

“I survived Covid the last two years because I was already living this hell since 2017. Me and my daughter have lived literally running by the seat of our pants on a daily basis,” she said.

“It wears you down and it wears you out on a daily basis, because all you are thinking about all the time is, ‘Oof, I got through another day.’”

Getting through the day will be harder in April: The recent surge in wholesale energy costs means regulated gas and electricity prices will increase sharply. Prices are already rising in Europe, but April’s one-off increase will push U.K. energy-price inflation above its continental peers in one move.

Karen Blinco, 31, a single mother of two girls in the town of Oldham, near Manchester, already struggles with the cost of heating her home. She only turns her heating on briefly each morning, so it’s warm when her children get out of bed.

“It’s freezing all the time, I have to get the girls fluffy pajamas and we’re all in dressing gowns,” Blinco said. She highlighted the loss of a weekly 20 pound welfare boost, a temporary pandemic uplift to the U.K.’s Universal Credit program, which ended in September.

Across much of Europe, and the U.S., inflation has risen or is on course to rise to 30-year highs, due largely to soaring gas prices. Several countries, such as Italy and Spain, have slashed energy levies or provided broad subsidies to ease the pain.

But Britain faces a unique pinch-point. While most countries are grappling with rising gas prices, the U.K. is moving more quickly than others to repair its public finances after the pandemic and to raise interest rates in a bid to rein in inflation.

Britain will take 14 billion pounds in taxes from working households this year via national insurance contributions, a form of payroll tax, and by freezing tax thresholds. Another 12 billion pounds will come from businesses in 2023 when corporate taxes rise.

According to the Organisation for Economic Cooperation and Development, the U.K. is leading the way in Europe on fiscal repair — normalizing borrowing levels faster than Germany, France, Italy and Spain.

In December, the OECD said there is a balance to be struck between “maintaining stimulus for too long and removing it too quickly.” Britain has volunteered to test the case for rapid withdrawal. For some, the moves will revive memories of the years of fiscal austerity after the 2008 financial crisis.

The U.K. was also the first out of the blocks among major central banks on interest rates, with a 15 basis-point increase in December. The BOE’s mandate provides less room to tolerate inflation than the U.S. Federal Reserve, the European Central Bank or the Bank of Japan.

Yet the BOE now finds itself trapped, according to Adam Posen, president of the Peterson Institute for International Economics. Brexit cut off some migrant labor flows, leaving Britain more exposed to global inflation shocks.

“Monetary policy no longer can assume price shocks should be treated as one-offs,” Posen said. That is “a warning to the U.S. which is on the same path with regard to limiting immigration, at least.”

Households may be bracing themselves, but businesses will not escape the shock.

April’s tax rise, a 1.25% increase in national insurance earmarked for the National Health Service, will be met by employers as well as their staff. Unlike households, business is already being squeezed by commodity prices, supply chain problems, labor shortages and Brexit-related administrative burdens.

“The tax rise is definitely going to put pressure on us,” said Rowan Crozier, chief executive of C Brandauer & Co., a metal casting engineer in Birmingham, the U.K.’s second-largest city.

“First, it’s going to mean our costs go up, and as staff are going to be paying more in tax — so will be taking home less — they are going to want a bigger pay rise. We will be seeing increased costs and will probably have to pass that on.”

The risk is that the April crunch hurts the economy, which has been resilient so far, growing more than expected in November. Persistent inflation is steasdily pushing up the cost of household staples: Butter and eggs each cost 7.2% more than a year ago, according to the U.K’s Office for National Statistics. High street retailers Greggs Plc, Britain’s biggest bakery chain, and clothing brand Next Plc, are already raising prices.

The BOE expects inflation to peak at around 6% in April, though others forecast something closer to 7%. Chris Hare, U.K. economist at HSBC, believes consumer prices — even excluding energy — will continue to rise at least through April. Supply chain imbalances “won’t ease for a while yet,” he said.

Dan Hanson, U.K. economist at Bloomberg Economics, expects inflation-adjusted incomes to fall by 1.2% this year. That would be the biggest drop since 2011, setting up “an increasingly fragile outlook for growth.”

Resolution has a similar forecast, making 2022 the third real wage squeeze in a decade after the post-financial crisis slump and Brexit — a rapid-fire series of upheavals unheard of in the post-war period.

Even that understates the squeeze approaching. For a household with a 150,000 pound mortgage, the BOE’s rate rise in December and another quarter-point hike expected in February will add another 600 pounds a year to household costs. Rents are also increasing, rising 1.8% last year, the fastest annual pace since mid-2017.

The typical U.K. household, on income of 27,000 pounds after tax and housing costs, will be paying 600 pounds extra in both energy bills and taxes, Resolution says. National Energy Action estimates that 6 million U.K. households will be living below the poverty line by April after making their fuel payments, a 50% increase from 2021.

Public awareness of the coming crunch is rising. A raft of U.K. energy providers went out of business after wholesale prices rose in late 2021; consumer confidence is also falling, with people less optimistic about their future personal finances or purchases.

Without intervention, it will be the poorest households that suffer the biggest overall hit to their incomes, according to analysis by the Tony Blair Institute for Global Change. The richest 10% will take the next-biggest hit, but the burden on them will be half as severe.

Some members of Johnson’s own tribe have even called for the 12 billion pound April tax rise to be canceled. The opposition Labour Party wants VAT on energy bills cut, a move that would cost around 2.5 billion pounds. The Government suggests that would support poorer households, though most of the actual cash would go to wealthier Britons, who spend more heating their homes.

A rise in the minimum wage, also due in April, and a reduction in the rate at which benefits are withdrawn from workers are each worth about 1,000 pounds a year, though few households will receive both.

There is a growing consensus that some of the worst impacts will need to be avoided. Paul Johnson, director of the Institute for Fiscal Studies, suggests a one-off uprating in benefit payments this year. Steffan Ball, U.K. economist at Goldman Sachs Inc., and a former Treasury adviser, expects a 12-month VAT cut, an increase in the Warm Homes Discount, and a small loan relief scheme for energy providers.

The U.K’s one advantage is time. The crunch hits in April, allowing a targeted fiscal response, and putting the focus on Chancellor of the Exchequer Rishi Sunak. Yet Sunak is in a bind. He wants to keep both public borrowing and taxes in check, and repair the balance sheet, against a backdrop of global inflationary pressures. All while he’s touted as a leading candidate to replace an increasingly unpopular prime minister.

Whether Johnson survives or not, the next few months will be closely watched by millions of Britons — and by other nations weighing up their next move.