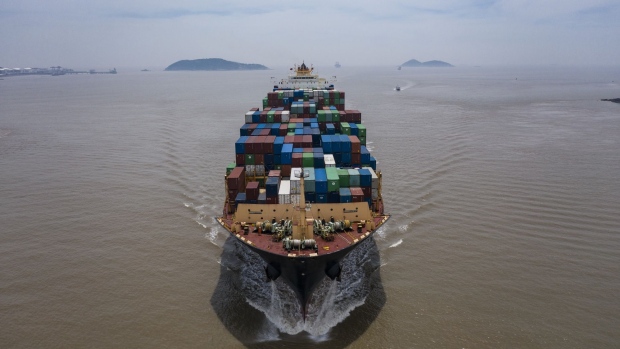 The Kota Cepat vessel loaded with shipping containers approaches the Yangshan Deepwater Port in this aerial photograph taken in Shanghai, China, on Sunday, July 12, 2020. U.S. President Donald Trump said Friday a phase two trade deal with China isn't under consideration, saying the relationship between Washington and Beijing has deteriorated too much. , Bloomberg

As U.S.-China ties have deteriorated since the Covid-19 pandemic devastated the globe, the trade deal they signed in January has served as sort of a linchpin in the relationship. Now that also could be coming undone.

President Donald Trump, who has repeatedly blamed China for the virus’s spread ahead of the U.S. election in November, said Thursday the phase-one trade deal “means less to me now than when I made it.”

He spoke shortly after the U.S. shut down China’s consulate in Houston for spying and theft of intellectual property, which prompted Beijing to retaliate Friday by ordering American diplomats to abandon their Chengdu outpost.

“The phase-one trade deal between the U.S. and China hangs by a thread,” said Eswar Prasad, who once led the International Monetary Fund’s China team, and is now at Cornell University. “China has an incentive to keep the trade deal with the U.S. from crumbling, even as the bilateral relationship becomes more toxic, in order to try and limit damage to its economic recovery.”

The Trump administration has repeatedly upped the ante in its effort to pressure China, from imposing punitive tariffs to moving to kneecap Huawei Technologies Co. to shutting down the consulate -- one of the worst blows to diplomatic relations in four decades of relations.

Secretary of State Michael Pompeo has cast the fight in ideological terms, saying Thursday that “securing our freedoms from the Chinese Communist Party is the mission of our time.”

The heated rhetoric sparked panic buying in China on Friday, with the CSI 300 Index falling 4.4 per cent at the close while the ChiNext Index dropped 6.1 per cent, the most since Feb. 3. China’s yuan fell to the weakest since July 8.

For China, the trade deal serves as important cushion for its own economic recovery. The truce agreed in January lifted the threat of higher tariffs on Chinese exports, which has been all the more critical given the collapse in shipments triggered by the pandemic.

Both exports and imports improved in June, helping to solidify a broader recovery in the world’s second-biggest economy.

“China is working very hard to honor its promises,” said Jiang Yuechun, a senior research fellow with the China Institute of International Studies in Beijing, a research institute connected with the Foreign Ministry. “We always say that economic relations are actually the ballast for China-U.S. relations. Now the ballast is becoming weaker and weaker, and that is why now the ship of China-U.S. relations is going up and down.”

At the January signing of the trade deal, in which China pledged to spend $200 billion to close the trade imbalance, Trump said the nations were “righting the wrongs of the past.” Even as the pandemic put China way behind on planned purchases, the U.S. president has still backed the deal. Last month, after one of his advisers made comments indicating the agreement was in jeopardy, Trump tweeted that the deal was “fully intact.”

One reason the deal has held up is because economic officials in both Washington and Beijing are more pragmatic in their approach given the economic consequences at play, according to Louis Kuijs, head of Asia Economics at Oxford Economics in Hong Kong.

“Compared to diplomacy and international relations, the economic portfolio is in the hands of less hawkish people on both sides,” Kuijs said. “The more that overall relations deteriorate, the more important the trade deal is as the one area where the two sides interact and discuss things relatively constructively, thereby providing a narrow pathway to maintaining dialogue between the world’s two largest economies.”

Global banks and asset managers are ramping up investments in China even amid the political tensions. JPMorgan Chase & Co. was approved last month to take full ownership of its China futures unit, while Morgan Stanley and Goldman Sachs Group Inc. in March won clearance to take majority control of their onshore securities ventures.

President Xi Jinping has made personal appeals to foreign companies to stay in China, telling global CEOs in a letter this month that his government would look to “provide a more sound business environment for Chinese and overseas investors.” His administration has also resisted slapping sanctions on a wide range of U.S. companies despite threatening more than a year ago to release an “unreliable entities” list.

In shuttering the U.S.’s Chengdu consulate Friday, the Foreign Ministry said the downturn in ties “is not what China desires to see.” Those sentiments were echoed by Hu Xijin, editor of the Communist Party’s Global Times newspaper, who wrote that China had to take reciprocal action but “obviously does not want China-U.S. relations to fall in a free fall.”

Scuppering the trade deal could lead to another round of tit-for-tat tariffs, sanctions and visa restrictions that will damage both economies even more as they look to recover from the pandemic, according to Kelsey Broderick, an analyst at Eurasia Group. Moreover, she said, “the risk of an accidental military clash goes up with hot tempers on both sides.”

Still, for now it looks like both Trump and Xi want to avoid that. Officials from both China and the U.S. have repeatedly reaffirmed the commitment to the trade deal, and neither side sees much advantage at the moment in giving it up, said James Green, a former U.S. trade official in Beijing who is now a senior adviser for geopolitical consulting firm McLarty Associates.

“For the U.S., there is little expectation at the cabinet secretary level that ending the agreement will lead to any additional advances, so best to stick with it,” he said. “On the Chinese side they will hunker down until November, moving tit-for-tat on non-trade areas and avoiding strategic choices until after the election.”