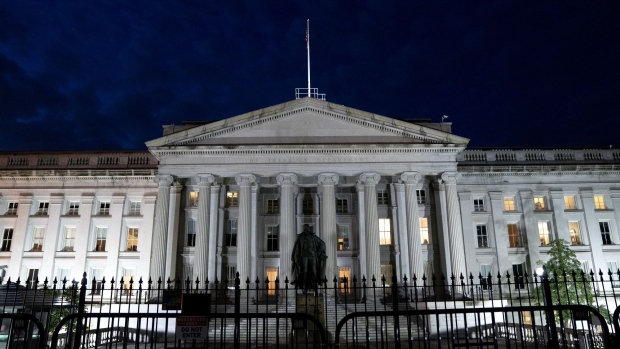 The Treasury Department in Washington, D.C., U.S., on Friday, Oct. 8, 2021. The Senate approved legislation Thursday that pulls the nation from the brink of a payment default with a short-term debt-ceiling increase, breaking a weeks-long standoff that rattled financial markets. Photographer: Stefani Reynolds/Bloomberg , Bloomberg

(Bloomberg) -- The U.S. Treasury has already mapped out how to use up most of the half-a-trillion-dollar debt-ceiling increase that Congress has passed, so any let-up in money-market pressures is likely to be brief.

While the $480 billion of extra capacity at first glance seems like a big number, it will almost immediately shrink after Joe Biden signs it into law. That means investors who park their funds in short-term instruments are unlikely to get the kind of boost to Treasury bill supply that they’ve been craving for most of this year, keeping rates in associated markets tethered close to zero.

One of the biggest bites out of the new limit will come from the so-called extraordinary measures that Treasury Secretary Janet Yellen has been using to keep things ticking over. Replenishing the coffers that these have drawn on will use up more than half of the planned limit increase, with the Treasury having tapped some $301 billion of the $350 billion available, as of Oct. 6. These kinds of measures can, of course, be utilized once more as a new still-to-be-determined X-date for the ceiling comes around some time in December, but for now they have to be accounted for.

On top of that, the Treasury has also conducted a slew of coupon-bearing debt auctions and scheduled new sales of cash management bills, and once these settle the debt-limit headroom is set to shrink even more, although paydowns of existing debt will offset some of that.