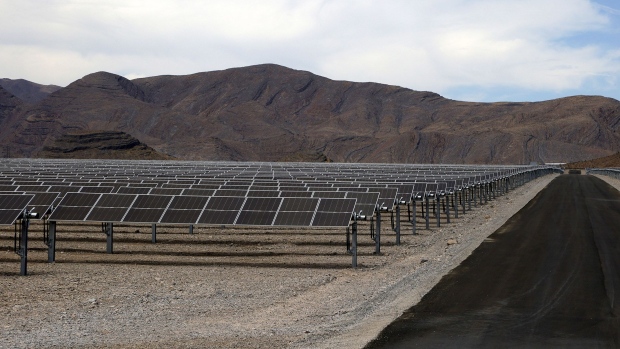 DRY LAKE VALLEY, NEVADA - JUNE 28: Solar panels from the 100-megawatt MGM Resorts Mega Solar Array are shown after it was launched on June 28, 2021 in Dry Lake Valley, Nevada. The project sits on 640 acres of desert about 30 miles north of the Las Vegas Strip in the Dry Lake Solar Energy Zone. Its 323,000 7-by-3-foot solar panels are forecast to generate about 300,000 megawatt-hours - about 35 percent of MGM's annual electricity use in Las Vegas - making it the hospitality industry's largest directly sourced renewable electricity project in the world. All the solar power generated is scheduled for use by MGM Resorts. On hot summer or spring days, the array can produce up to 90 percent of the daytime power needs of MGM's 13 Las Vegas properties which is equivalent to the power used by about 27,000 average U.S. homes annually. (Photo by Ethan Miller/Getty Images) , Photographer: Ethan Miller/Getty Images North America

(Bloomberg) -- After years of waiting, Infrastructure Week finally happened. Last Wednesday, U.S. senators reached a bipartisan agreement on a $550 billion infrastructure bill, working through the weekend to finalize the text. On Sunday, Majority Leader Chuck Schumer said the bill could be voted on “in a matter of days.”

While Congress was debating the size of the check, researchers at Princeton University’s Andlinger Center for Energy and the Environment were preparing a report showing that the pace of infrastructure investment will have to speed up—considerably—to reach President Joe Biden’s goal of net-zero greenhouse gas emissions by 2050.

“That pace question is the critical issue,” said Chris Greig, senior research scientist at Princeton and author of the report, published today. “Doing things the way we've always done them, we will fail in this mission to net zero by 2050.”

The team’s analysis builds on the Net-Zero America Report, another Princeton study published at the end of last year, which outlined five “technologically and economically plausible” pathways to decarbonizing the U.S. economy by 2050. The new report considers two of those pathways—one that relies more heavily on non-renewable sources of clean energy such as nuclear generation, and one that uses 100% clean energy. In either case, even with environmentally supportive policies, the U.S. would only get about halfway to achieving net-zero emissions by 2050 if it continues delivering infrastructure at the rate it does now.

To gain some perspective on how much faster we need to move in the future, it’s important to see where we are now. The U.S. broke its own record for solar installations last year, installing 19.2 gigawatts of generating capacity, according to the Solar Energy Industries Association. But even with all that new solar energy, it would need to install an additional 800 megawatts each week to reach net zero in 30 years, according to the report. One 400-megawatt solar power station is the size of 130 Tokyo Olympic stadiums, the authors say, and would take three-and-a-half years to build under current circumstances.

Speeding up that timetable will require five key shifts in the way the U.S. plans and develops infrastructure projects: thinking of value beyond financial returns; using existing renewable technology while also investing in new ones; standardizing designs for greater, faster scalability; greater collaboration between government, communities and capital markets; and embracing digital technology to keep the whole system running.

The study was produced in partnership with Worley Ltd., an Australian engineering company with a number of clean energy projects in its portfolio, including Ireland’s first green hydrogen plant and a Belgian steel plant aiming to recycle carbon-dioxide emissions into ethanol biofuel. Chris Ashton, Worley’s chief executive officer, is an unabashed optimist. “The capacity for the world to achieve extraordinary things is nothing short of mindboggling when we come together with the goal of something that has a greater purpose,” he said.

Big business is waking up too, Ashton said, pointing to the recent shareholder campaign that succeeded in putting two environmental reformers on the board of oil giant Exxon Mobil. “I expect we will see the Exxon Mobil of today is going to make a different set of decisions based on what Engine No. 1 have achieved.”

Congress, however, is another story. Even if it passes the Senate, the infrastructure bill is far from a done deal, and House members are already calling for revisions. For Greig, framing the question the right way helps simplify things considerably. “Success is non-negotiable,” he said. “In 2050, we have to be net zero. A shortfall is not acceptable. When you put that lens on this challenge, it forces you to think differently.”