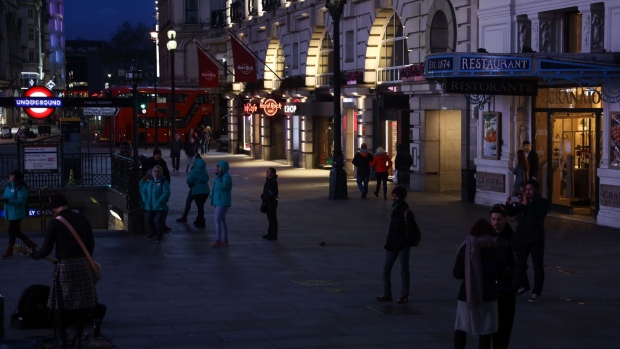 Pedestrians walk through Piccadilly Circus in the West End district in London, U.K., on Friday, March 20, 2020. A shutdown of the U.K. capital would hit the night-time economy hard -- one in three employees in London works between 6 p.m. and 6 a.m., many in the pubs, restaurants and clubs most at risk of survival because of the pandemic. Photographer: Simon Dawson/Bloomberg , Bloomberg

(Bloomberg) -- Headwinds for the UK economy spell trouble for sterling, and the real test for the Bank of England and the currency may still be in store.

The cost-of-living crisis is about to intertwine with the energy crisis this winter, leaving the BOE in a bind. UK wholesale natural gas prices have more than tripled in the last year and are more than four times higher than the seasonal average over the previous five years. Household energy bills are forecast to rise while the government plans for organized blackouts in a worse-case scenario in January.

If the energy crisis gets out of hand, the market might expect the BOE to pivot because rates can only do so much in the face of supply-driven forces such as Russian gas supplies, inventories, and alternate energy sources that are being tested by climate change.

There is also the question of fiscal support and the uncertainty surrounding it. The BOE has forecast inflation topping 13% in coming months and a recession through 2023 as it raises rates. The central bank is an apolitical body that has no say over government fiscal policies, making whoever becomes the next prime minister that much more significant. Front-runner Liz Truss is pledging an emergency budget and more borrowing to stimulate the economy, while the competing former chancellor Rishi Sunak is advising caution while also vowing to offer more cost-of-living support.

Currency traders aren’t convinced that economic data Friday is enough to prove the economy’s resilience, which is why even as money markets are raising their BOE tightening bets, the pound is the second worst-performing G-10 currency against the dollar on the day.

But it’s fair not to read too much into the curious gross domestic product print. A small contraction was expected given the Jubilee bank holiday, but June’s drop is smaller than in comparable periods, as Samuel Tombs, chief U.K. economist at Pantheon Macroeconomics, noted. July data will likely offer a better picture. It’s possible that numbers would either be revised lower or show that the economy has indeed been more resilient than many expect. Looking ahead, however, there aren’t many other concessions that the pound can give way to.

NOTE: Nour Al Ali writes for Bloomberg’s Markets Live. The observations are her own and not intended as investment advice. For more markets commentary, see the MLIV blog.