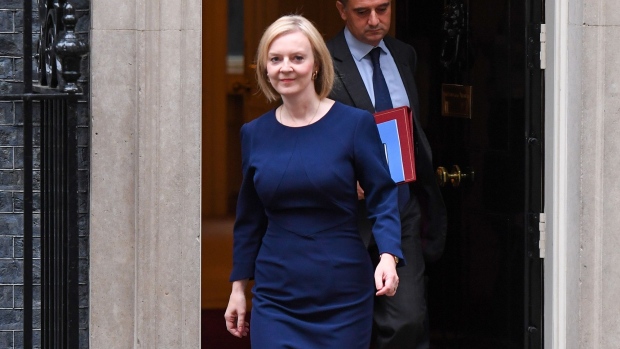 The collapse of the pound and UK government bonds in the wake of Prime Minister Liz Truss’s historic tax-cutting plan has exposed vulnerabilities in a usually sleepy corner of finance.

Fund managers running billions for pension funds faced collateral calls on strategies meant to give them exposure to long-dated assets to help match obligations that can extend decades. The so-called liability-driven investment, or LDI, funds were forced to post more collateral after receiving margin calls when gilt prices collapsed.

The central bank stepped in Wednesday after the calls threatened to push the gilt market into a downward spiral. The BOE had been warned by investment banks and fund managers in recent days that the collateral requirements could trigger a gilt crash, according to a person familiar with the BOE’s deliberations before they stepped in.

“The BOE intervention was required to prevent a vicious cycle becoming even more dangerous for pension funds forced to sell their gilt exposures,” Calum Mackenzie, an investment partner at Aon, said after the BOE intervention. “The market’s swift and significant reaction underlined the big risk faced by pension funds who have had or who could have had their liability hedges reduced.”

Firms including BlackRock Inc., Legal & General Group Plc and Schroders Plc manage LDI funds on behalf of pension clients. The pension firms use them to match their liabilities with their assets, often using derivatives.

The size of the LDI market has exploded over the past decade. The amount of liabilities held by UK pension funds that have been hedged with LDI strategies has tripled in size to £1.5 trillion in the 10 years through 2020, according to the Investment Association. These trades are typically used by defined benefit pension schemes.

“We are monitoring the situation in the financial markets closely to assess the impact on defined benefit pension scheme funding,” a spokesperson for The Pensions Regulator said in an emailed statement Wednesday. “We again call on trustees of DB schemes and their advisers to continue to review the resilience and liquidity of their investments, risk management and funding arrangements, and plan accordingly to protect the interest of scheme members.”

When yields fall the funds receive margin and when yields rise they typically have to post more collateral. After the spike in gilt yields on Friday and into this week, LDI fund managers were hit by margin calls from their investment banks.

LDI collateral buffers are partly set using historical data to build models based on the likely probability of gilt price movements, according to Shalin Bhagwan, head of pension advisory at DWS Group. The sudden recent surge in gilt yields “blew through the models and the collateral buffers,” he said.

“Any pension funds which has used even moderate levels of leverage are struggling to keep pace with the moves,” Mackenzie said before the BOE intervention. “You have a bit of a death spiral potentially where pension funds in particular are being forced to sell because they’re breaching their leverage agreements with their LDI counterparties.”

(Updates with details on the amount of liabilities hedged by LDI trades in the sixth paragraph and comment from the UK Pensions Regulator in the seventh paragraph.)