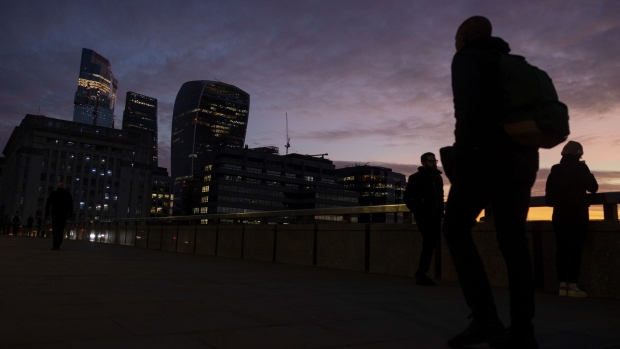 Commuters walk along London Bridge in the City of London, UK, on Monday Oct. 3, 2022. Traders are the most negative ever on the pound’s prospects, even after the UK government scrapped one of its new tax policies, a sign it will take a bigger policy U-turn to restore credibility with markets. , Bloomberg

(Bloomberg) -- The UK is failing to develop a skilled and globally desirable workforce, with domestic talent increasingly less attractive to overseas businesses, according to a new survey of international executives.

Economic problems in the aftermath of Brexit, as well as turbulence in British politics, means the UK and its workforce is less appealing to global business, the poll of over 5,000 executives by the Institute for Management Development showed.

The UK is now ranked 28th of 63 countries on the organization’s World Talent Ranking, which considers talent creation and retention. That’s down seven places from a year ago, the IMD said.

Britain is facing economic problems on many fronts. The economy is widely thought to be in recession, inflation is at four-decade highs, while strikes by public sector and other essential workers are causing widespread disruption to services, and rising interest rates are prompting a downturn in the housing market.

Growing economic inactivity in the UK means the labor market remains tight, with 600,000 more people no longer employed or looking for a job compared to pre-pandemic. Economist Nouriel Roubini said this week that the country “is already in a severe stagflation,” a situation he partly attributed to Brexit.

Against that backdrop, confidence in Britain to provide a stable backdrop for business appears to be decreasing. The IMD report noted that declining standards of education and the quality of life in the UK are making business leaders skeptical about its ability to produce a skilled workforce.

“This is a concerning situation for the UK with no quick fix,” said Professor Arturo Bris, Director of the IMD World Competitiveness Center.

“Until the UK is able to deal with the turmoil in its politics and markets which has dominated recent years and take action to revamp its domestic situation, it will be unable to attract or retain the talent it needs to restart growth and drive innovation.”

Switzerland took top spot in the IMD’s rankings for the sixth consecutive year. Sweden, Iceland, Norway and Denmark made up the rest of the top five.