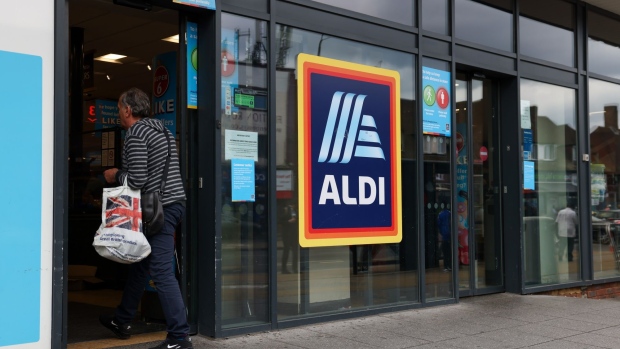 Twenty years ago, many British shoppers hadn’t even heard of German discounter Aldi.

Fast forward to today and the chain is the fourth-largest grocer in the country, gaining market share from bigger rivals as millions of Britons search for cheaper bills on their weekly shop.

It’s a repeat of the aftermath of the financial crisis when Aldi and its fellow German discounter Lidl stole shoppers from the likes of Tesco Plc and J Sainsbury Plc. This time, the British stalwarts have learned their lesson, bringing out more own-brand ranges and launching price matching campaigns against Aldi. The fight to maintain shopper loyalty is fiercer than ever.

A recent visit to Purley, south London, found the parking lot outside Aldi boasting BMWs, Land Rovers and Porsches and shoppers choosing Aldi over nearby branches of Lidl and Sainsbury, as well as the upmarket Waitrose 10 minutes away.

“The price difference is crazy,” said Jay Hall, a start-up founder sitting in his new Porsche Cayenne. Hall switched from Waitrose to Aldi earlier this year when the cost of living started to rise. “I took my shopping list to Waitrose and it’s like £170 and then here it was like £50. I will probably stick to Aldi for a while.”

He’s not alone. In the three months to early September, Aldi gained about £64 million of sales from Tesco, £43 million from WM Morrison Supermarkets Plc, £41 million from Asda, £21 million from Sainsbury and £8 million from Lidl, according to Kantar data seen by Bloomberg News.

An extra 1.5 million customers have visited Aldi over the past three months. When sales were up by at most the low single digits at most UK supermarkets, they rose 19% at Aldi and 20.9% at Lidl. Aldi will reveal more details on its progress when it publishes financial results on Monday morning.

Part of the strategy is economy of scale. Aldi has about 2,000 key products in store, compared with as many as 30,000 in some large rival supermarkets. By stocking just one ketchup, for example, Aldi has a tight supply chain and can avoid pricing rows like Tesco’s recent spats with Kraft Heinz Co. and Mars Inc.

But Aldi has also delivered on quality, winning awards for its Christmas puddings and cheese. Its middle aisle of random items -- ranging from toys to garden rakes to ski jackets and pricey barbecues -- drives shoppers to purchase on impulse and on other occasions to queue up in advance.

“Some of these items sell out in hours when they go on sale,” said Charles Allen, an analyst at Bloomberg Intelligence. “If you’re not there first thing in the morning they will be gone.”

It’s not a bad turnaround for a retailer that by some accounts was considering withdrawing from the UK before the financial crisis because it wasn’t “gaining any traction,” according to Allen. The Porsches in Purley also show Aldi has shaken off some of the stigma that was attached to discount food shopping when it arrived in Britain in the 1990s.

Still, there are hurdles ahead. Future growth may be capped by Aldi’s number of stores in the UK -- about 970 compared with Tesco’s more than 3,000. Aldi has lots of shops in the north of England and Midlands but fewer in the south. It’s on the lookout for more and even advertises on its website for shoppers to find appropriate spaces in return for a finder’s fee.

Morrisons, which was taken private last year by US buyout firm Clayton, Dubilier & Rice, highlighted the growth of Aldi stores when it was knocked out of the big four earlier this month.

“Market share is partly a function of new store openings and although Morrisons has not put on any significant new space for a while, some competitors are still opening many new stores,” the Bradford-based supermarket said in an e-mailed statement. “But customers don’t really care about market share statistics - they care about value, quality, provenance and service and that is where our focus is going to remain.”

Still, Aldi insists it’s winning on price and quality and shoppers are accustomed to its own-label imitations of big brands. The chain sells Aperini at £6.99 versus an average of £16.03 for Aperol across major UK supermarkets, according to Trolley.co.uk, a compelling prospect when bills are rising for everything from heating to petrol.

Aldi’s Nordpak retails at £2.19 versus £4.75 for a 500mg tub of Lurpak, the popular spread owned by Arla Foods which recently grabbed headlines for its eye-watering prices. The retailer’s Nutoka spread sells at £1.25 per tub compared with £2.76 for Nutella. The list goes on.

“Shoppers are prioritizing value like never before,” said Giles Hurley, chief executive officer at Aldi UK and Ireland. “We are doing everything we can to make food shopping as affordable as possible for millions of households.”

So what next? Other supermarkets are reacting to the threat. Tesco price matches Aldi on more than 600 everyday items while Sainsbury does the same on over 200 products. Asda has its bright yellow Just Essentials range of own-brand products and even Marks & Spencer Group Plc is offering lower prices through its Remarksable value range including bread, milk and ground beef.

The squeeze on shoppers is showing little sign of easing. Grocery price inflation struck a record high of 12.4% in the last month, according to Kantar, and rising prices are still threatening to tip the UK into a recession.

“Aldi will continue to appeal well into next year,” said Honor Strachan, principal food and grocery analyst at GlobalData Plc, a research and consulting business in London. “We don’t expect a retraction just because consumers might have more money in their wallets in perhaps 2024.”