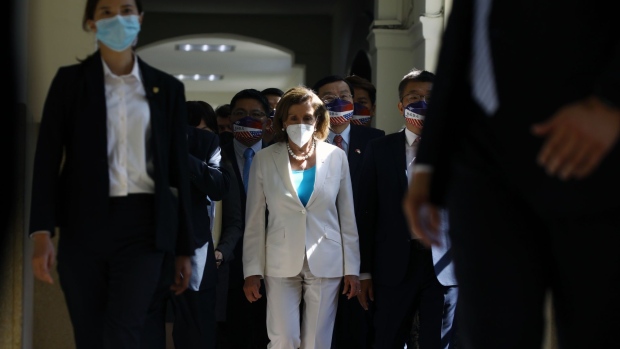 Photovoltaic modules at a solar power plant near Golmud, Qinghai province, China, on Saturday, Sept. 11, 2021. China is opening up its market for trading green energy, making it easier for multinationals from BMW AG to Airbus SE to buy wind and solar power and reach aggressive emissions goals. , Bloomberg

This month's biggest climate milestones happened over one weekend. On Sunday, the US Senate approved hundreds of billions of dollars in climate and clean-energy spending. Just two days before, climate cooperation between the US and China — the world’s largest economies and emitters — came to an abrupt halt.

How these two turning points shake out will determine the fate of global climate goals.

The end of climate cooperation between Beijing and Washington came Friday when, in response to House Speaker Nancy Pelosi’s visit to Taiwan, China suspended climate talks. The move wrecks a dialogue that was pivotal in securing the 2015 Paris Agreement and, more recently, yielded diplomatic momentum on curbing methane at last year’s COP26 climate summit.

To longtime observers of China-US relations on climate, there’s real cause for alarm. “The signal China is sending is clearly that a geopolitical red line has been crossed,” said Li Shuo, a climate analyst at Greenpeace East Asia. China’s willingness to work with the US on climate had previously managed to survive a trade war. “We know that when major countries, in particular, cannot get along with each other then that's certainly bad news for the climate agenda,” he said.

Then on Sunday, after more than five decades of knowing something had to be done about the “carbon dioxide problem,” the US Senate for the first time passed a major climate bill. If passed into law, as expected in the days ahead, this legislation will drastically increase clean-technology deployment and move the US closer to meeting its Paris commitment.It will also, over time, reduce American reliance on China’s immense supply chain for minerals and components that go into everything from electric cars to solar panels. Large parts of the $370 billion spending package are aimed at supporting green industries at home — or in countries more closely allied with US interests than China.

Taken together, these two events could mark a shifting away from climate cooperation. For Li, that’s ominous. Without China-US cooperation, after all, there would be no Paris Agreement. “The soil in climate governance is multilateralism,” he said. “I don't think without that soil we will be able to solve climate change.”

But a transition to climate competition between the US and China might not hold back progress. For some time now, China hawks have been making the case that, rather than work with China on climate, the US and other developed countries should compete — on everything from better EV batteries to more affordable solar panels.

“In Chinese foreign policy, climate change does not hold the same environmental and moral importance that it does for many American policymakers,” wrote Andrew Erickson and Gabriel Collins in Foreign Affairs last year. “Negotiating proactively with China cannot curtail climate change; Beijing would impose unacceptable costs while failing to deliver on its end of any bargain.”

According to Erickson and Collins, the Communist Party’s pact with its citizens is that, in exchange for growth and stability, they have to bear curtailed liberties and one-party rule. That means China’s foremost priority will be to maintain economic growth, which may include green technologies. That’s different from a serious commitment to decarbonizing. While government spending has made China the largest producer of solar panels, wind turbines, batteries and electric cars, it’s also made China the largest consumer of coal and largest producer of carbon-intensive steel and cement.

“China does a very good job of creating a picture that it is serious about acting on climate change,” said Taiya Smith, a senior associate focused on US-China relations and geopolitical risk at the environmental think tank E3G. “That’s very different from the work they are actually doing on climate change.”

From Smith’s point of view, the US-China conversations initiated at COP26 in Glasgow haven’t produced much tangible results. In its joint statement at the UN summit in November 2021, for example, China committed to come up with a comprehensive plan to cut methane emissions after meetings with US counterparts in the first half of this year. Nothing has come of that process, Smith said.

She sees global climate diplomacy entering a new era. While it was crucial to get countries to agree to a voluntary framework back in 2015, when the Paris Agreement was signed, last year’s global climate summit in Glasgow shows that multilateralism is reaching its limits. The last-minute intervention from US, China and India to water down language around coal use nakedly showed how big economies wield their power in global pacts.

“Now,” Smith said, “we’re all trying to figure out how to help the world continue down the energy transition” at the pace we need. The most effective answers won’t always come from global frameworks.

With the passage of the Inflation Reduction Act, the US will inject nearly $370 billion in government spending over the next decade aimed at tackling emissions. That changes the status quo. One of the largest emitters will no longer be paying lip service to climate urgency on a global stage; instead the US is actually doing something to curb its emissions by as much as 40%.

“It is difficult for China to stay aligned with the US,” Smith said, “especially if the US is starting to move.”

Up to now, China had moved far faster in terms of support for the energy transition. In 2021 alone, BloombergNEF found that China spent nearly $300 billion on the energy transition compared to $120 billion from the US. The Senate climate legislation, if passed into law, will no doubt boost private investments in the US. But it will take years to begin to match the capacity China has built over the past decade — and playing catch up is, of course, a kind of competition.

“Having the US and China feel like they’re competing to do more on climate change in order to write the new global order is the strongest position the world could be in,” said Smith.

China may continue down the green path all in self interest. The country is among the most vulnerable to climate impacts, and an unstable climate would not make a stable country that the CCP has promised citizens.

And its split away from the US on climate may be for more reasons than the Taiwan stand off. The major theme at the next UN climate summit, to be held this fall in Egypt, will be to hold developed countries to their promises of climate finance for developing countries. That will likely be a moment for China to position itself as a champion of poorer nations.

The next three months before countries meet in Sharm El-Sheikh for COP27 will show whether the era of cooperation has given way to competition. What we can be more sure about than ever before is that, even as the world tackles energy, food, and inflation crises or war, climate will likely feature high on the global agenda with or without a looming COP meeting.

“As long as we hold out this theory that climate change is something distinct from the rest of the diplomatic relationship, then we fail to actually understand what it is,” said Smith. “Climate change is everything that we do. Acting on it will require fully restructuring the global economy. It’s going to force all of us to have a new way of life.”

Akshat Rathi writes the Net Zero newsletter, which examines the world’s race to cut emissions through the lens of business, science, and technology. You can  email him  with feedback.