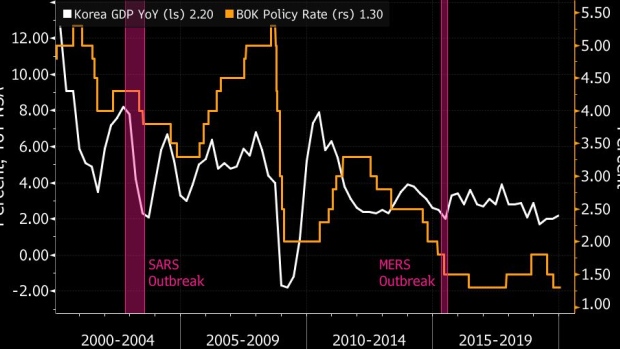 (Bloomberg) -- Global economists are continuing to grapple with a new and unexpected threat to economic growth, leaving them scrambling to assess how quickly commerce can recover from the impact of the coronavirus.

Research by Bloomberg Economics shows China is slowly getting back to work, with the economy running at 50%-60% capacity in the week to Feb. 21 and forecast to jump from Feb. 24. Still, the spread of the virus is starting to ripple into supply chains across the world, and showing up in data across Asia and Europe.

In more conventional economic matters, policy makers from the U.K., Canada, Europe and the U.S. give speeches that may give clues into their view of the global outlook, while the world’s biggest economy publishes personal spending data.

Here’s what happened last week and below is our weekly wrap of what else is going on in the world economy this week.

As the coronavirus’s spread continues to overshadow the region, China will release PMI data on Saturday that will give the first official read on how badly the world’s second-largest has been hit. South Korea’s central bank will meet to set policy on Thursday. Governor Lee Ju-yeol has warned the coronavirus outbreak could have a negative impact on the economy, but downplayed growing speculation the bank was preparing to cut interest rates.

President Donald Trump is scheduled to travel to India from Monday to meet Prime Minister Narendra Modi. The White House has downplayed speculation that the leaders will make progress on a planned trade deal. India also publishes fourth-quarter GDP data on Friday.

With the fallout from the coronavirus very much on policy makers’ minds, European Central Bank President Christine Lagarde and more than half a dozen Governing Council members are scheduled to speak. ECB Chief Economist Philip Lane told Bloomberg Television on last week that he expects the euro-area economy to bounce back from the outbreak and economic sentiment data for Germany on Monday and for the region on Thursday will show if it has left its mark on confidence. German inflation and unemployment data round off the week and Jens Weidmann presents the Bundesbank’s annual report.

In the U.K., its a quiet week for data, with confidence and housing reports the most prominent. Meanwhile BOE officials Andy Haldane and Jon Cunliffe are due to speak. Hungary’s central bank holds rate-setting meeting on Tuesday. It’s a meeting to watch as policy makers hinted they may use all tools: while a change in rates is unlikely, the post-decision statement may hint at the end of the ultra-dovish era.

Slowing inflation and a strengthening currency are putting pressure on the Bank of Israel to take a move dovish stance, but solid economic growth in the fourth quarter means the central bank is likely to hold interest rates again on Monday. South African Finance Minister Tito Mboweni budget’s on Wednesday could be key in determining whether Moody’s Investors Service downgrades the nation’s debt to junk status next month.

Also on Wednesday, Botswana’s central bank could cut interest rates again to boost slowing economic growth. While inflation in Mozambique is still low and the IMF has said there is room to cut, the metical has weakened to the lowest level against the dollar since 2017, which means the central bank may continue to hold rates on Thursday.

On Tuesday, Federal Reserve Vice Chairman Richard Clarida discusses the outlook for interest rates and the economy at a conference in Washington, where speakers will also include IMF chief economist Gita Gopinath and Cleveland Fed President Loretta Mester. Later in the week, reports on consumer spending and durable-goods orders are expected to show the U.S. economy off to a modest start to 2020, while the Fed’s preferred inflation gauge may have accelerated to the fastest pace in a year.

Canadian fourth-quarter GDP data out on Friday will show the extent of the Canadian economy’s slowdown at the end of last year, and whether the nation’s expansion has any momentum at all going into 2020. Earlier in the week, Bank of Canada Deputy Governor Tim Lane gives a speech on digital currencies.

Mexico takes center stage in Latin America this coming week with Brazil and Argentina celebrating the Carnival holiday through midweek. Monday’s bi-weekly consumer price report is followed a day later by the final reading on fourth-quarter gross domestic product, which should affirm that the economy in 2019 posted its worst performance in a decade.

On Wednesday, the central bank’s quarterly inflation report updates official forecasts for all manner of economic indicators. Capping the week, the minutes of Banxico’s last meeting published Friday will likely cement bets that a sixth straight interest-rate cut is in the offing when policy makers meet next month.

To contact the editors responsible for this story: Simon Kennedy at skennedy4@bloomberg.net, Zoe Schneeweiss