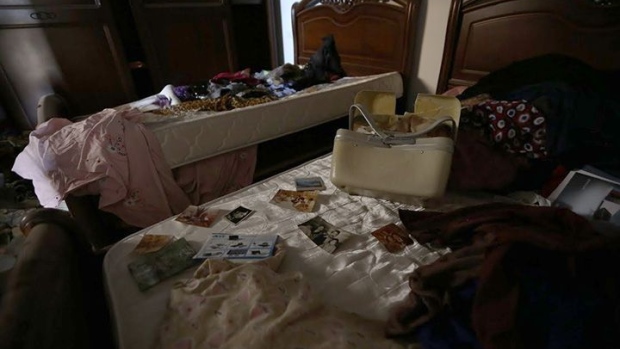 (Bloomberg) -- Zahra al-Fituri wandered silently through her old home on Tripoli’s front line, picking up fallen objects and stepping over dust-covered clothes. A year after fleeing, the teacher found the house ransacked but in better shape than neighboring properties that were virtually destroyed as the streets were overrun by fighters loyal to eastern military commander Khalifa Haftar.

She opened windows to let in the light and let out the foul smell of food still rotting in the freezer, months after the power went out in the southern suburbs.

“The looters unearthed all sorts of things I hadn’t seen in years, including this,” the mother of three said, her eyes filling as she looked through a stack of old family photographs. “Coming back won’t be easy. We’ll need a while to get the place back to what it was, for life to return.”The battle for Tripoli has been won, bolstering the internationally-recognized government of Prime Minister Fayez al-Sarraj, as Haftar abandoned his 430-day campaign to capture the capital. But Libya’s war is far from over, and concern is mounting that the OPEC producer could go the way of Syria, prompting new waves of migration and militancy on Europe’s doorstep.

The Ministry of Local Government estimates that about 125,000 homes have been damaged in southern Tripoli, where Haftar’s forces were holed up for months. The fighting forced roughly 85,000 families, or nearly half a million people, to flee.

It also dragged in foreign powers, with Russia, the United Arab Emirates and Egypt backing Haftar’s march from his eastern stronghold of Benghazi, and Turkey intervening on behalf of the Tripoli government 1,000 km to the west. Both sides deployed Syrian and other mercenaries, entangling local grievances with regional rivalries and potentially complicating efforts to establish lasting peace. The U.S. and European powers are pushing for peace talks but have struggled to impose a UN arms embargo on a country that’s home to the world’s largest uncontrolled munitions stockpile.

What’s Behind Nine Years of Turmoil in Libya: QuickTake

Libya’s crude exports have fallen by more than a million barrels a day since Haftar shut down the biggest oil ports in January to pressure the Sarraj government. Proceeds normally go through the National Oil Corp. (NOC) to the Tripoli-based central bank, but Haftar wants the regulator to allocate more funds to the east—an unresolved dispute at the heart of Libya’s divisions.

While Haftar’s efforts to export crude independently of the NOC have been thwarted, repeated disruptions have roiled global oil markets and deprived the economy of its main source of dollars. That’s again hitting the currency. A year ago, the U.S. dollar was worth roughly 4.5 dinars on the black market. Now, it’s closer to 5.5 dinars.

“The most dangerous risk for Libya is that it could quickly find itself facing expanded conflict,” wrote analysts Emaddedin Badi and Ranj Alaaldin in a paper published by the Washington-based Brookings Institution on June 15. “If international actors remain involved, Libya could resemble Syria’s landscape, with years of substantial arms influxes and a rapid proliferation of disparate external mercenaries. If international support for Libyan actors wanes or disappears, local grievances will take center stage, violently.”

Talal al-Naili, who fled last summer to the nearby city of Zawiya, came back to find the contents of his car workshop in Mashrou al-Hadaba looted. “Nothing was left but the remnants of the bullets on the door locks,” he said.

Naili would need a loan to reopen his business but sees no point taking on such risk unless residents, now renting smaller apartments or staying with relatives in central Tripoli or elsewhere, return. Shops and businesses were forced to close across stretches of southern Tripoli, but so did bank branches, schools and offices. As the front lines shifted, the damage spread, encircling the seaside city with destruction.

Since Haftar’s Libyan National Army (LNA) withdrew late last month, residents have returned to see what remains of their homes, clambering over rubble and losing their way in streets rendered unrecognizable by shelling, airstrikes and street combat.

With the support of Russian mercenaries, Haftar came close to seizing Tripoli late last year after sweeping through Libya’s sparsely populated south and capturing its largest oil fields; he was already in control of the main crude export terminals in the north. Turkey’s intervention turned the tide, forcing him back to the central city of Sirte, gateway to the oil crescent and the likely backdrop to the next chapter in Libya’s conflict.

Having scorned past peace efforts and under pressure from his international backers, Haftar acquiesced to an Egyptian-mediated truce offer. This time, it’s the Tripoli government that’s ignored it, signaling that, with Turkish backing, it seeks to push Haftar back further.

For now, the halt to hostilities looks unlikely to herald a resumption of oil exports. That means efforts to rebuild devastated infrastructure will be slow, with the latest damage adding to festering destruction from earlier convulsions of violence.

Ayad al-Qunaidi, head of a committee tasked with rehabilitating the power grid in affected areas, said the infrastructure in parts of southern Tripoli was “completely destroyed.”

The damage adds to a lengthy list of problems. Even before Haftar’s assault, daily blackouts stretched from eight to 10 hours, and teachers, doctors and civil servants went for months without pay. Water supplies are regularly disrupted by armed groups.

Qunaidi said work has begun on repairing the network in some areas. In others, an additional remnant of war has been hampering progress.

Libya’s Civil War Is Far From Over: Bobby Ghosh

Around noon on a recent Thursday, Rabih al-Jawish, head of programs at Free Fields Foundation, a Libyan mine action group, wove his way around sandbag roadblocks into Salaheddin, among the most heavily hit areas. Soon after he arrived, Jawish received a call from a civilian who’d found an unidentified object in his home.

“Don’t touch it, and move away,” he told the man. “Our team will come to you.” On the way, another man stopped Jawish to say he’d also found a mine inside his house. Jawish tried unsuccessfully to defuse it before promising to return with an ambulance on standby.

In a nearby room, the blood hadn’t dried. The owner said two people were wounded half an hour earlier by what, after a brief inspection, Jawish identified as a modified hand-grenade—one of potentially thousands of explosive devices planted in residential areas by the LNA and allied Russian mercenaries as they left. Amnesty International says they include Russian and Soviet-era anti-personnel mines banned by international law due their indiscriminate nature.

Mines and unexploded ordnance have, so far, killed 39 people and wounded 71. Clearance efforts have been hampered by civilians swarming the areas in defiance of warnings.

On the way out of Salaheddin, Jawish pointed to a dirt road no more than 300 meters long and said: “We’ve cleared 107 mines from that street.”

Nearby, a removals truck piled high with furniture prepared to leave. From the passenger seat, Ali al-Maryami said he was salvaging what he could from the house his family fled during the fighting, until such time as they could return.

“I can’t afford to rent an apartment at 3,000 dinars a month forever,” he said. But “the area is frightening now. There’s no one here at night.”