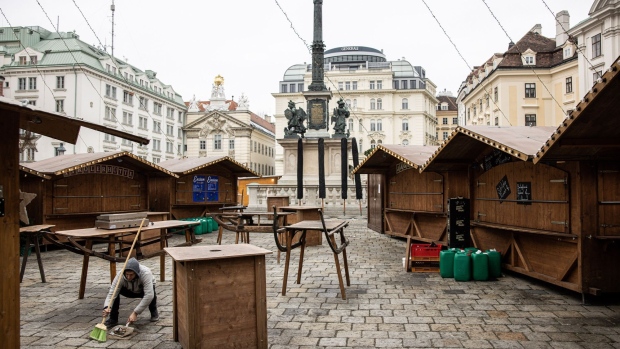 (Bloomberg) -- On Monday morning, Austria’s near-9 million residents woke to life in lockdown. Days later, a new Covid-19 variant set off alarm bells across the world, Europe and the U.S. slapped a travel ban on countries in Southern Africa and health officials raced to get ahead of a new threat.

It was the week the coronavirus reminded the world that the pandemic is far from over, delivering a combination punch of escalating infections, restrictions and a new mutation. The developments, marking a setback in the battle against the disease and a dent to the economic recovery, slammed equities and oil prices.

Governments went to the tried and tested virus-fighting tools in their playbook as cases in Europe spiked.

Germany tightened restrictions for the unvaccinated, France toughened rules on mask wearing and health passes, and Austria closed businesses from hotels to gyms. Belgium ordered nightclubs to close, and banned the public from indoor sporting events.

The U.K. ruled out tightening pandemic rules, but was quick to halt flights from six countries once news of the variant — B.1.1.529 — emerged. The European Union proposed the same measure as several of its member states went ahead and restricted travel.

For London, it was a case of once bitten, having learned the price of dithering when it was slow to react to the delta variant, which has half as many mutations as B.1.1.529. Travel bans may be unpopular in some quarters, but it’s easier than hitting a weary public at home with lockdowns and other curbs on socializing.

There’s a sense that this script has become depressingly familiar after almost two years — but that familiarity also leavens the sense of panic that's greeted the arrival of previous variants.

Across Europe, peoples’ reaction to the recent news was far more muted than in the early months of the disease, a shift from fear, even panic, to resignation. This is the Covid world. The foreseeable future will bring rises and falls in infections, variants, intensive care needs and deaths — as well as the accompanying litany of measures from masks to tests, partial or full lockdowns, travel limits and booster vaccines.

In Italy for example, the first European country to impose a nationwide lockdown in early 2020, gone are the days when people disinfected the supermarket shopping before it entered their homes, and the daily toll of cases and fatalities monopolized attention.

Back then, Italians watched aghast as army trucks were called into the northern town of Bergamo to ferry coffins away because the crematorium could no longer cope.

A few days ago, even as the country’s daily infections were rising at the fastest pace in six months, the mood was far different. At a bar in a trendy area near Rome’s main railway station, a group of locals celebrated a 50th birthday with freshly-baked pizza and wine.

No one wore masks as the party-goers milled about. Only a couple of the guests remarked afterward that staff had failed to check vaccination certificates, as required by law.

“As long as there are no further government directives related to the new variant, people will keep on living their lives as usual,” said Simone Schnall, professor of experimental social psychology at the University of Cambridge. “There’s currently a mix of emotions that also includes frustration or anger… Many people just won't be able to stomach the prospect of yet another largely compromised Christmas.”

BioNTech SE, which has developed one of the most widely used Covid vaccines with Pfizer Inc., offered another reason to not panic. It expects data on how the variant interacts with its shot within two weeks. A new version could be ready in 100 days.

And more protection against the disease is coming — at some point — in the form of anti-viral pills.

If the vaccines still offer a chance of that, it wasn’t what markets heard on Friday.

They reacted to the variant body blow with a sell-off. European stocks fell the most since June 2020, the Dow Jones dropped more than 1,000 points at one stage and oil tumbled through $70 a barrel in New York for the first time since September. U.S. Treasuries jumped, sending yields down the most in a year.

For aviation and other travel-dependent segments, the spread of a new variant threatens a return to the disruption caused by delta’s rise earlier in the year, when it delayed a rebound in flying at the start of the northern hemisphere’s summer high season. Investors are worried that a third summer may be put at risk if people hold back from making plans early in 2022.

But health experts say it’s going to take time to know what the variant means for the global virus battle. In the meantime, UBS AG economist Paul Donovan noted that fear of the virus is what causes the most economic damage.

“We need to get used to the fact that there will be large numbers of variants appearing globally over the coming months and years,” said John Bell, professor of medicine at the University of Oxford, who’s been working with the U.K. on its Covid response. “Stay calm, track the data, understand this particular pathogen and respond. We will need to do this again and again in the future.”

As the week drew to a close, another taste of deja vu loomed. The World Health Organization classified B.1.1.529 as a variant of concern and called it omicron.

Yet another Greek letter to add to the long-running Covid conversation.